NVIDIA (NASDAQ:NVDA) stumbled into the year after seeing sales of its gaming graphics cards fall off a cliff in the fiscal fourth quarter, caused by too many cards sitting in the channel inventory following the collapse of the cryptocurrency market last year.

Management initially guided in November that it would take a few quarters to sell through the excess supply and get gaming back to growth mode, and that process seems to be mostly complete. In the fiscal first quarter, gaming revenue was down 39% year over year but grew 11% over the previous quarter. Management sees gaming fully normalizing by the second or third quarter.

Meanwhile, the underlying dynamics of the gaming business seem strong. Sales of gaming laptops are exploding, and NVIDIA's new Turing RTX graphics cards are gaining industry acceptance as the new standard for the next generation of games. Overall, there are three signs NVIDIA's largest business segment is returning to growth. 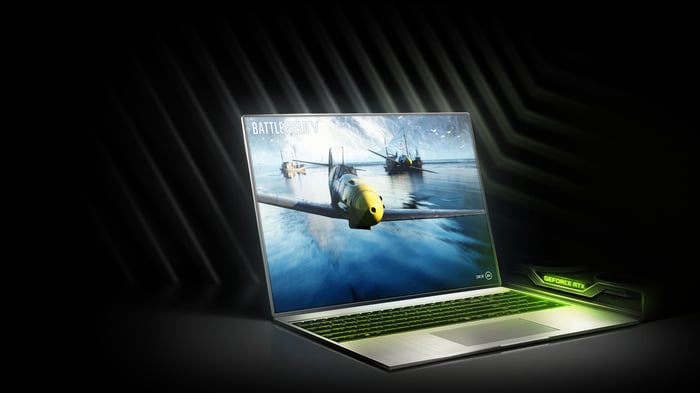 The fastest growing hardware in the gaming industry is not the Nintendo Switch or Sony's PlayStation 4. It's NVIDIA's Max-Q gaming notebooks.

Last year, it was difficult to gauge the actual growth coming from PC gamers, since cryptocurrency miners were in the market for the same cards. The most reliable indicator that NVIDIA's gaming business was still healthy was the growth in gaming notebooks, which saw soaring demand last fall, with sales up 50% year over year in China.

In a world of smartphones and tablets, PC gamers are looking for a thin, portable device that runs the latest games. Because of this need, gaming laptops have been gaining wider adoption for several years. Global sales soared from around $1 billion in 2013 to around $12 billion in 2018.

NVIDIA's Max-Q notebook design has been a leader in this market that allows original equipment manufacturers (OEMs) to pack a lot of graphics processing power into a sleek form factor that is lightweight. The number of new Max-Q notebook models in production this year is double that of last year.

Because of these trends, CEO Jensen Huang sees a big year ahead for gaming laptops: "This year, we have some hundred notebooks that are being designed at different price segments by different OEMs across different regions. And so, I think this year is going to be quite a successful year for notebooks."

In September of last year, NVIDIA launched the new Turing generation of graphics processors. There was a mixed reaction from PC gamers partly because there were no games immediately available on the market capable of taking advantage of the new graphics-rendering technique known as ray tracing, which allows for more realistic light and shadow effects in games.

It's still early in this new generation of Turing RTX gaming cards -- only about 2% of GeForce users have upgraded. It generally takes three to four years for a new generation to gain widespread adoption. For one, gamers will want to see more games offering ray-tracing features before spending hundreds of dollars on one of these new graphics cards, especially when the previous Pascal-generation cards are still capable of playing the most popular games on the market at high graphics settings.

Nonetheless, NVIDIA looks well positioned to maintain its dominant market share in gaming cards. The company is already calling its ray-traced graphics technology the standard for the games that will come out in the years ahead. The company supported that bold claim by pointing to the adoption of ray tracing by the industry's most influential game engines, including Microsoft DirectX, Epic Games' Unreal Engine, Electronic Arts' Frostbite, Unity, and several others.

3. Margins are back on the rise

In a recent investor day presentation, NVIDIA said that most gamers who have upgraded to RTX are moving up the price ladder to more expensive cards, which bodes well for margins. In recent years, NVIDIA has done an excellent job structuring its gaming card lineup to allow for increases in average selling prices and margins. As a result, NVIDIA has seen margins significantly improve over the last three years. 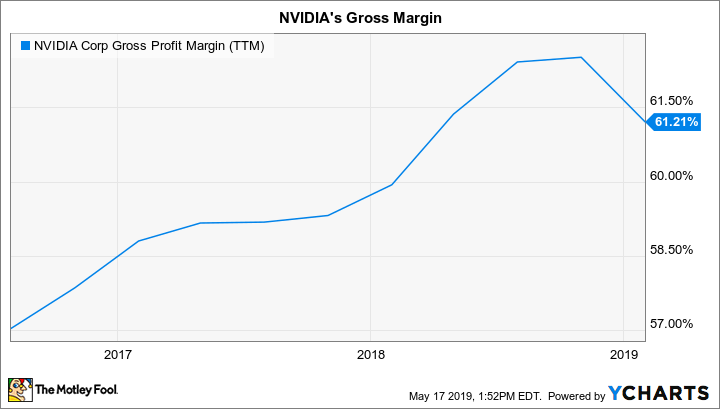 With the recent drop in gaming revenue, NVIDIA saw its adjusted gross margin decline. But as gaming sales start to grow again, margins are set to rise this year.

With NVIDIA's largest segment returning to growth, the worst may be behind the company, and it could be all upside from here.