And most importantly: Your golden years can be golden, even if you aren't staggeringly wealthy.

Today's retirees should be miserable.

According to Transamerica's A Precarious Existence: How Today's Retirees Are Financially Faring in Retirement (this link opens a PDF version of the report), retirees generally retired earlier than they planned. And the majority of those early retirements were due to poor health (28%), job loss (24%), and family responsibilities (15%). Only 10% retired early because they'd actually saved enough money.

The median retiree today has a measly $75,000 in household savings, excluding home equity (which is only another $79,000). Their median household income is $32,000, and 66% report that Social Security will be their main income source in retirement.

Since Social Security is designed to replace only about 40% of a retiree's preretirement income, it's no surprise that a full 59% say they spend less in retirement than during their working years.

Their financial picture is, frankly, pretty grim. However, they're not fully miserable.

Don't take my word for it -- 40% of respondents to Transamerica's study indicated that they were enjoying their lives more than before they retired, and 39% indicated that their enjoyment was unchanged. Only 19% said they had felt a decline in life enjoyment. 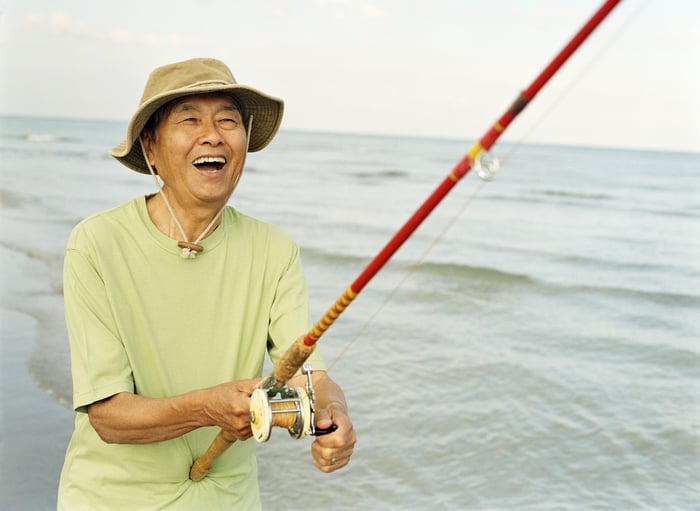 T. Rowe Price's 2019 Retirement Savings and Spending survey found 80% of retirees answering that they strongly or somewhat agreed with the statement "I am enjoying my retirement years more than my primary working years."

Despite spending less money and facing a much less certain financial future, retirees are handling retirement very well. Transamerica's study found that the vast majority are optimists, too, with 91% of respondents describing themselves as "generally happy people."

Here's my best guess as to why

It's called "hedonic adaptation" -- the tendency to get used to changed life circumstances. (My colleague Brian Stoffel recently published an excellent article on hedonic adaptation that covers the concept in far greater depth than I ever could here.)

So when you have to start pinching pennies (in, say, retirement), your life satisfaction dips then gradually reverts to the mean. And the same thing happens in reverse if you, say, get a big raise at work or start living at the beach -- sure, it's awesome for a little while, but gradually it becomes normal.

Now here's where it gets interesting

Retirees hedonically adapted to spending less money because their circumstances forced them to. They hadn't saved enough to maintain their previous standard of living, they had to retire, and now here they are.

But if you're still working, you can choose to adapt to living more frugally. There are a number of ways to reduce your spending, but the key is to try to do it many years before you retire so time can work in your favor.

Whatever you do, please don't take this article to mean that I think you shouldn't save a ton of money for retirement.

It's just that, as it turns out, money isn't the only key to happiness. Even though they're facing their fair share of financial strains, today's retirees are pretty happy living more frugally than they did when they worked.

So consider practicing that frugality earlier, and save lots of money -- it could change your future. Give yourself an enormous margin of safety, if you're able (particularly on healthcare expenses). But whatever you do, don't spend your working life dreading retirement because you don't think you have enough saved to maintain your current standard of living. It seems that, for many retirees, things have a way of working themselves out.