Please ensure Javascript is enabled for purposes of website accessibility
Log In Help Join The Motley Fool
Free Article Join Over 1 Million Premium Members And Get More In-Depth Stock Guidance and Research
By Brian Stoffel – May 4, 2019 at 6:48AM

A simple question to help align your life: How much is enough?

In 1957, the typical new American house was 983 square feet. The average household income -- in current dollars -- was about $35,000. And 53% of Americans declared themselves "very happy"; only 3% described themselves as "not very happy."

Sixty years have passed, and our lot has improved enormously. Income is up 75%. The average new house is two to three times bigger. Fewer people are in poverty. Fewer people are victims of violent crime. More youths are attending -- and graduating from -- college. 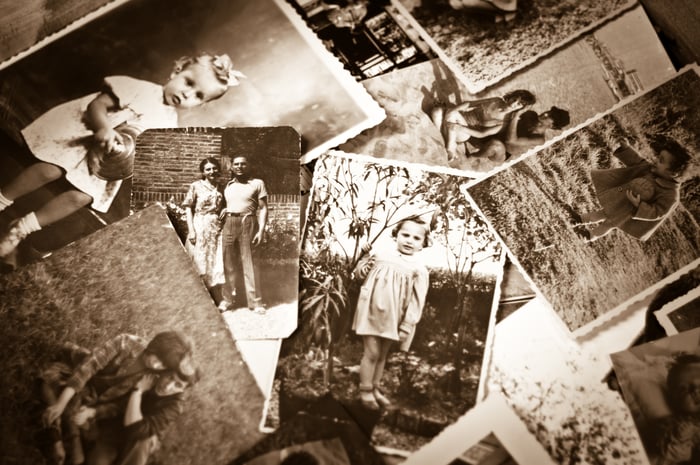 But here's the thing: Today, only one-third of Americans qualify themselves as happy. And if you think subjective questionnaires are unreliable, consider these objective facts:

There's no silver bullet -- but a 1% factor looms large

In the 1920s, Vilfredo Pareto, an Italian economist, noted that 20% of the Italian population owned 80% of the land. He noticed the principle in other places -- 80% of his peas, for example, came from 20% of his pea pods. Simply put: A few inputs often account for the most output.

But people usually stop at 80/20. They need to take it a step further. The Pareto Principle is fractal: It continues to break down using the same rules.

Think of the leverage: If you can figure out what that crucial 1% is -- a daunting task to say the least -- you can get half of what you want. 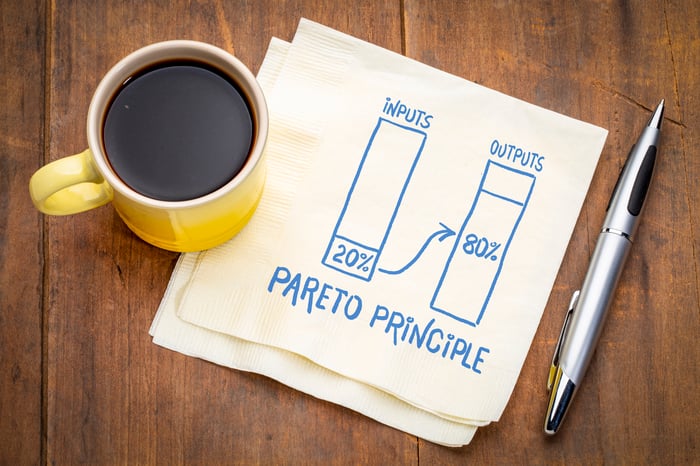 When it comes to our growing dissatisfaction in America, hedonic adaptation doesn't explain it all. But I believe it represents the small factor that explains at least half of what's going on. I also believe it could end up being our saving grace.

What, exactly, is hedonic adaptation?

Hedonic adaptation is really just another way of saying: "Once you get used to the thing that made you happy, it no longer makes you happy." The most famous example of this has to do with unexpected success.

A study in the late 1970s followed recent lottery winners and measured their happiness over the course of the year. While there was an initial bump following the win, the enjoyment of everyday activities one year later was rated at a 3.33 on a 5.0-point scale.

Another group was followed at the same time: newly para- or quadriplegic victims of accidents. One year later, enjoyment of their daily activities clocked in at 3.48 -- higher than that of the lottery winners.

There's a vital lesson here. Hedonic adaptation also means "Once you get used to the thing that made you sad, it no longer makes you sad." The implications for your finances and happiness are enormous. We can adjust to having less "stuff" with no long-term effect on our well-being. 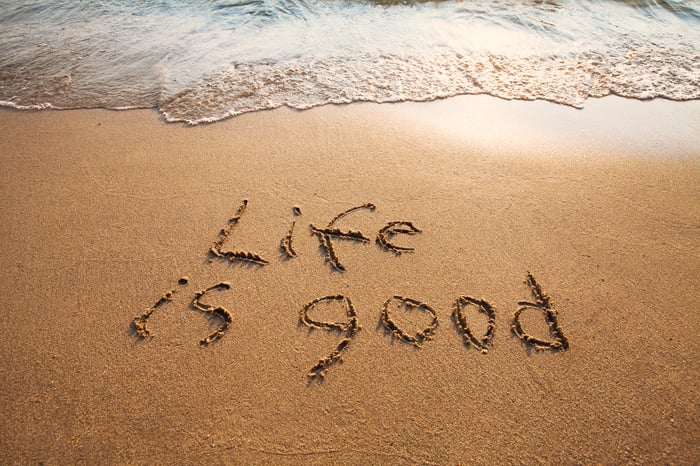 Sonja Lyubomirsky is a professor of psychology at UC-Riverside. Her book, The How of Happiness, offers clues as to what we hedonically adapt to and what we don't.

When evaluating happiness, she believes it all boils down to three factors:

The breakdown of how each factor affects our happiness looks like this: 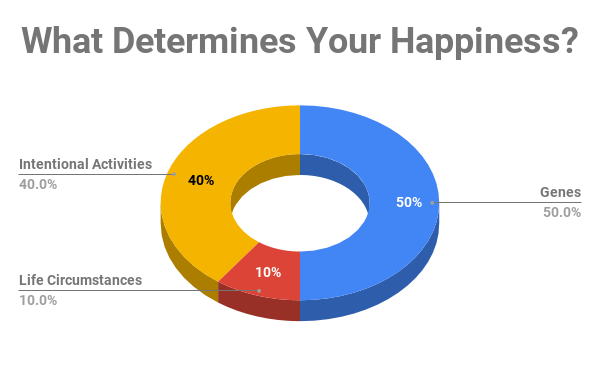 We only have any say over the last two factors. American culture has already cast its ballot: Life circumstances get the lion's share of attention. That's a big mistake, says Lyubomirsky. By a factor of four-to-one, intentional activities are what moves the happiness needle the most. 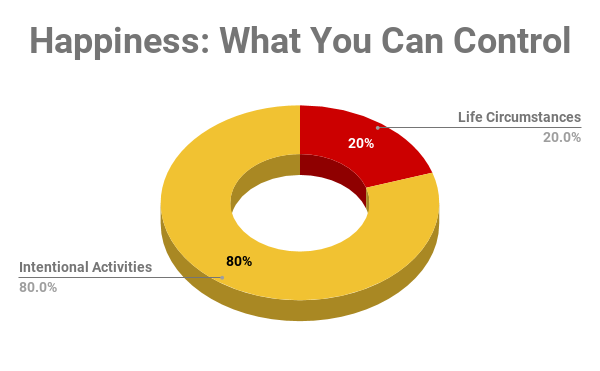 Why is that? Because we hedonically adapt to life circumstances. The same is not true for intentional activities -- they are the gifts that keep on giving.

They generally fall into one of four buckets:

Yet most of us have gotten it completely backwards: We are spending the bulk of our time on life circumstances, which only have a small effect. We're spending far too little time on intentional activities, which is where the real leverage is in building happiness.

Lyubomirsky isn't alone: In the longest-running study of its kind, two groups of men from Boston -- one a cohort of Harvard students, the other a group of poorer inner-city residents -- were followed for decades. Gobs of data were collected, but one conclusion stood above the others:

Close relationships... are better predictors of long and happy lives than social class, IQ, or even genes. That finding proved true across the board among both the Harvard men and the inner-city participants.

Relationships check all of the boxes for healthy intentional activities:

Time with those closest to us -- working on things that are engaging and give us purpose -- is the only remedy. But to accomplish that, there are two resources more precious than all the others: time and attention.

Make hedonic adaptation work for you -- not against you

And so, to get our time and attention back, we can use the same tool responsible for taking it away: hedonic adaptation. Berkshire Hathaway's Charlie Munger says that when approaching any problem: "Invert, always invert." This is how hedonic adaptation can save us.

Everything in your life extracts resources. But the key is whether we're doing a good job investing those resources. Ask yourself: "If this thing disappeared from my life, one year later, would it really make a difference?"

If I took away your fancy car and replaced it with a boring but reliable vehicle, you'd probably be angry at first. But if the replacement got you from Point A to Point B safely, chances are that you'd adjust. Your happiness level probably wouldn't be too severely affected 365 days later.

On the other hand, let's say that I deny you the opportunity to connect with anyone close to you -- family, friends, your spouse -- for more than 30 minutes a day. How will you be doing one year later? My guess: clinically depressed, perhaps divorced, and physically ill.

When we look at life this way, the effects of our choices seem obvious. But think about that one-hour commute (each way) to work while raising a family. "It's my dream job," you tell yourself. But you know there's another less glamorous position five minutes from home that could support your family. People make this trade-off all the time, often without even thinking about it. Yet researchers have found that eliminating an hour-long commute (each way) has the same lasting effect on happiness as a $40,000 raise.

This, then, can become a litmus test of sorts for our level of Enough: How would this change things one year from now?

It almost seems like an afterthought, but taking this approach to gauging your consumption and personal happiness has a profound effect on your net worth. For most (but not all), discovering your level of Enough lowers spending.

This gives you more money to save and invest, and it lowers the bar for how much money you feel you need. Your chances of becoming financially independent jump exponentially.

It might sound cool to say you retired at 30, but that's just a side benefit. Living a life of contentment that revolves around purpose and meaning, engagement, and relationships is the primary goal.

This financial freedom lets you put the most important things front and center in your life. At the end of the day, that's the best way to leverage your finances.