Please ensure Javascript is enabled for purposes of website accessibility
Log In Help Join The Motley Fool
Free Article Join Over 1 Million Premium Members And Get More In-Depth Stock Guidance and Research
By Travis Hoium – Updated May 21, 2019 at 1:27PM

The solar industry has overcome a lot to reach 2 million installations, but its momentum may just be getting started.

The solar industry in the U.S. is now so large that 2 million separate installations are in service across the country, according to Wood Mackenzie Power & Renewables and the Solar Energy Industries Association (SEIA). Projects can be as big as a few square miles, but most are small, with 96% of the installations on residential rooftops. This type of installation is the specialty of Tesla (TSLA -4.59%), Sunrun (RUN -5.01%), and Vivint Solar (VSLR). The big projects are built by companies like First Solar (FSLR -1.46%) and financed by utilities and asset owners like NextEra Energy Partners (NEP -2.47%) and TerraForm Power (TERP), which have put billions of dollars into their solar projects.

It took the industry over 40 years to reach 2 million installations, but analysts now expect the next 2 million to take just four years to install. As the industry grows in both scale and geographic reach, it creates more opportunities for investors. 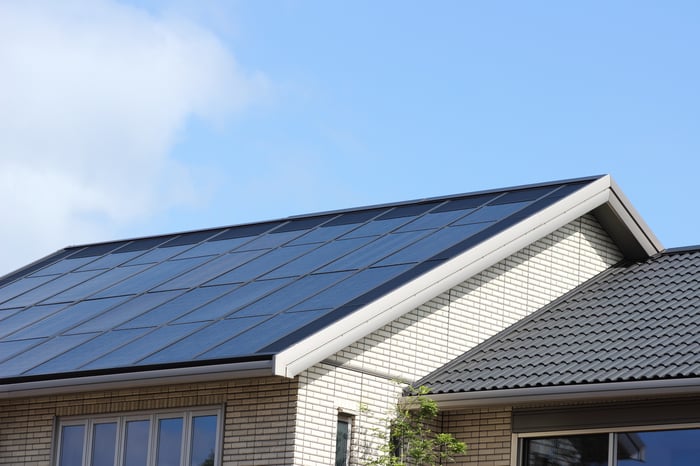 Where solar energy is going

According the the SEIA's data, California accounted for 51% of the first 1 million solar installations in the U.S., so it is certainly the industry's hub. But among the second million, the state accounted for only 43% of installations, so geographic diversity is improving. In the last few years, states like Florida, Texas, and Minnesota have opened up as large growth markets, and economics, not subsidies, are driving the industry's growth.

Large-scale projects continue to account for a minority of installations, but a vast majority of new solar capacity. According to the SEIA, in 2018, 58% of the 10.6 gigawatts (GW) of solar power installed was for utility-scale projects. This indicates a big opportunity for companies like First Solar, NextEra Energy Partners, and TerraForm Power if they land the big projects that get built.

On a broad level, solar energy is starting to have a big impact on electricity production overall. In 2018, large solar projects accounted for 1.5% of the electricity produced in the U.S. and production was up 37 times from 2011. At the rate solar is being installed, it will take about two to three years to account for another 1% of production, and if current trends continue, it could overtake coal in market share by the end of the next decade. The solar industry is here to stay, and it's getting bigger by the day.

Who's leading the way?

I mentioned that the three leaders in the number of solar installations are residential installers. Today, Sunrun has the market share lead, followed by Vivint Solar and Tesla. They're doing the hard work of pushing individual solar installations forward on a small scale. The business has proven to be up and down financially, with most companies reporting net losses, but they control the largest number of installations overall.

SunPower (SPWR -1.95%) is the one company to watch in the commercial solar market. This consists of installations on big-box retailers and school carports, where solar can be installed close to demand. The company has the leading market share in the industry and is adding energy storage to more than one-third of commercial solar installs. Like residential solar, margins are weak in the commercial segment, but if SunPower can use scale and improving solar panel efficiency to improve costs, it could be a big winner in solar long-term.

Utility solar is highly competitive, and the one company that stands out is First Solar. The company is among the largest solar manufacturers in the world and expects to have $1.6 billion to $1.8 billion of net cash on the balance sheet at the end of 2019, which compares to billions in debt for most solar companies. First Solar provides parts and sometimes does development, so the other part of the market to keep an eye on is asset ownership by companies like NextEra Energy Partners and TerraForm Power. The companies use the cash flow from operations to pay dividends, which currently stand at 4.3% and 5.9% respectively. For investors looking for stability and cash flow from solar stocks, these are a great place to start.

A trend that won't be stopped

Whether you invest in solar stocks or not, the industry is worth watching because it has the potential to upend everything we know about energy. More solar energy hits the earth every hour than the world consumes in an entire year, so this is by far the most abundant source of energy on earth. The cost of solar power is also coming down so quickly that in competitive electricity markets it's beating coal, natural gas, nuclear, and wind on an unsubsidized basis.

Solar energy has its challenges, like energy storage for off-peak hours and seasons, but the starting point of a cost structure low enough to compete with fossil fuels is already established. Even tariffs have done little to slow the solar industry, and with 2 million installations under its belt and a growing market share of U.S. energy markets, it's an industry that could cause major disruptions in the future.