Please ensure Javascript is enabled for purposes of website accessibility
Free Article Join Over 1 Million Premium Members And Get More In-Depth Stock Guidance and Research
By Daniel B. Kline - May 20, 2019 at 10:47PM

The popular game goes in a new direction.

For many adults, it is hard to understand why kids love to play Minecraft. Instead of pushing CGI boundaries, the game has a retro look -- and gameplay that appears to make very little sense.

That did not stop Microsoft ( MSFT 0.01% ) from spending $2.5 billion to buy Mojang, the developer of the popular game. Since that purchase just over a year ago, not much has changed for Minecraft. The game remains popular but it's no longer a white-hot title, having lost some of its mojo to Fortnite. 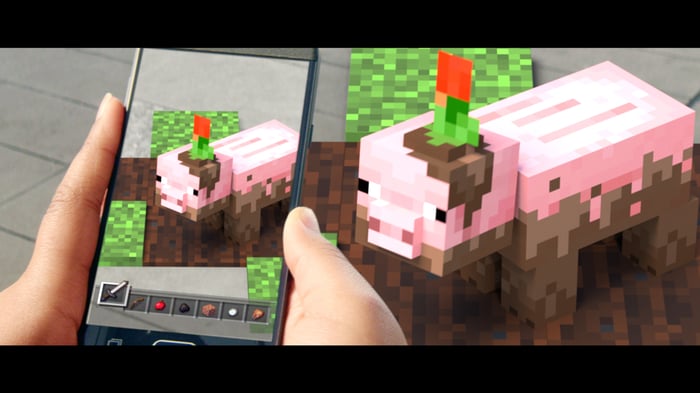 AR is reality with a twist. Technology superimposes computer-generated images over what you see in the real world. The best example -- and the one Minecraft Earth won't be able to avoid comparisons to -- is Pokemon Go.

That game, which briefly became a phenomenon, layers Pokemon characters into real settings, and players can "catch" those computer-generated characters. As you play, the character Pikachu might pop up in the cafe where you're having coffee or a Charmander might be running amok at your grocery store.

It's a clever, engaging game (some would argue too engaging, as some people got hurt by engaging with the game and not paying attention to the real world) that showed people the possibilities of AR. Microsoft wants to build on that but seemed a little dismissive of the competition, in comments reported by Geekwire.

"It's not just a geocaching game with, like, 2% of it in augmented reality," said Minecraft Game Director Torfi Olafsson. "We decided to go headfirst and build the game from the ground up as an experience that you play both in your immediate environment -- when you're home -- and out in the world, like in parks, in cities."

Minecraft Earth aims to deliver a more social experience than Pokemon Go. To complete some "quests," players must be in the same room in real life. The game, it's important to note, isn't a new version of Minecraft. It's the core game in a new setting, which should make the learning curve minimal for new players.

"This is a social experience from the ground up," Olafsson said. The game will roll out in tests this summer.

What does this mean for Microsoft?

This takes an already popular game and brings it to a new platform. That gives it the potential to be a hit, and it's a sort of backdoor way for Microsoft to get more people to experience AR, an area where the company has invested heavily.

We're still in the early days of AR -- the fun, experimental phase. If games like this catch on, however, it's easy to see business and education uses for the technology -- beyond learning the names of various Pokemon.

So far, AR and virtual reality have mostly been novelties. A game can be the sort of "killer app" that takes a trend with potential and makes it mainstream. Minecraft Earth could be the product that helps do that. Or it could just be another way to keep people hooked on Minecraft.