Every investor needs a security blanket -- that piece of the portfolio that needs no attention and doesn't keep you up at night. Businesses that fit the bill are rare, but they're out there.

Dividend Aristocrats are a good place to start. There are only a couple dozen of them, but these companies boast an annual dividend hike in every year for at least the last 25. Three that look especially stable to our Motley Fool contributors are Walmart (NYSE:WMT), Target (NYSE:TGT), and Abbott Laboratories (NYSE:ABT).

The king of commerce looks unbeatable

Nicholas Rossolillo (Walmart): Brick-and-mortar retail has been a touch-and-go proposition since the advent of digital retailing. Amazon.com and a slew of online-only stores have made life difficult for traditional stores, and many have closed their doors in the last few years. Even the world's largest retailer, Walmart, looked like it was in a precarious position at times.

My, how things change quickly, though! While Amazon's retailing division is slowing down, Walmart has been growing its e-commerce segment at a torrid pace. During the first few months of 2019, its digital channel surged 37% year over year while Amazon's grew only 10%. As a result, Walmart had its best quarterly comparable-store sales growth (a combination of ticket size and foot traffic) in nearly a decade, with the metric rising 3.4% during the period.

Walmart has been able to strike back at the digital movement after a string of e-commerce acquisitions and doubling down on its real estate. Whether you're a fan or not, the combination of physical locations with a much-improved online store has put the company back in growth mode and speaks to the strength and staying power of the big-box store. It's a reason Walmart is a Dividend Aristocrat, one that investors are unlikely to have to worry about for a very long time.

Speaking of that dividend, after decades of raising its payout year-in and year-out, the annualized yield is currently a modest 2.1%. That's certainly not the best dividend payer out there, but some of that has to do with Walmart's share price surging 46% in the last three years. Annual shareholder pay raises have also gotten anemic as of late as the company has decided to use ample amounts of cash to continue investing in a digital future instead.

That may make some investors unhappy, but it's nevertheless another reason owners of Walmart won't have to worry about disruption anytime soon. In the meantime, enjoy the paycheck. 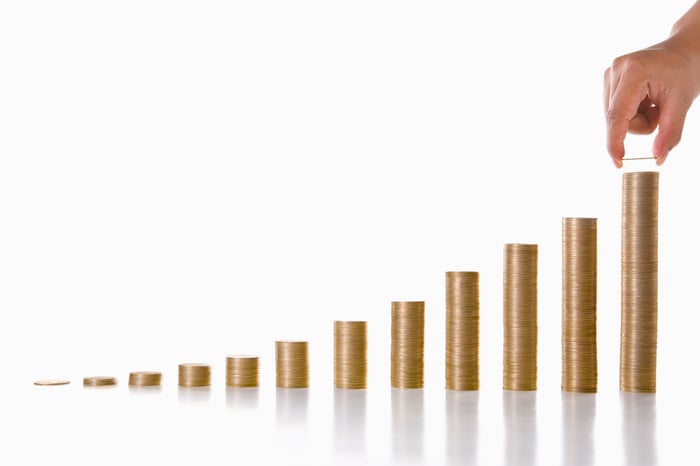 Dotting every "i" and crossing all the "tees"

Anders Bylund (Target): Far beyond just checking the boxes required to count as an Dividend Aristocrat, retail giant Target goes the extra mile. The company has increased its annual payouts in each of the last 51 years. I'm told that this streak is unmatched in the retail industry. Over the last decade, the increases have averaged 14.2% per year. The dividend yield stands at a generous 3.6% today, and Target has plenty of headroom for future increases -- only 54% of the trailing free cash flows were allocated to cover dividend checks.

So the dividend itself is about as solid as they come. On top of that, Target simply looks like a strong investment -- with or without generous payouts.

After a slump in 2016, Target came back swinging in the last couple of years. The stock has gained a market-beating 29% in two years, despite pulling back 20% below its 52-week highs. Investors seem to be nervous about this company's future despite a rock-solid holiday quarter and a successful focus on digital and online sales.

Trading at a mere 13 times trailing earnings and 11 times forward estimates, Target's stock is a fantastic deal right now. What more do you want from a long-term dividend play?

A good way to play a larger, aging population

Todd Campbell (Abbott Laboratories): Forever is a long time. Especially when it comes to investing. Let's face facts: Many of the companies we follow today won't be around in 20, 30, or 50 years. That may seem insane, but thinking Polaroid would fall from grace probably seemed insane 40 years ago, too.

Nevertheless, the odds of picking a forever stock might be improved by focusing on been-there-done-that companies in industries likely to enjoy long-haul tailwinds. For instance, medical device company Abbott Labs has not only been in business for over 130 years, it's also rewarded investors with dividend increases for 47 consecutive years, including a 14% increase in January.

The company's longevity could be due to its diversification. Rather than focusing on one indication, it markets products that help people with a variety of healthcare needs and ailments, including diabetes.

In fact, its diabetes exposure is a demographic tailwind that's a key reason I like this company for long-term portfolios. Globally, a larger, wealthier, and longer-living population has the International Diabetes Federation predicting the number of diabetics will climb to 629 million by 2045 from 425 million today. If that's right, then demand for diabetes devices, including Abbott's glucose monitoring systems, will likely support shares for a long time.

Diabetes isn't the only thing that could support its sales and dividends, though. It sells diagnostic products, nutrition products, and cardiovascular disease products, too. That gives it lots of levers to pull to keep the lights on.

Still unconvinced? Consider that it might not be long before you're rewarded with yet another dividend increase. The company expects double-digit earnings growth this year, so you probably won't have to wait very long for Abbott to boost its dividend payment yet again.