Please ensure Javascript is enabled for purposes of website accessibility
Log In Help Join The Motley Fool
Free Article Join Over 1 Million Premium Members And Get More In-Depth Stock Guidance and Research
By Lee Samaha - May 23, 2019 at 2:05PM

The agricultural machinery equipment company faces risk to its earnings from a virus in China.

Just when you think Deere (DE 3.80%) might be getting over the worst of the impact of the U.S./China trade conflict, along comes another set of issues to trouble the company's earnings outlook. It's even more frustrating when you consider that Deere seemed about to see a notable improvement in its key North American large agricultural equipment in 2019. Let's take a look at what's going on with Deere, and what it means to the investment proposition.

Why Deere's prospects got worse

Deere's second-quarter earnings report saw the company's management lowering its sales, earnings, and cash-flow generation forecast for 2019. The reason? It's largely down to a worsening outlook for U.S. farm income and a heightened sense of uncertainty around prospects for grain farmers.

Now let's turn to the reasons why. CFO Ryan Campbell discussed three related issues, and each had an impact -- albeit to different degrees.

All three have negatively affected Deere, but do the issues detract from the long-term thesis for buying the stock?

Why Deere's stock is attractive

After all, Deere continues to forge ahead with its aim of expanding its precision agriculture solutions. Agriculture is one of the key beneficiaries of the Internet of Things (IoT), and Deere is at the forefront.

Moreover, Deere's management has made it clear that forecasted growth in its key agriculture and turf net sales for 2019 is coming from the replacement market, meaning there could still be a pickup in expansionary spending to come. For reference, Deere's guidance still calls for its worldwide agriculture and turf organic sales to rise 5%, with negative currency effects reducing the reported figure to a 2% rise.

What matters and what doesn't

Turning back to the three issues highlighted by Campbell, the first is relatively easy to deal with. Unfortunately, dealing with the vagaries of the weather are part and parcel of investing in the agricultural equipment sector, and it doesn't make sense to make long-term investment decisions based on one season's weather. If the underlying end demand is there, farmers will eventually spend on planters and sprayers even if bad weather has delayed planting.

The second two issues, namely trade conflict and African swine fever, are somewhat more complicated, but the key takeaway here is that the latter appears to be far more important than the former.

The evidence behind this comes from a look at the latest United States Department of Agriculture (USDA) report on oilseeds. When the tariff war escalated in the summer of 2018, the most visible impact came from a significant increase in the spread between the price of Brazil's soybean exports and that of the U.S. The two usually track each other closely, but China's imposition of tariffs on the U.S. meant it would be demanding more from Brazil/Argentina. Consequently, by the middle of September, Brazil's export price was around $400 per ton, while the U.S. export price was as low as $300 per ton.

However, by the end of the year, the spread had closed, and according to the USDA data on the U.S. and Brazil, export prices are now similar, at around $320 per ton. In a nutshell, U.S. soybean farmers have done a good job of opening up new markets and selling to customers who might have formerly bought from Brazil, but who aren't now because China is buying more from Brazil as a result of tariffs on the U.S. The so-called filling of the gap. 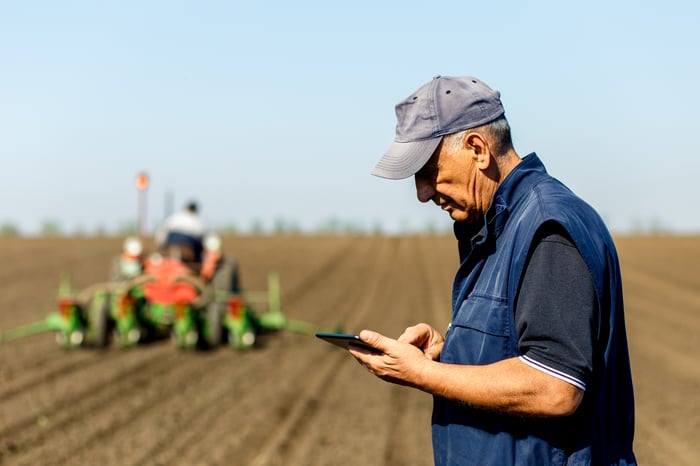 On the other hand, the USDA report is quite clear that

African Swine Fever (ASF) in China will be a game changer for the global oilseed complex, and soybeans in particular, in the coming years. China's Ministry of Agriculture and Rural Affairs reporting that the pig herd has declined by 20 percent since ASF was first reported in early August 2018.

The report goes on: "Consequently, large global supplies and lower demand in China will continue to pressure soybean prices; a situation that will likely continue as the industry adjusts to ASF."

Clearly, the issue is going to take time to resolve, and the outlook for one of the key farming crops appears to be dimming.

In the long term, Deere's stock still has attractions -- not least of which is the secular trend of precision agriculture, and at some point, the large agricultural equipment market will surely turn up again. However, the deteriorating outlook for soybean is likely to hang over the stock for a while, and the company's earnings could be challenged as a consequence.