Walmart answered back, however, investing heavily in online grocery ordering as well as pickup and delivery options. It now has about 2,450 pickup locations and 1,000 stores that deliver groceries to customers the same day they're ordered. Management expects those numbers to climb to 3,100 and 1,600, respectively, by the end of the year.

As a result of its rapid expansion, Walmart has gotten millions more consumers to try its online grocery ordering platform. About 35 million more Americans bought groceries online over the past 12 months than in the previous year, according to a survey from Coresight Research. A lot of that growth is coming from Walmart, as the percentage of online grocery shoppers using Walmart jumped from 25.5% last year to 37.4% in this year's survey. That said, most online grocery shoppers still prefer Amazon, which courted 62.5% of shoppers. 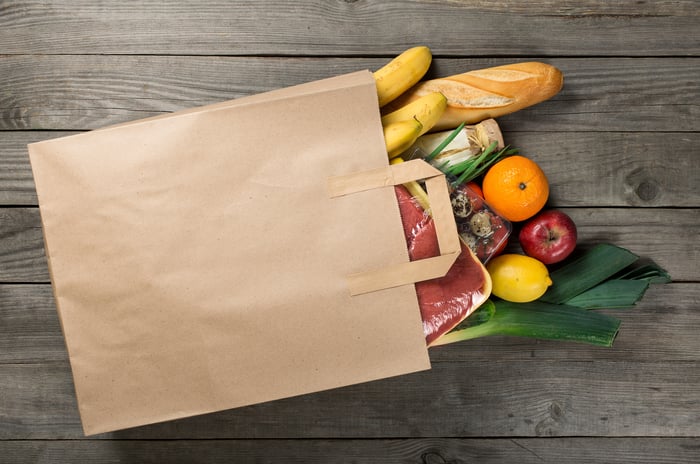 While Amazon still commands a majority of online grocery shoppers, Walmart is winning bigger baskets of groceries on average. "Amazon shoppers typically spend less of their grocery budget online than do shoppers using Walmart.com," Coresight wrote in its brief. Furthermore, only 26% of Amazon shoppers say they do "some," "most," or "all or almost all" of their grocery shopping online. That compares with 35% for Amazon's competitors with larger physical store presences.

Walmart's successfully transferring typical grocery store purchases to its online platform, while Amazon is mostly catering to more occasional grocery purchases or items shoppers wouldn't typically purchase on a regular grocery run. In other words, Walmart is protecting its territory, and Amazon hasn't been making meaningful progress in attracting incremental orders from its grocery business.

Walmart holds a significant advantage, with its 4,700 stores in the U.S. offering easy pickup and delivery centers, and it's used that advantage extremely well so far. But Amazon is still coming for it.

The dichotomy of Prime and non-Prime

The table indicates a couple of things. First of all, most consumers who shop for groceries online are also Amazon Prime members. That's indicated by how much closer the Prime member numbers are to the average across all online grocery shoppers. That makes sense, as Prime members self-select as consumers who do more online shopping in general.

Second, Walmart is doing a better job at courting shoppers who aren't Prime members to its online grocery platform than Amazon. So as more grocery shopping moves online, Walmart is well positioned to win that incremental spend. Of course, online grocery sales come at the cost of its in-store sales to a certain degree.

For Amazon, it puts more pressure on its ability to keep growing Prime memberships, which has become increasingly difficult in the U.S. as total members surpass 100 million. Amazon's always looking for new benefits to offer members so as to grow its subscriber base, and one-day shipping may push a lot more consumers to sign up.

So far, Walmart seems to be beating Amazon in courting consumers who don't subscribe to Prime. As more of those shoppers move to buy their groceries online, Walmart is poised to keep winning market share. Amazon faces a tough challenge in persuading those shoppers to use its Prime subscription and order groceries from its marketplace -- but if it can, it might start winning incremental sales at the expense of Walmart and other brick-and-mortar competitors.