Lockheed Martin (NYSE:LMT) and partner Dynetics have beaten out Raytheon (NYSE:RTN) for a contract to build and test a state-of-the-art U.S. Army laser weapons system. The deal is a small one for now, but it's a clear indication that Lockheed Martin is out in front of rival contractors when it comes to directed-energy weaponry.

The Army has awarded the Lockheed/Dynetics team $130 million to mount a 100-kw laser system on a truck. The High Energy Laser Tactical Vehicle Demonstrator (HEL TVD) contract calls for the team to field a prototype system by 2022 to be tested against incoming drones, mortars, and rockets.

Dynetics, a privately held company, is the prime contractor on the bid, but Lockheed has a prominent role as the provider of the laser weapon subsystem and operator interfaces.

The Army is hopeful to eventually use lasers as interceptors, seeing the technology as ideally suited for high-volume, low-cost threats because of lasers' inexpensive cost per shot and large capacity to refire. Traditional rocket interceptors have proven a poor defense against a proliferation of hostile drones and projectiles because the rockets run out quickly, are expensive to replace, and have a mixed success rate.

"High energy laser weapons have been a system that the United States has wanted to add into their defense portfolio since the invention of the laser," Ronnie Chronister, Dynetics senior vice president of contracts, said in a statement. "We are glad to be selected to build this new and safe weapon system that will provide a simple, yet cost-effective approach in theater." 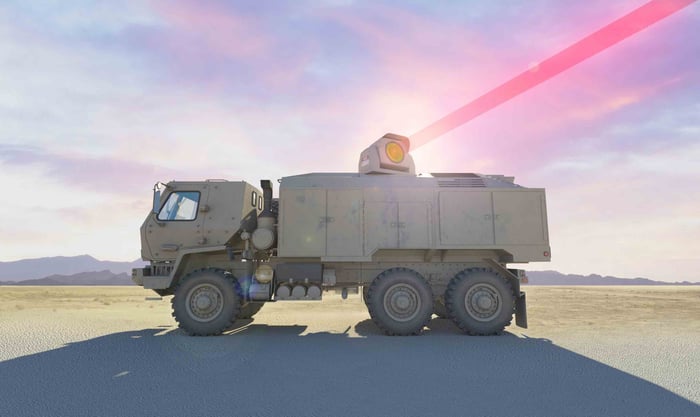 The successful HEL TVD entry will build on Lockheed Martin's more than 40 years of experience working with lasers, which in recent years has produced prototypes including the company's ALADIN 30-kw laser and its ADAM sea-based and airborne system. Powering the design is a hybrid battery/engine unit using a Rolls-Royce M250 helicopter engine.

While the price per unit is yet to be determined, the potential payoff is substantial. The Army's initial plan is to deploy the laser on its vast fleet of medium tactical vehicles, the trucks and trailers that are the backbone of military supply lines. A successful demonstration could also position some variant of the system to defend other vehicles, including the 200,000-plus Army light tactical vehicles currently getting a refresh, or even to defend outposts in dangerous areas.

There are also likely to be years of maintenance and support work with a deployment, as the Army tends to keep its trucks in service for years.

On its own, HEL TVD is a solid win but nothing remarkable for Lockheed, a defense giant with $50 billion in sales. But when it's coupled with some other recent wins, there is a trend emerging that speaks well for Lockheed Martin's future prospects.

In addition to this Army win, Lockheed Martin also in recent years has won competitions to build prototype lasers for the U.S. Navy and Air Force. Lockheed is far from the only company interested in lasers, with Northrop Grumman, for example, working on a separate Navy demonstrator and Raytheon developing a laser small enough for Army Jeeps.

But with these three platform victories, Lockheed Martin's laser business is beginning to resemble Lockheed Martin's hypersonic missile business, which appears to be well out in front of the competition. Given that lasers and hypersonics are two areas in which the Pentagon has pledged to spend substantially to increase its capabilities, the wins position Lockheed Martin to soak up a lot of that additional research spending in the years to come.

Another weapon in the arsenal

Lockheed Martin is one of the best buys among defense contractors not because of its nascent laser business but rather because it is the vendor responsible for billion-dollar platforms including the F-35 Joint Strike Fighter and the THAAD anti-ballistic missile system as well as housing a massive helicopter unit. The company carries a backlog of more than $130 billion in orders and revenue visibility well into the next decade.

But even if lasers and hypersonics are only a small piece of the overall revenue picture for Lockheed Martin today, the businesses still speak well for the company's ability to find new winners as the F-35 and other large programs eventually reach maturity. The Pentagon figures to spend billions to procure laser systems for the Army, Air Force, and Navy in the early 2020s, and thanks to these demonstration wins, Lockheed Martin appears to be a favorite to be involved in most of those contracts.

In years past, the criticism of Lockheed Martin was that it was overly reliant on the F-35. This laser win is a fresh reminder of the diversity of the company's offerings and another reason why buy-and-hold investors can sleep comfortably with Lockheed Martin in their portfolios.