I'm a big fan of the books written by brothers Chip and Dan Heath. Probably my favorite book they have written is Decisive. It focuses on how to make better decisions. There's a point made in Decisive that I think is especially relevant for investors who are considering buying Aurora Cannabis (NASDAQ:ACB) stock.

The Heath brothers use an acronym to help you remember smart steps to take to improve how you make decisions -- WRAP. The "W" stands for widen your options. "R" is for reality-check your assumptions. "A" stands for attain distance before deciding.

But it's what the "P" stands for that I think investors should really note. You should prepare to be wrong...about Aurora Cannabis. 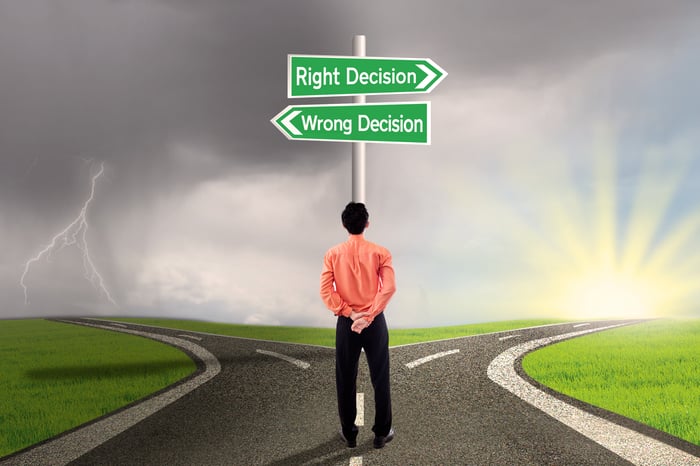 Prepare to be wrong about your optimism

There are plenty of people who are very optimistic about Aurora these days. Cowen's Vivien Azer ranks as one of the top analysts covering the cannabis industry. And she thinks Aurora is the best marijuana stock on the market.

Like many, Azer particularly likes Aurora's tremendous production capacity. The Canadian company has gone all-out in gobbling up smaller marijuana growers to boost its capacity. Aurora has also embarked on a major expansion program internally and recently increased the size of its Aurora Sun facility, which is under construction.

However, most observers expect that supply will exceed demand in Canada within a couple of years. Aurora is placing a significant bet on building capacity for international medical cannabis markets. If those markets don't grow quickly enough, Aurora could be sitting on more capacity than it needs.

Aurora is also making a bet that it's better off remaining independent instead of taking on a major equity partner, as Canopy Growth and Cronos Group have done. But there's a big trade-off that comes with that decision: Aurora won't be able to count on a nice influx of cash from a large partner.

That wouldn't be a problem if Aurora were generating a solid profit. It's not. Although the company expects to generate positive EBITDA this quarter, the reality is that Aurora will still probably have to raise more money -- especially if it keeps up its buying spree of smaller companies.

To raise additional capital, Aurora would most likely issue more senior convertible notes. That's not a bad approach. The downside, though, is that sooner or later those notes could be converted to stock. And that means more dilution is probably on the way for Aurora.

Investors shouldn't dismiss the possibility that Aurora could face a supply glut in a few years. This would almost certainly cause cannabis prices to plunge, dragging down the company's revenue in the process. At the same time, Aurora could have to crank out more shares to support the conversion of its senior convertible notes. There could be a painful double whammy ahead for Aurora investors.

But prepare to be wrong if you're pessimistic, too

Preparing to be wrong goes both ways, though. Despite the recent increase in support for Aurora, there are still plenty of pessimists about the stock. Nearly 9% of Aurora's outstanding shares are sold short right now. But Aurora's naysayers should also prepare to be wrong.

Aurora CEO Terry Booth said in the company's recent quarterly conference call that he loses sleep over being able to supply enough product for the global medical cannabis market. Booth's insomnia could be warranted.

Remember, too, that Aurora's production capacity expansion isn't banking on an immediate opening of the U.S. marijuana market. There's a reasonable chance that federal laws could change in the not-too-distant future so that Aurora can enter the huge U.S. market.

You probably shouldn't overlook the possibility that Aurora's partnering strategy could look brilliant in hindsight a few years from now, either. The company's approach allows it to team up with multiple players across industries that could be disrupted by cannabis. More important, Aurora doesn't plan on giving up a big equity stake. If global cannabis markets really take off, Aurora could very well be the best pure-play marijuana stock on the market in the future.

If you're bullish about the stock, acknowledging that things might not turn out as great as you hope could lead you to hedge your bet on Aurora to some extent. On the other hand, if you're bearish about Aurora, preparing to be wrong could keep you from opening a significant short position with the stock. And maybe preparing to be wrong about Aurora means that you'll do exactly what you planned to do anyway.

No matter what your view about Aurora is and no matter what happens, realizing that you just might be wrong in your thinking is the right call to make.