Please ensure Javascript is enabled for purposes of website accessibility
Log In Help Join The Motley Fool
Free Article Join Over 1 Million Premium Members And Get More In-Depth Stock Guidance and Research
By Leo Sun – May 28, 2019 at 12:00PM

The streaming giant only accounts for 2% of all downstream mobile traffic.

Netflix (NFLX -2.04%) has nearly 150 million paid subscribers, making it one of the top video-streaming platforms in the world. However, the company recently revealed that its videos only accounted for an estimated 2.4% of all downstream mobile internet traffic worldwide, giving it a much smaller slice of the mobile market than YouTube, Facebook, Instagram, and Snapchat. 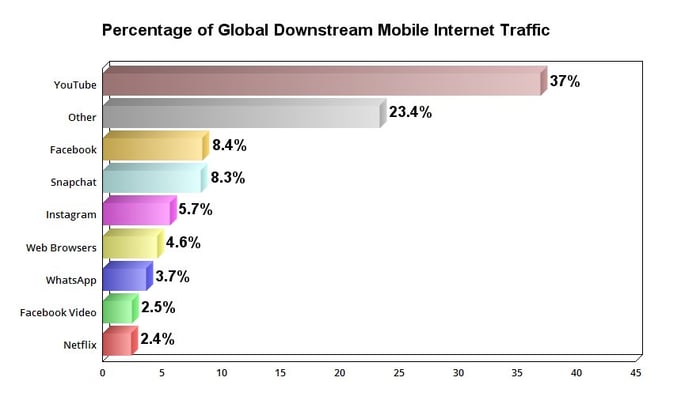 Data source: Sandvine, "The Mobile Internet Phenomena Report" (February 2019). Netflix notes that "The Sandvine data does not include significant data from either China or India." Chart by author.

People prefer watching shorter videos on phones instead of Netflix's full-length shows or movies. The streaming pioneer started letting viewers download content to their phones and tablets in 2016 to address data constraints, but it's unclear if that effort moved the needle.

Yet Netflix still dominates traditional TVs, where 70% of its viewers watched its content last year. Earlier this year, the company claimed that it accounted for 10% of all time spent in front of TVs in the U.S.

Netflix has a solid core market, but it could still be vulnerable to video platforms like Facebook Watch and Snap Originals, which are launching original content for mobile viewers. Netflix will also face competition from Apple TV+ and Disney+ soon, and those formidable rivals could target Netflix's weak mobile presence to gain more viewers.