It may seem like an odd time to stand out, but AT&T (NYSE:T) is finally beating the market. The Dow has moved lower for five consecutive weeks, but the telco giant has bucked the trend by inching higher along the way.

AT&T has been rising even as it posted an initially disappointing quarterly report. It also can't help that HBO's Game of Thrones -- now under its watch -- closed out with record ratings but with mixed viewer reviews that will hurt the franchise's long-term replay value. Even on the silver screen where AT&T's freshly acquired WarnerMedia has scored some springtime hits in Shazam! and Pokemon Detective Pikachu, none of them currently ranks as this year's four biggest multiplex winners.

There are many moving parts at AT&T, and with some of them flat to moving marginally higher with the rest in a state of decline, it seems as if the stock would be a hard sell. However, tack on its long-term resilience to its chunky yield and it makes perfect sense that investors would be flocking to Ma Bell as a defensive play at a time when the market in general is disconnecting with mainstream investors. 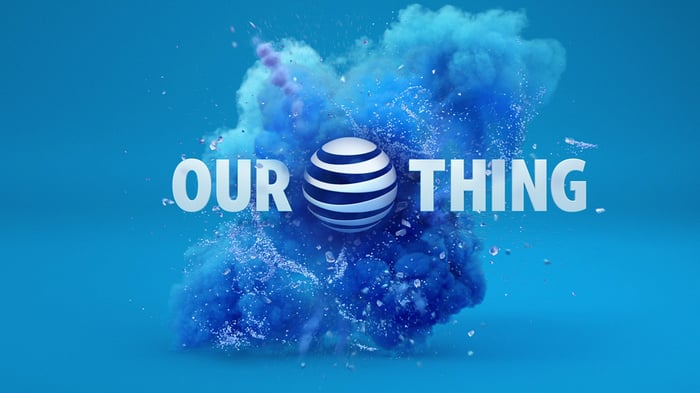 There is a lot to like about AT&T's decision to break the mold. It realized a long time ago that landlines and traditional telecommunication services were dying businesses. It threw its weight behind wireless, and now runs neck and neck with Verizon for market dominance in the only growing phone-based business in its arsenal. It wasn't afraid to strike big deals.

The purchase of satellite television DirecTV may seem like a bad deal in retrospect, but AT&T has learned from the cord-cutting revolution by making its next big acquisition a game changer. Gobbling up WarnerMedia is a "content is king" move that finds it at the forefront of magnetic intellectual properties. Between the revival at DC Comics and the hit factories that HBO, Turner, and Warner Bros. have been over time, AT&T now has a strong play for access as well as what consumers want to access.

AT&T is not some sleepy wireline business, and even if organic growth seems like a slow-moving tug-of-war between slow-growth and gradually declining businesses, this should still be a recipe for investor success -- particularly at current levels. The stock is trading at just nine times this year's earnings, and despite the heavy leverage, this is still a cash-generating gold mine. Earlier this month AT&T confirmed that it's still on track to clock in with about $26 billion in free cash flow this year, and that makes its beefy dividend that much more sustainable.

AT&T's current yield of 6.3% is real, and it's growing. The company has increased its dividend for 35 consecutive years, and with a payout ratio of 0.58, there is plenty of wiggle room to keep the hikes coming. AT&T stock has been rising with the market tanking in recent weeks, but the good times should continue even when the buyers come back.