The wireless giant is selling off assets to rein in its monstrous debt.

There was plenty of good news in AT&T's (T -2.22%) first-quarter report. The company added wireless subscribers, grew profits in its entertainment group, saw revenue growth from WarnerMedia, and made progress paying down its debt.

But there was some bad news as well. Premium TV subscribers are walking out the door, with AT&T losing more than half a million subscribers during the quarter. And DirecTV Now lost nearly 100,000 subscribers following price hikes for the live TV streaming service.

AT&T's total revenue was driven higher by the Time Warner acquisition. That business also contributed to the company's earnings growth during the quarter.

WarnerMedia, which comes from AT&T's acquisition of Time Warner last June, was responsible for $7.5 billion of revenue, net of eliminations. AT&T's total revenue would have declined without WarnerMedia's contribution.

Revenue in the communications segment declined by 0.4% year over year, with revenue growth in mobility more than offset by declines in entertainment and business wireline. Within the mobility group, AT&T added 179,000 postpaid smartphone subscribers in the U.S., along with 96,000 prepaid net adds.

While revenue in the entertainment group declined slightly, profitability improved. Entertainment EBITDA jumped 6.9% year over year, a reflection of AT&T's efforts to focus on profits. DirecTV Now is losing subscribers, but the service carries far higher prices today than it did a few years ago.

WarnerMedia, which contains Turner, HBO, and Warner Bros., enjoyed revenue and operating income growth in the first quarter. On a pro forma basis, revenue was up 3.3% year over year, and operating income was up 11.6%. Turner subscription revenue increased, and HBO registered digital subscriber growth thanks to the popularity of Game of Thrones. 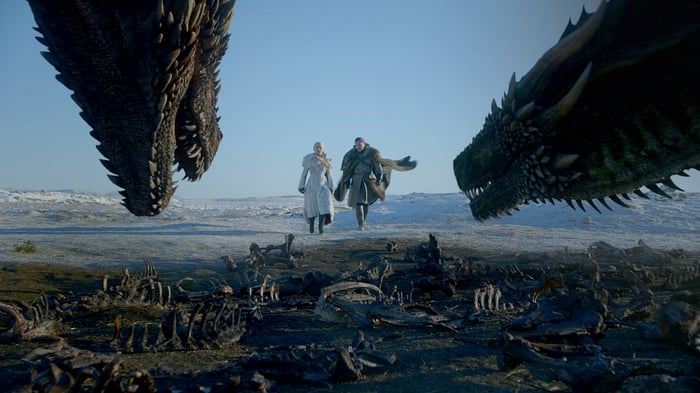 After acquiring DirecTV and Time Warner, AT&T is now focused on reducing its debt load. The company made progress on that front during the first quarter, knocking down its net debt by $2.3 billion. Since the Time Warner deal closed, AT&T has reduced its net debt from $180 billion to $169 billion. It plans to bring that number down to roughly $150 billion by the end of 2019.

AT&T has already announced a few major asset sales. The company recently sold its stake in Hulu back to the video streaming company for $1.43 billion, and it announced an agreement to sell its space at 30 Hudson Yards for $2.2 billion and lease back the space for the next 15 years. AT&T expects to generate an additional $3 billion to $5 billion from further asset sales and working capital initiatives this year.

AT&T is planning to launch multiple new video streaming services this year, leveraging the assets it acquired in the Time Warner deal. The company will be competing not only with Netflix, which has been burning billions of dollars annually to build out its content library, but also Disney's and Apple's new streaming services.

AT&T has assembled a world-class collection of content, but it's also made some big changes that could prove costly in the long run. Richard Plepler, the former head of HBO credited with the premium network's recent success, resigned earlier this year. AT&T plans to ramp up how much content HBO produces, but that could put HBO's reputation for quality at risk.

There's still a lot of uncertainty around AT&T's transition to a media company. The stock is down nearly 30% from its multiyear peak, reflecting some uneasiness on the part of investors. AT&T has the potential to turn its media business into an even bigger cash cow, but it also has the potential to fail miserably. If this push into media doesn't work out well, the company's massive debt load will haunt it for years.