Please ensure Javascript is enabled for purposes of website accessibility
Log In Help Join The Motley Fool
Free Article
Join Nearly 1 Million Premium Members And Get More In-Depth Stock Guidance and Research
By Lee Samaha – Updated May 28, 2019 at 8:29AM

There's a big opportunity ahead for this growth stock.

Shares in flight-simulator and pilot-training company CAE Inc. (CAE 0.83%) are up more than 40% year to date at this writing. The Canadian company's move has probably been driven by a combination of strong ongoing earnings, a buoyant civil aviation market, and market recognition of the company's long-term and near-term growth potential.

Let's take a look at why this aviation safety specialist has done so well, and at whether its growth can continue. 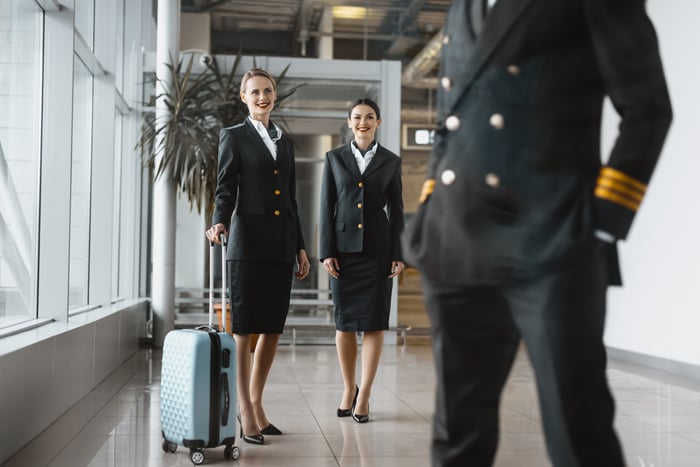 There's huge demand for new pilots in the coming decade, and CAE is well-placed to benefit. Image source: Getty Images.

CAE styles itself a world leader in simulation and training for civil aviation, defense, and training, and as such it's seen as a play on the need to train new pilots in order to serve growth in civil aviation. It's a great market to be in. As you can see below, airline profitability has dramatically improved since the last recession -- good news for companies servicing the industry: 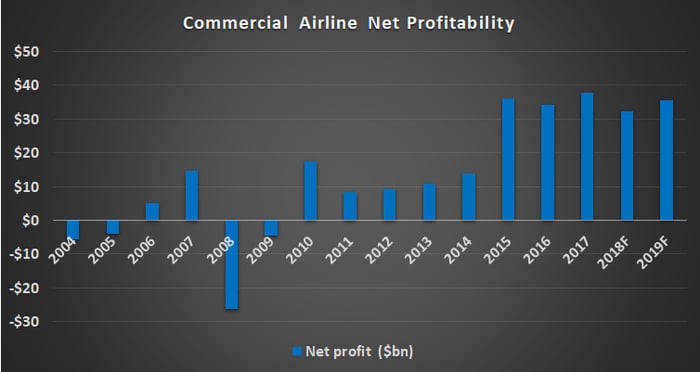 Data source: The International Air Transport Association. Chart by author. Figures are in billions of dollars.

There's also a specific need to train new pilots. For example, due to a combination of an aging pilot population and demand for new pilots in line with growth in passenger traffic, CAE estimates that the current population of 360,000 pilots (305,000 airline pilots and 55,000 business-jet pilots) will expand to 530,000 in the next decade; given attrition of 150,000 pilots, that target will require 320,000 new pilots. If you think this is a large number, then recall that a typical narrow-body aircraft requires 6 or 7 pilots per plane and a wide-body requires around 8.

Moreover, 215,000 new captains will be needed in the next decade, according to CAE. Whichever way you look at it, the long-term end-market demand outlook is very positive -- and CAE's management expects the company's civil aviation segment to grow operating income in the upper 20% range in 2020.

In addition, CAE has an opportunity to capitalize on its position as the leading provider of simulators by grabbing market share in services; management estimates that it only has a third of the global market for training services, so there's ample runway for growth.

It's far too early to draw any conclusions from the results of investigations into the recent high-profile Boeing (BA 1.46%) 737 MAX crashes, but the tragic events have encouraged a renewed focus on every aspect of airline safety.

In a sense, it doesn't matter what the final conclusions are; as Boeing's CEO Denis Muilenburg argues, "The history of our industry shows most accidents are caused by a chain of events." Given that pilot action is one of the links in the chain, there's obviously a heightened focus on ensuring pilots are well-trained after any major tragedy occurs.

The subject came up on the recent fourth-quarter earnings call; CAE's CEO Marc Parent respectfully declined to comment on the specific situation, but affirmed that "we've got capability, we've got capacity to support whatever transpires to get the airplanes back into the air, to support them, support the airline customers, OEMs [original equipment manufacturers], regulators, to ensure that training needs are met."

He later confirmed that current 737 simulators could be converted into 737 MAX simulators, and said CAE "could ramp up to meet any demand, any of the work" coming in, order to handle training required to get the 737 MAX back into service.

On a speculative note, the company's position as a pure-play training company means it's a good candidate for a larger company entering the market; it's no secret that, for example, Boeing is looking for ways to expand its services offerings.

However, CAE doesn't need takeover speculation to make it worth buying. Based on its valuation alone, it looks like an attractive growth stock. The company had a strong fiscal 2019, with annual revenue up 17% and adjusted earnings per share up 13%. Analysts expect CAE to grow revenue 13% in fiscal 2020, with EPS growing 21% to 1.46 Canadian dollars (around $1.09), putting it at a forward price-to-earnings ratio of 23.

That valuation doesn't seem too expensive for a company with such strong long-term earnings prospects. The stock deserves consideration by growth-oriented investors.

Buy the Dip: 3 Stocks To Buy Today and Hold for the Next 3 Years