As more businesses bring their sales online and consumers opt for digital stores over physical ones, worldwide e-commerce sales are poised to grow from $2.8 trillion last year to $4.9 trillion in 2021. And as e-commerce expands, it's creating huge investment opportunities.

To help you pick a few of the best stocks in the e-commerce space, we asked three Motley Fool contributors for their top picks to buy now. Here's why eBay (NASDAQ:EBAY), JD.com (NASDAQ:JD), and Amazon (NASDAQ:AMZN) topped their lists. 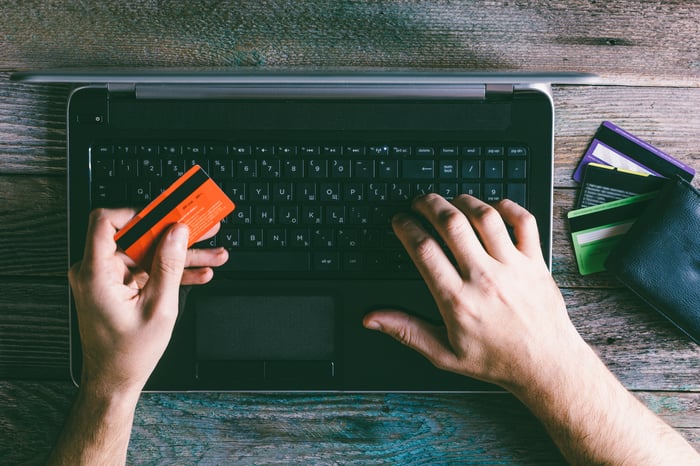 Steve Symington (eBay): With as much attention as companies like Amazon.com command from investors, it's easy to forget about all the other companies making waves in the e-commerce space. But shares of the original online marketplace soared following its strong first-quarter 2019 results last month.

That's not to say eBay's headline numbers looked amazing at first glance. Quarterly revenue rose a modest 2.4%, to $2.643 billion, while adjusted earnings climbed a much more impressive 10.9%, to $608 million. Thanks to ambitious stock repurchases over the past year, including 42 million shares bought back for $1.5 billion in the first quarter alone, adjusted earnings per share soared 26%, to $0.67.

But arguably most exciting are eBay's investments in next-gen payment and advertising solutions. Under a multiyear initiative that began early last year, eBay intermediated $220 million of gross merchandise volume in the first quarter alone on its marketplace platform -- up 61% from the previous quarter. It also saw more than 800,000 active sellers promote over 200 million listings in the first three months of 2019, with each delivering an average visibility boost of 36% and collectively generating incremental revenue of $65 million.

As these initiatives continue to gain scale, so too will the leverage eBay enjoys in bolstering its top and bottom lines. Combined with a recently initiated dividend that yields around 1.6% at today's prices, it's only a matter of time before the rest of the market catches on to what a bargain eBay stock represents right now.

This Chinese e-commerce titan really shouldn't be this cheap

Anders Bylund (JD.com): Chinese e-commerce giant JD.com is in dire straits these days -- at least if you measure the company's health by stock performance. Share prices slid 28% lower over the last 52 weeks, and JD's stock is trading 42% below their yearly highs. Investors can pick up the stock at the affordable valuation of 9.6 times free cash flows.

Meanwhile, JD has absolutely crushed Wall Street's earnings expectations in the last two quarterly reports. Top-line sales are growing at an average annual pace of 37% over the last three years. The company is not only profitable, but also an effective cash machine. In fiscal year 2018, JD converted 4% of its incoming revenues into free cash flows.

The stock is cheap, but not because JD's business is floundering. Instead, investors are punishing this ticker while Washington and Beijing flex their macroeconomic muscles in a tariff-laden trade war. Moreover, CEO and founder Richard Liu was accused of sexual misconduct last fall and now faces a civil lawsuit filed by the alleged victim.

The trade war is no joke, and neither is the CEO scandal. However, Chinese-American relations surely must normalize at some point and JD will still be a massive online shopping hub at that time, ready to bounce back from the weak consumer spending this dispute has triggered in China. And while Richard Liu was instrumental to setting JD on the course it's navigating today, his hand-picked lieutenants should be able to support the business if the founder is forced to step away from the CEO office for legal reasons. JD can't quite be run by a ham sandwich, but the C-suite's bench team comes with excellent qualifications and years of experience with running exactly this operation.

Therefore, JD's sell-off looks way overdone, and the low prices shouldn't last much longer. The end of the trade wars will send share prices skyrocketing. The end of Richard Liu's legal issues -- by settlement, dismissal, or any kind of verdict -- will also remove a dark cloud hanging over this management team. And of course, JD will probably keep beating Wall Street's expectations while waiting for these other trigger events to arrive.

JD.com is a steal, it's a deal, and it's a no-brainer buy at these prices.

Why shop around when you can pick the U.S. leader

Chris Neiger (Amazon): When it comes to e-commerce in the U.S., nobody tops Amazon: An estimated 47% of all online sales in the U.S. will happen on Amazon's platform this year. Not only is Amazon taking up nearly half of online sales, but the next four biggest U.S online retailers combined only take 16% of the market.

While Amazon makes its operating profit from its cloud-computing division, called Amazon Web Services, its e-commerce segment dominates sales. In the most recent quarter, the company's combined U.S. and international e-commerce sales increased 14% year over year and accounted for 87% of total revenue.

Some investors have been concerned that Amazon's revenue growth has slowed down for the past four quarters, but there's likely little to worry about over the long term. Amazon has built out its e-commerce dominance with fast, free shipping for its Prime members, who tend to spend more on the company's website. Add to all of that the company's cloud-computing dominance and recent advertising-sales growth, and this e-commerce stock is looking better all the time.