Please ensure Javascript is enabled for purposes of website accessibility
Log In Help Join The Motley Fool
Free Article Join Over 1 Million Premium Members And Get More In-Depth Stock Guidance and Research
By Rick Munarriz - May 29, 2019 at 3:00PM

The data storage specialist is nearly back to last year's IPO price. The stock has gone nowhere, but the year ahead looks more promising.

Investors that got in on the once red-hot Dropbox (DBX -2.41%) IPO last year probably feel as if they've taken a 14-month roundtrip to nowhere. The provider of cloud-based storage solutions initially soared after going public at $21. Three months later, the shares had more than doubled, peaking last June at $43.50. The good times didn't last.

By November, the stock had buckled below its IPO price, and while it has staged a modest bounce in recent months, it's barely above its original $21 price tag these days. We'll get into the quick rise and spectacular fall shortly, but today investors can get in at nearly the price that well-heeled institutional investors paid for their pre-IPO positions in the springtime of last year. Since Dropbox soared 36% the day it hit the market in March of last year, opportunistic investors can get in for even less than first-day retail buyers of the shares. Dropbox has had more than a year of growth, seasoning, and proving itself to investors, yet you and I have a chance to get in at almost last year's IPO price. Is it too good to be true? Let's size up the opportunity. 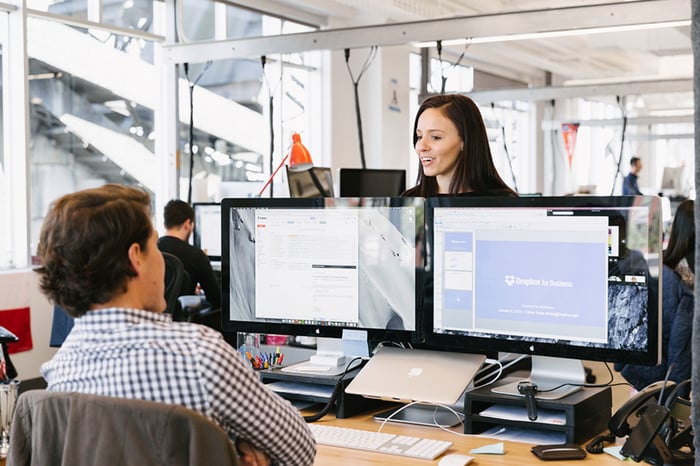 The steady ascent and subsequent plummet at Dropbox may lead one to believe that this a minefield of lumpy financial updates with swings of quarterly hits and misses, but things have been surprisingly robust on that front. Dropbox has topped Wall Street profit targets in its first four full quarters as a public company -- and it isn't even close.

Dropbox has topped analyst earnings estimates by a double-digit percentage margin every single time over the past year. If you're looking for a knock, one can argue that revenue growth has decelerated for seven consecutive quarters, but even on that gradual slowdown path, we've seen Dropbox typically boost its top-line guidance as the year plays out.

The fast-growing data storage specialist's latest quarter is a good example of Dropbox excelling. We already know about the bottom-line beat, but when revenue rose 22% to hit $385.6 million, it exceeded the $381.6 million that Wall Street was modeling. Dropbox would go on to marginally raise the high end of its full-year guidance.

There are now 13.2 million paying users on Dropbox, up from 11.5 million a year earlier. Average revenue per user in that time has grown from $114.30 to $121.04. Stack growing revenue per user on top of a growing premium audience base and you have the recipe for a solid growth stock.

Data storage is a commoditized niche with cutthroat players, and that's not ideal. However, Dropbox turned free-cash-flow positive in 2016, and it's remained squarely profitable on an adjusted basis ever since. The stock may not seem cheap at more than 50 times this year's adjusted earnings and nearly 40 times next year's forecast, but it has to feel better to get into Dropbox now than paying almost twice as much a year ago.

Dropbox is a buy here. Don't let the investors at the arrival gate groaning about how uneventful it's been on their 14-month flight. Your flight starts now, and the runway is there for the taking.