Please ensure Javascript is enabled for purposes of website accessibility
Log In Help Join The Motley Fool
Free Article Join Over 1 Million Premium Members And Get More In-Depth Stock Guidance and Research
By Billy Duberstein - Updated May 30, 2019 at 3:39PM

After the housing bubble burst, Blackstone made a big bet on home rentals. Now, it's cashing out.

Blackstone (BX) is having quite a momentous beginning to 2019. Not only is the company changing its corporate structure from a partnership to a C-corp in July, but the private equity giant is also in the process of cashing in one of its biggest bets ever.

In the wake of the great recession, Blackstone teamed up with local real estate investors to buy up foreclosed homes, fix them up, and rent them to families. All in all, Blackstone spent a whopping $10 billion, starting around 2012, buying homes in top job markets and buying out private real estate investors, then merging the assets under one company called Invitation Homes (INVH 2.94%). Blackstone took the new company public in January 2017, then merged with rival Starwood Waypoint Homes in November of that year.

The bet was a good one, as millennials and seniors alike, hard-pressed to make large down payments and perhaps reluctant to make a long-term commitment to a home, have proved to be relatively reliable tenants.

Now, Blackstone is cashing in that bet. So, how'd it do? 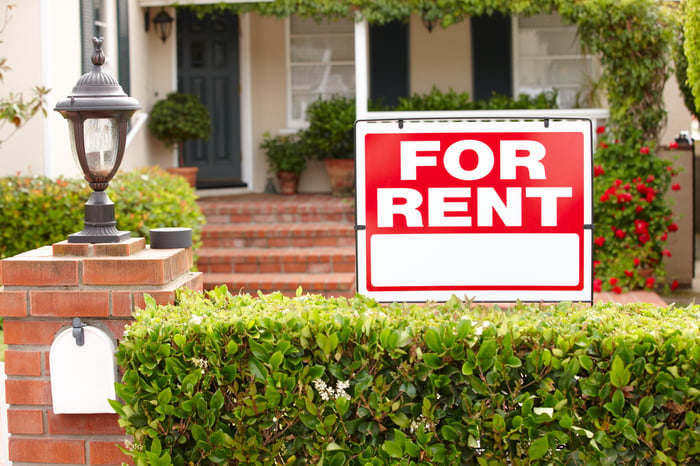 Aside from the $2 billion in share sales, Blackstone has also collected some $880 million in dividends and payouts, both pre- and post-IPO. After the share sales, Blackstone will still own about 27% of Invitation Homes, which is currently valued at $13.4 billion, so Blackstone's stake is worth roughly another $3.6 billion. The stock also pays out a dividend with a yield just north of 2.1%.

You might think that this is not such a great return on Blackstone's investment, but remember that private equity firms use lots of debt when making purchases in order to juice their equity returns. Blackstone reportedly only invested about $2 billion of equity (in other words, roughly the standard 20% down payment on a house), so the company and its partners' cost base is only $2 billion, not $10 billion. If that is in fact the case, Blackstone and its partners gained roughly 225%, based on the current value of the remaining Invitation Homes shares.

That's not too shabby for a seven-year investment, equating to about an 18.3% compound average annual return.

Are we at peak rental?

Blackstone may have chosen a savvy time to begin exiting its investment. Due to the overhang of the global trade war, investors have flocked toward "safe-haven" stocks like Invitation Homes, which has handily beaten the S&P 500 this year. 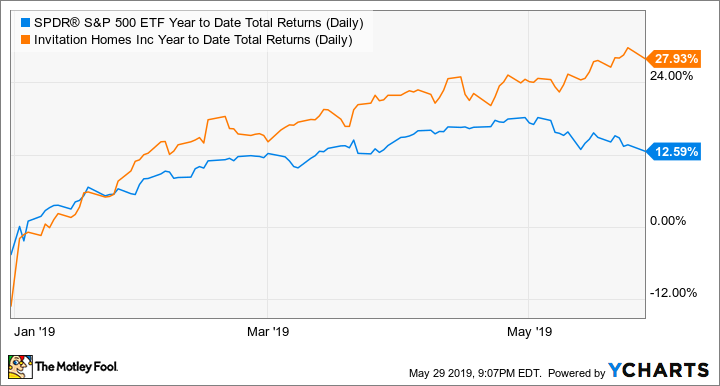 Meanwhile, new single-family home sales are now back to the levels of the mid-1990s, before an epic surge that led to the housing crash of 2008 and the Great Recession. Blackstone may feel that homeownership could be making a comeback, or is at least getting back to a healthy equilibrium, making an exit (or partial exit) a prudent idea. Of course, Blackstone also needs to monetize its private equity and real estate investments after a number of years to meet investor requirements, so the share sales could also be attributed to that as well.

Still, with two sales in the span of two months, it seems pretty clear Blackstone is looking to get out in a hurry at current prices.

Yet even after the announced sales, Invitation Homes' stock hasn't gone down much, reflecting the continued faith in the American renter and the 17 markets in which Invitation Homes operates -- mostly the western U.S and Florida.

Invitation Homes currently trades at about 22.3 times funds from operations (FFO). That's not terribly cheap, though it is right in line with many "recession-proof" consumer staples companies with "defensive" revenue streams. In an uncertain world, people always have to live somewhere, and it looks like the market is eager to buy these assets from Blackstone at fair (or even better) prices.