Comcast (NASDAQ:CMCSA) is a conundrum for investors.

On the one hand, Comcast regularly ranks among America's most hated companies -- mainly because it combines two things Americans hate: It's a cable company, and it's a near-monopoly business in the areas where it operates, such that consumers have no choice but to use it even if they hate it. Indicative of this displeasure, last year some 371,000 Comcast customers attempted to cut the cord by canceling their cable packages.

And yet, in so doing, many of these customers discovered: Even if you ditch your cable TV package, if you want to stream video over the internet, you still have to pay an internet service provider for that privilege -- and if Comcast is your internet provider, that means you haven't really cut the cord at all.

One analyst thinks this is a great reason to own Comcast stock today. 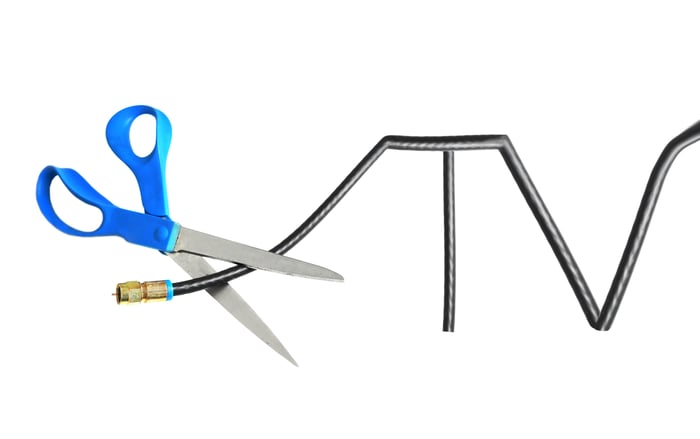 Try to "cut the cord." Just try it -- Comcast dares you

Despite all the worries about cord-cutting in America to date, investment bank Guggenheim Capital argues that Comcast has actually made a "fairly smooth" transition from being primarily a provider of paid TV services to a provider focusing simply on "connectivity" -- which you can think of as selling internet access, regardless of what kind of information traffic flows through that access. And as Guggenheim explains in a note covered on TheFly.com today, Comcast is likely to continue winning market share in broadband connectivity going forward.

The numbers bear this out.

And Guggenheim notes that this "pivot" from cable TV to a broadband internet focus has been good news for Comcast's bottom line.

Guggenheim notes further that Comcast is "showing steady gains" in its nascent wireless phone business, while the company's NBCUniversal properties operate at "a very high level." Indeed, S&P Global Market Intelligence data shows that sales in Comcast's several NBCUniversal businesses climbed a heady 9% in 2018 -- even better than the near-4% growth in revenue from "cable communications."

All of which leads Guggenheim to upgrade Comcast stock to buy with a $52 price target.

And I admit that, at first glance at least, Comcast stock does look pretty good. On top of the attractive growth in revenue and earnings, shares appear objectively cheap at a valuation of just 15.6 times trailing earnings and just 12.3 times free cash flow. That being said, there are still a couple things that give me pause about recommending Comcast.

The first is debt -- and Comcast has a lot of it, more than $110 billion net of cash on hand. If you factor the company's net debt into the picture, the valuation of this stock shifts dramatically higher, to an enterprise value of more than 19 times free cash flow and nearly 25 times reported earnings. Even with most analysts polled by S&P Global forecasting better-than-10% annual earnings growth for Comcast over the next five years, these valuations look a little steep to me.

And the second thing...is also debt! But for a different reason: Even if Comcast were to take all the free cash flow it generates in a year and plow it into debt repayment, it would take the company more than seven years to pay off all its debt. But I'm not 100% certain Comcast even has seven years in which to deal with its problem.

SpaceX and its Starlink system of internet satellites is one of them, but Amazon.com and OneWeb also have similar plans. Combined, these three firms could put thousands of broadband internet satellites in orbit over the next several years, introducing competition to a "connectivity" market where Comcast has not had to contend with serious competition for some time. If satellite broadband internet turns into a serious rival for customers, it could short-circuit Comcast's "pivot" to connectivity as a business model, and begin to crimp profits in just a few years, at which point the company's mammoth debt load could turn into a bigger problem than investors see it as today.

So caveat, dear investor -- and keep an eye on the skies.