Salesforce.com (NYSE:CRM), the leader in customer relationship management software, is no stranger to controversy. But its latest move may have just raised the stakes. With no fanfare, Salesforce updated its Acceptable Use Policy in April, and now bars its customers from selling certain types of firearms using the e-commerce tools on its platform.

The revised document includes the following passage under the Prohibited Actions subhead: "Worldwide, customers may not use a service to transact online sales of any of the following firearms and/or related accessories to private citizens." It went on to list a number of military assault-style weapons, as well as "magazines capable of accepting more than 10 rounds." This policy bars customers that sell items on the list from using its e-commerce platform to process the transactions.

This policy change is sure to please some people and infuriate others, and that's not even counting the customers affected. 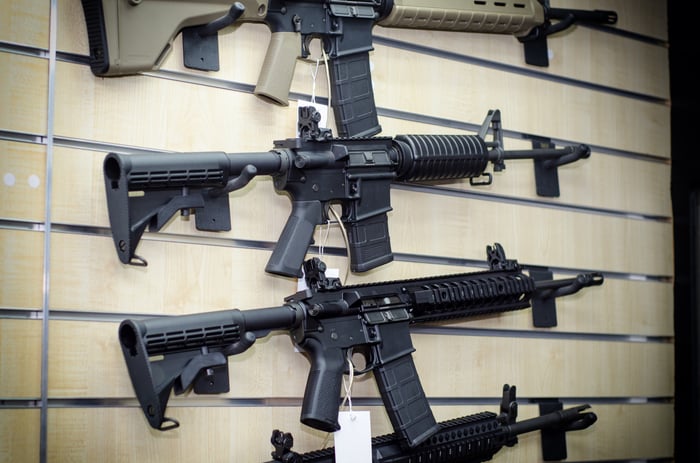 Salesforce was immediately accused of forcing its views on others and discriminating against gun owners. It's important to note, however, that Salesforce isn't the only company to choose sides in the ongoing national conversation about gun sales. In 2015, retail giant Walmart (NYSE:WMT) -- the biggest seller of guns and ammunition in the country -- announced it would no longer sell military assault-style rifles in its stores. This included the AR-15, the most popular rifle in America. The company also banned high-capacity magazines and bump stocks.

In early 2018, both Dick's Sporting Goods (NYSE:DKS) and Walmart went even further. Dick's said it would ban sales of assault rifles at all stores, including its 35 Field and Stream locations. Both Walmart and Dick's also raised the minimum age for gun purchases to 21 years old. This year, Dick's announced it would stop selling guns and ammunition from 125 of its 720 locations. Sales at Dick's initially slumped following the decision, but the company returned to growth shortly thereafter.

Other online sales platforms have made similar moves. eBay and Amazon.com -- the world's largest e-commerce company -- already have policies that prohibit the sale of firearms on their sites.

Salesforce has a history of activism

This isn't the first time Salesforce and its outspoken CEO, Marc Benioff, have used the company's success to bring attention to -- and take a stand on -- a highly charged political and/or social issue.

Indiana passed a law in 2015 that allowed businesses or individuals to cite religious beliefs in refusing services to same-sex couples, which some called state-sponsored discrimination. Salesforce, which has a major presence in the state, canceled programs, and Benioff threatened to pull all Salesforce employees out of Indiana. The outcry from a wide variety of companies doing business in the state -- including Salesforce -- forced changes to the legislation.

At Benioff's direction, Salesforce has been working to close the gender pay gap, one employee at a time, and ensure that women are promoted on equal footing with their male counterparts. The executive has also called for greater regulation of social media, citing consequences similar to alcohol and tobacco addiction.

Benioff has made his views on guns clear before. Just in February, he tweeted support for banning the AR-15 rifle following the deadly shooting at a high school in Parkland, Florida, last year.

Some investors feel that these companies are overstepping their bounds by publicly stating their views on controversial political issues like guns, and should just focus on their businesses. Others applaud the decisions, citing the influence of big companies on orchestrating change.

Salesforce sought to downplay the move in a statement: "After carefully reviewing similar policies in the industry and discussing with internal and external stakeholders, we updated our policy. The change affects new customers and a small number of existing customers when their current contracts expire."