Shares of Mattel Inc (NASDAQ:MAT) are down 5.9% at 1:50 p.m. on May 31, in very heavy trading. So far today, more than 10 million shares have traded hands, nearly double the average number over a full session in recent months, and there's still almost two hours of trading left.

There isn't anything material that's been reported about Mattel today -- no press releases or Friday-afternoon SEC 8-K filings with bad news buried deep inside them. However, a lot of stocks are joining Mattel in the sell-off, with the S&P 500 and Dow Jones Industrials both down today. 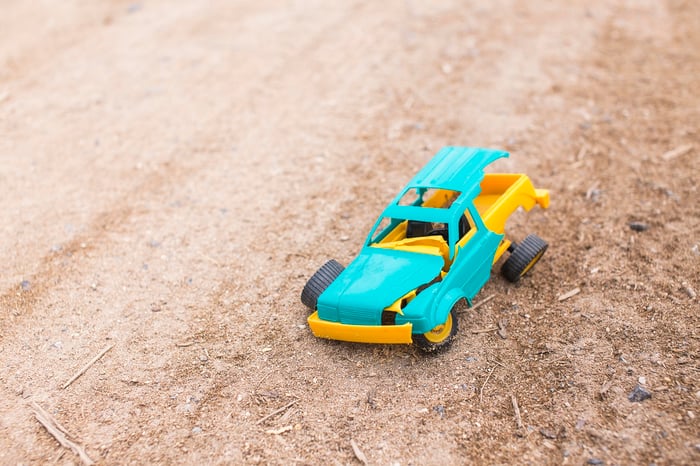 The biggest reason is likely the White House. President Trump is now threatening to unilaterally impose tariffs on Mexico, starting at 5% and potentially increasing to 25% in October.

This threat is weighing on investors today, clearly; not only are stocks including Mattel down big in heavy trading, but bond yields -- particularly the 10-year U.S. Treasury, which hit a 20-month low today -- are down sharply as investors move capital to the perceived safety of bonds.

What makes these particular tariffs concerning for many is that they aren't targeted at addressing trade imbalances. To the contrary, unlike the ongoing trade war with China, which is heavily focused on the U.S./China trade imbalance, as well as China's history of anti-free-market behavior including intellectual property theft, Trump is using trade actions as a weapon to halt immigration from Mexico.

In short, the market is reacting to fears that the administration's heavy-handed use of tariffs could start having a negative impact on the U.S. economy soon. Mattel relies heavily on steady consumption from U.S. shoppers, and using a trade action to address immigration would almost certainly cause short-term pain without offering any long-term benefits to trade.

Moreover, there are legitimate worries that these tariffs could further harm U.S.-Mexico trade relations over the long term, sending the latter a signal that its best interests are to establish stronger trade ties with countries other than the U.S.

For Mattel, frankly, this is a lot of smoke and very little fire, at least over the long term. Sure, a prolonged period of economic uncertainty isn't good for its business, and the ongoing fight with China will affect its results since so many of its products are sourced from there, and China is a strong consumer growth market.

However, for investors who are bullish on Mattel's long-term prospects, today's sell-off could be a buying opportunity. I'm not quite there yet, but it's worth putting the company on a watchlist to follow for now.