The industrial giant's performance is in need of improvement, and it could do a lot worse than taking a look at its smaller peer.

There's only one winner in the battle between the largest two truly multi-industry stocks in the S&P 500. Over the last three years, Illinois Tool Works' (ITW -1.52%) stock has risen nearly 40% while 3M's (MMM -2.33%) has declined by 2%. The disparity in performance is somewhat surprising as the companies have some end markets in common. However, upon closer inspection, it's clear that 3M could learn a lot from its peer's operational execution. Here's the why and how.

The first thing to note is that the two have different business philosophies, and this can easily be seen in their operating metrics (which we'll get to). 3M has long been a company that emphasizes research and development (R&D) and capital spending in order to develop differentiated products that command pricing power and therefore a relatively high gross margin. 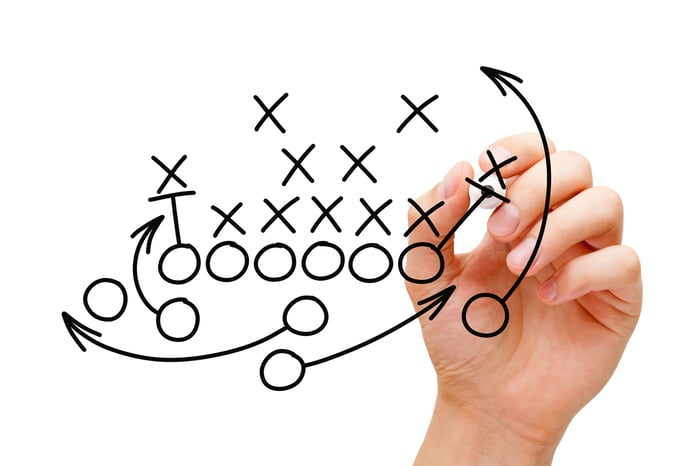 Unfortunately, 3M hasn't been able to demonstrate that it can generate margin expansion through pricing in recent years, and it's largely relied on volume increases instead.

On the other hand, Illinois Tool Works spends significantly less on R&D and capital expenditures, or capex, as a share of revenue. Instead, the company focuses on refining existing technology into products for customers.

You can see the difference in emphasis in the chart below; 3M is consistently spending more of its revenue on R&D and capex than Illinois Tool Works is. 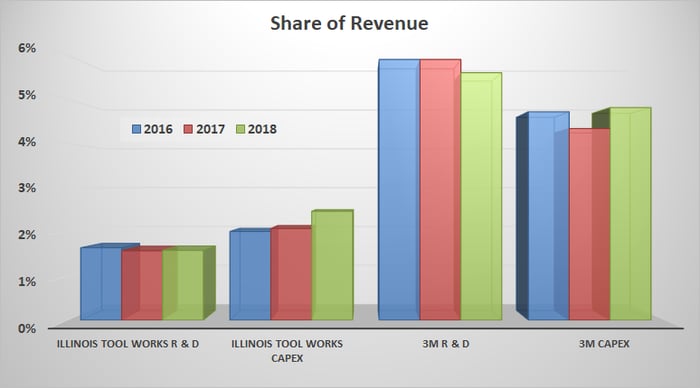 This is not to criticize 3M's business model, per se. After all, there's absolutely nothing wrong with investing in order to generate growth, and you could equally criticize a company for not investing enough. The difference, however, is that Illinois Tool Works has been executing in line with its business model, while 3M has not.

The following chart reveals how, as you might expect, 3M has a higher gross margin than Illinois Tool Works as its differentiated products tend to have a higher margin. When it comes to operating margin, though, Illinois Tool Works is now ahead. Similarly, 3M's rival is now generating more free cash flow from its revenue. 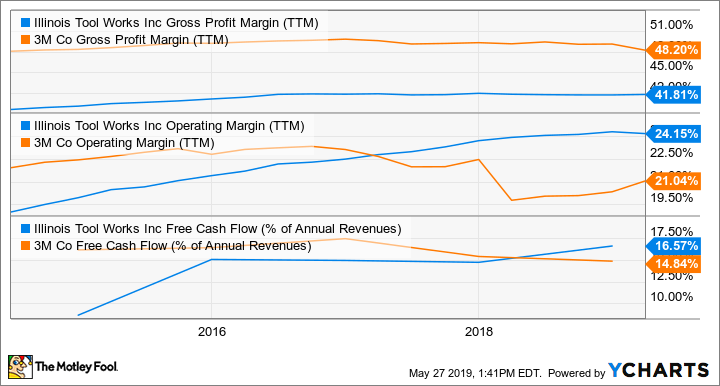 The reason for Illinois Tool Works' outperformance comes down to the successful execution of its enterprise strategy. In a nutshell, since 2013, the company has been engaged in pruning the less profitable parts of its product portfolio and refocusing on the 20% of its customers that generate 80% of its revenue and earnings -- its so-called 80/20 front-to-back practice. It's a strategy that has generated significant margin expansion in recent years.

It's also one that enabled the company to offset the combined effects of a slower economy and rising raw material costs in 2019. As such, management believes its full-year operating margin will expand by 100 basis points (where 100 basis points equals 1%) this year, with its enterprise initiatives responsible for 100 basis points of the move.

There could be more to come in the future as management believes it's only restructured its portfolio by 90%, and its 80/20 refocusing is only 70% complete.

Meanwhile, 3M has continually failed to meet its own guidance in recent years, and the recent disappointing first-quarter earnings appear to be more a result of its own issues than specific end-market concerns. As you can see above, 3M has reached a point where it's struggling to raise gross margin. Moreover, its less cyclical segments, healthcare and consumer, have underperformed in recent years, and now a slowdown in the overall economy has hit those areas, too.

Management's response is to continue its current business strategy and undertake the piecemeal action of reshuffling the organization of its business segments. Frankly, it doesn't seem like enough.

What 3M could learn from it

3M could do well to take a long, hard look at Illinois Tool Works' playbook. If the company is finding it hard to gain pricing power and expand gross margin through innovation, then perhaps refocusing on its key customers with its key products, in line with its peer, might not be such a bad idea. Illinois Tool Works has shown how it can be done, and perhaps it's time for 3M to follow suit.