It seems that a month doesn't go by without another industrial company announcing a major acquisition/divestiture, spinoff, or restructuring. If it isn't Danaher (NYSE:DHR) buying a $21 billion biopharma business from General Electric, it's United Technologies splitting into three companies or Honeywell spinning off noncore businesses.  But the one exception among the major multi-industry industrials has been the largest of them all, 3M (NYSE:MMM). That is, until last week -- when management announced a business realignment. Let's look at what it means for the investment case for the stock.

3M needs to do something

The company appears to be under pressure. Its valuation continues to command a premium to its peer group even though it has a patchy recent record of meeting its own guidance and has already opened up 2019 by lowering full-year expectations amid deterioration in end markets like China and consumer electronics.

Alongside all of this, the consumer and healthcare segments' growth has disappointed in recent years. This is a particular concern because the other three segments, namely industrial, electronics & energy, and safety & graphics, all have exposure to industrial production growth -- something widely expected to slow in the next couple of years. In other words, 3M needs to see strength in the healthcare and consumer businesses in order to compensate for any potential weakness in the other segments.

Mike Roman took over as CEO in the summer of 2018, and his first significant move to improve the company is to realign the portfolio from five business segments to four. The new business segments, which 3M will begin reporting on in the second quarter of 2019, can be seen in the chart below. 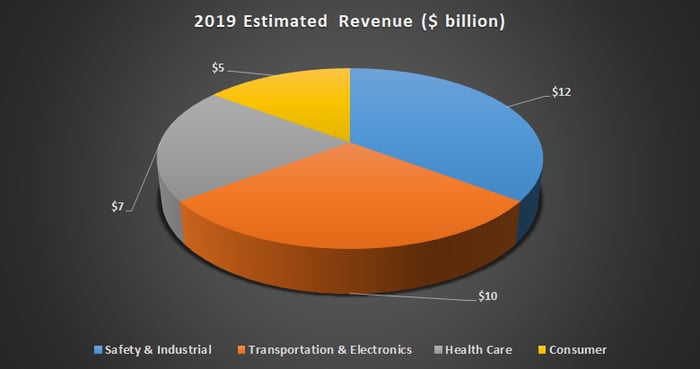 According to Roman, "Our new alignment will leverage our business transformation progress, accelerate growth and deliver greater operational efficiencies." But given that there are no significant divestitures announced, it's hard to see it as a major action to improve performance.

However, the portfolio realignment may make it easier in the future to address the possibility of a spinoff or sale of one of the segments, and the question now is which of the segments is most likely to be jettisoned and would it add value?

Probably the best comparison to make in this regard might be the split made when Danaher spun off Fortive (NYSE:FTV). The rationale behind the Danaher/Fortive split was that it created two companies exposed to broadly different end markets. The remaining Danaher has a medical focus, and Fortive is largely a collection of cyclical but highly cash-generative business. And the two businesses have different investment profiles. Both stocks have significantly outperformed the market since the split, and both have received a positive valuation rerating.

If 3M decided it was going to position itself to do a similar thing, then the biggest possibility is its healthcare segment. In fact, the recent realignment makes this more likely. I'll come back to that point in a moment, but first here's a look at the key changes from the realignment.

First, it's clear that the largest two segments, safety & industrial and transportation & electronics, are mainly a collection of cyclical businesses. For example, the personal safety solutions business has been added to the industrial businesses alongside the energy businesses (electrical power solutions), creating a highly cyclical catchall industrial segment. 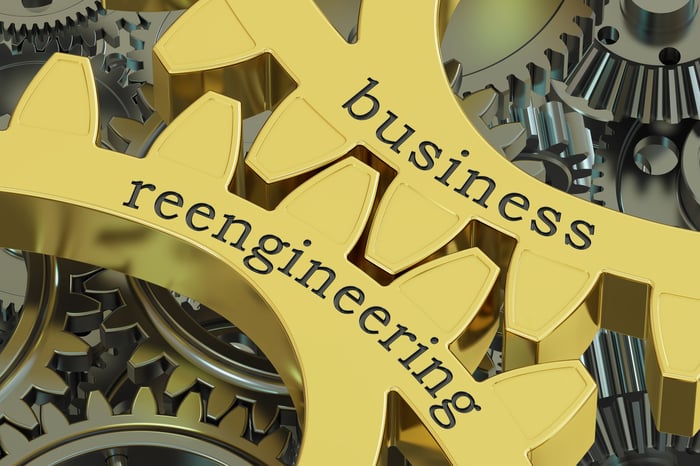 Second, the consumer business is basically the same with the addition of the retail auto care business.

In a nutshell, the automotive businesses are now spread across three segments, which is going to complicate matters if either of the two largest segments are being considered for a future sale/spinoff. Meanwhile, the lack of any significant change at consumer suggests management hasn't adjusted its view on the overall business for the long term.

However, the addition of the separation & purification business (with $900 million in 2018 sales) to the existing healthcare segment ($6 billion in sales in 2018) is significant, and strips the industrially focused segments of any noncyclical revenue streams. It also enhances the healthcare segment and creates a $7 billion revenue segment with a different profile to the rest of 3Ms businesses.

Don't be surprised if the business realignment leads to calls for the healthcare business to be separated. It could possibly command a relatively higher valuation on a stand-alone basis. And given its relative underperformance in recent years, it could attract acquirers that feel they could do better.

That, and other corporate action such as acquisitions or divestitures of other businesss within the portfolio might be a good thing for investors, particularly as 3Ms industrially focused businesses face a tougher year in 2019 due to slowing growth in the industrial economy.