Please ensure Javascript is enabled for purposes of website accessibility
Log In Help Join The Motley Fool
Free Article Join Over 1 Million Premium Members And Get More In-Depth Stock Guidance and Research
By Billy Duberstein – Jun 1, 2019 at 10:46AM

Microsoft just picked up a nice award in the AI subsegment of machine translation.

The battle for artificial intelligence supremacy is on, and it could yield big financial benefits for whoever wins the AI race. According to Market Research Engine, the global AI market is expected to skyrocket at a 37% compound annual growth rate over the next five years, reaching $191 billion by 2024. Microsoft (MSFT -0.20%) is certainly one of the leading players in the field, and just claimed a top prize in a yearly competition for one interesting field of AI: voice recognition and translation.

The translation segment of the AI market is expected to grow at a 14.6% CAGR over the next few years, to reach $983.3 million by 2022, according to Grand View Research. Another research firm, GM Insights, predicts a $1.5 billion machine translation market by 2024.

The text and voice translation market is much more than a mere translator on your smartphone for when you visit a foreign country. Companies looking to expand their geographic reach and large organizations that employ people from all around the world will greatly benefit from accurate, instant, and efficient language translation for employee memos, product manuals, and public websites. 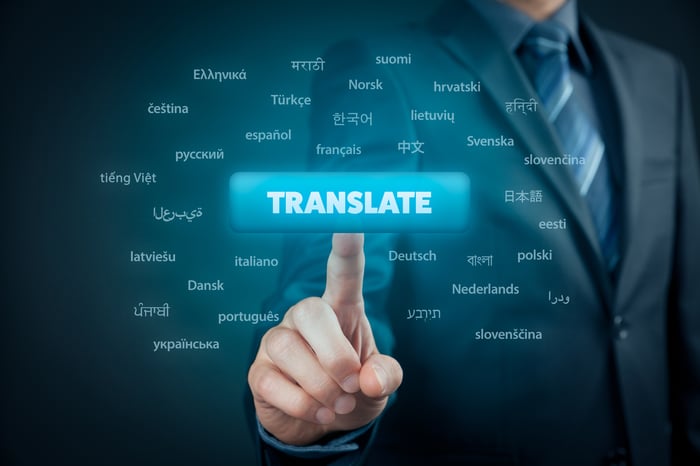 This year marked the fourth Conference on Machine Translation (WMT19), in which some 50 tech teams across businesses and academic institutions put their machine-learned translator up against others in 19 different translation categories.

This year, Microsoft's Research Asia team won eight of the 19 categories, including Chinese-English, English-Finnish, English-German, English-Lithuanian, French-German, German-English, German-French, and Russian-English. Microsoft also finished second in English-Kazakh, Finnish-English, and Lithuanian-English. This is actually a stellar record, as the Microsoft Asia team only participated in these 11 categories.

In the prior year, Microsoft claimed that its machine translation system was able to perform with the same accuracy as human translators. That was disputed by some competitors, but Microsoft's improvement to win this year's competition shows that it still has a best-in-class offering.

You might think translation would be relatively simple and programmatic, but Liu went on to say that machine translation is actually quite tricky, due to the idiosyncrasies of human languages: "Language is complex and nuanced, as people can use different words to express the exact same concept. Hence, developing multidimensional algorithms is important in evolving machine translation systems so that they can deliver better outcomes."

According to G2 Insights, Microsoft's machine translation is neck-and-neck with Alphabet's (GOOG -0.36%) (GOOGL -0.58%) Google Translate program for leadership in this emerging category. In addition, Amazon (AMZN 1.20%) Web Services and IBM (IBM -0.57%) are also shown to have top offerings.

It's no coincidence that these are also the leading cloud computing players. Since we're still in the early innings in the movement of enterprise workloads from on-premise data centers to the cloud, many businesses are still assessing these cloud vendors. Those that offer premier enterprise tools (like machine translation) could thus be in the running to win more contracts.

Judging by the recent machine translation award and stellar first-quarter earnings report, it looks like Microsoft is off and running in this all-important race.