The company is already delivering on its initiative to provide new content releases more frequently, and mobile could be the next major opportunity.

Activision Blizzard (ATVI -2.42%) is currently working through a transition year after suffering weakening player engagement in some of its biggest titles. One of those games is Overwatch, which is probably the most important franchise for the company right now, considering the potential monetization opportunities for the franchise across television, film, comics, consumer products, and esports.

Let's see if the the worst is truly behind the game maker and what upside investors can look forward to. 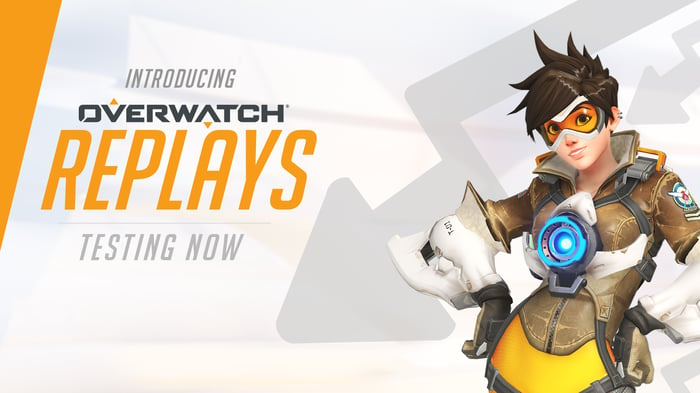 Overwatch launched in May 2016, and through 2017, the game was one of four franchises that generated two-thirds of the company's annual revenue. However, the game didn't make that list last year. Overwatch has probably reached its peak when it comes to selling new copies, which means the title is only going to make money going forward through in-game spending for character skins, emotes, and other cosmetic items.

Blizzard is already starting to release new content features to Overwatch, consistent with the company's effort to boost the development staff across several franchises by 20%. It's clear the company is moving fast on its strategy to ramp up the frequency of new updates to its games and potentially bring back some of those customers who stopped playing.

In-game revenue made up most of the top line in 2017 (the most recently reported year), so it's a big problem when your "tentpole" franchise has experienced a decline in monthly active users (MAUs). The company doesn't specify exact numbers for each title, but in SEC filings, the company has disclosed that Overwatch has been partly responsible for MAU declines in the Blizzard segment in recent quarters.

It's probably not much of a decline relative to the 40 million players who have bought the game. In the first quarter, the Blizzard segment had 32 million monthly active users -- down six million compared to the year-ago quarter. But with the company trying to grow the franchise across esports and other opportunities, it's not good if the game isn't keeping players engaged.

The player base has been requesting certain features to improve the competitive experience in Overwatch. However, Blizzard has been slow to respond, which probably stems from its lack of resources over the past few years and the priorities of what the engineers need to address in their internal roadmap for the game. But with the recent boost in development staff, it seems Blizzard is starting to deliver on some of those requested features.

For example, Blizzard just launched the Overwatch Workshop to great reviews since its release in May. There are two additional features players have been requesting. One of them -- a replay system that allows players to go back and watch their past 10 matches -- is already available. So what's the big deal about replays?

Overwatch is easy to get into but difficult to master. Just like anyone can pick up a golf club and hit some balls at the local driving range, it's not so easy becoming the next Tiger Woods. That's Overwatch in a nutshell, and that's why the best players in the world are getting signed to contracts that pay a minimum of $50,000 to participate in Overwatch League.

For a game that's so difficult to master, Overwatch hasn't included any educational features to teach casual players how to improve. With the new replay feature, players have an additional incentive to play more matches so they can hit rewind and review their mistakes.

Blizzard hasn't announced the second feature, but I believe it will be another significant improvement to the game experience and potentially get the player base engaged.

Call of Duty Mobile is generating tremendous buzz ahead of its launch, and it could make a big splash in the fast-growing mobile game market. It will be free to play and include a battle royale game mode, setting the title up to leverage the increasing popularity of first-person shooters on mobile devices, as well as the success of other battle royale shooters on mobile, such as Fortnite and PUBG Mobile.

It's estimated that the mobile version of Fortnite made $500 million during its first year after launch. PUBG Mobile has grossed more than $320 million since its launch, according to data from SensorTower.

Call of Duty is itself one of the biggest brands in gaming, and Tencent -- the largest video game company in the world based on revenue -- will release Call of Duty Mobile in China. There's high anticipation for this release, with over 10 million pre-registrations so far.

With several initiatives under way, including upcoming feature content for existing games, including Overwatch, Call of Duty, Candy Crush, Warcraft, Hearthstone, and Diablo, and the launch of Call of Duty Mobile, Wall Street analysts are already seeing a road to recovery for Activision Blizzard.

Currently, analysts see the company growing revenue and adjusted earnings by 11% and 18%, respectively, in 2020. These growth initiatives spark the company's next leg of growth. If Activision Blizzard delivers on those expectations, the stock can begin to recover from its recent lows.