Please ensure Javascript is enabled for purposes of website accessibility
Log In Help Join The Motley Fool
Free Article Join Over 1 Million Premium Members And Get More In-Depth Stock Guidance and Research
By Keith Noonan, Rich Smith, and Chuck Saletta - Jun 3, 2019 at 8:31AM

Impressive payout histories and sturdy businesses suggest that you can count on these dividend stocks.

Great dividend stocks can provide investors with regular sources of income, and the opportunity to leverage the power of compounding through dividend reinvestment and long-term holding. The best of these companies will allow you to invest with a set-it-and-forget-it mindset, delivering steadily increasing dividends that can be harnessed to achieve your financial goals.

For a survey of trusty dividend stocks that look primed to keep cash flowing back to shareholders, we put together a panel of Motley Fool contributors and asked each to profile a stock that's on track to keep the checks coming indefinitely. Here's why they think that ExxonMobil (XOM 0.79%), Enbridge (ENB 0.23%), and Federal Realty Investment Trust (FRT) are stocks with serious dividend longevity. 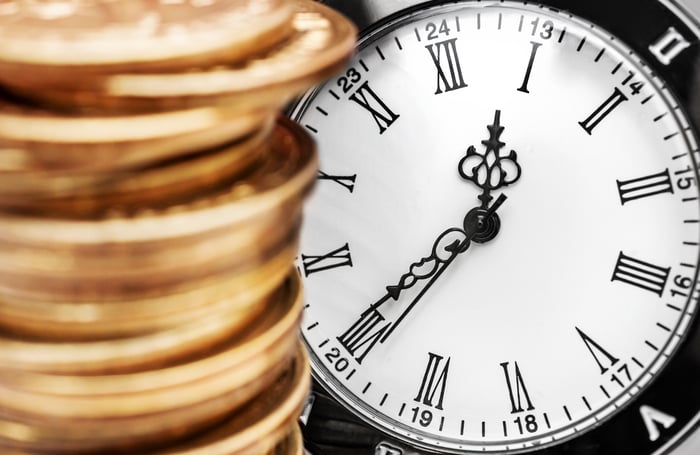 Rich Smith (ExxonMobil): A successor to John D. Rockefeller's Standard Oil Company founded in 1870, ExxonMobil will turn 150 next year. That's about six generations, or two human lifespans. But what are the chances that ExxonMobil, and its generous 4.7% dividend yield, will stick around for the rest of your life?

Honestly, I'd say the odds look pretty good. Not only is Exxon stock a fine pick for dividend income, and a decent value stock as well -- Exxon shares cost less than 17 times earnings, when the average stock on the S&P 500 costs more than 20 times earnings -- but I also think Exxon has a bright future whatever happens to the oil economy.

Consider: There's a lot of talk these days about global warming and a "Green New Deal" -- which sounds like bad news for an oil company. But even if oil does go out of fashion (I personally don't see this happening anytime soon), oil and natural gas aren't just useful as fuel sources. Exxon's chemical unit, for example, produces olefins, polyolefins, aromatics, and various other petrochemicals from the oil and gas Exxon extracts from the ground.

Granted, the chemicals unit isn't as profitable as Exxon's better-known upstream oil production business, but it's much less capital-intensive as well. And as for the energy business, well, worst case -- if the world one day decides to "go green" and abandon oil and gasoline as fuel sources entirely, Exxon can always just buy a green energy business or two, and go from there. With $307 billion in market cap, Exxon has a lot of value to deploy wherever it wants to.

If Exxon ends up defying the oil skeptics, and remains in business for another 150 years, I wouldn't be surprised.

A critical part of the continent's energy infrastructure

Chuck Saletta (Enbridge): The beauty of Enbridge is that it runs an absolutely critical business that virtually everyone needs, but nobody particularly wants in their backyards. It moves oil and natural gas around in pipelines, getting paid to take energy from where it's produced and processed to where it's used. Generally less expensive and a safer way to move energy around than trucks or trains, pipelines are in demand by the industry.

But because nobody particularly wants a pipeline in their backyard, right-of-way permissions are often expensive and time-consuming to get. In addition, once one pipeline secures permission to travel through an area, people are often reluctant to approve another, or even expand the capacity of one already in place. As a result, pipeline companies like Enbridge can often price their services at a high enough level to reliably earn solid returns on their investments, once their pipelines are operating.

A Canada-based company, albeit one with substantial U.S.-based assets, Enbridge has increased its dividend in Canadian dollars on an annualized basis for decades. With its dividend well-covered by its operating cash flow, and its business so critical to the infrastructure of the continent, Enbridge looks capable of continuing its payments for decades to come.

While there are no guarantees in investing, Enbridge is among a small pool of companies that truly looks capable of paying its investors a dividend for the rest of their lives.

Dividends beyond "the death of the mall"

Keith Noonan (Federal Realty Investment Trust): As the name makes explicit, Federal Realty Investment Trust is a real estate investment trust (REIT). It generates rental income from over a hundred large commercial properties located in high-value markets. Its stock yields a solid 3.1%, and barring any huge shakeups for the value of its assets, the company will likely continue its dividend.

By virtue of its status as a REIT, Federal Realty is actually required by law to pay out at least 90% of its income to shareholders in the form of cash dividends. That means that whether the company continues to pay its dividend depends only on its portfolio of commercial properties remaining profitable.

The company has avenues to steady long-term growth as it acquires new properties, redevelops existing properties, and continues to hike rents. E-commerce is a powerful force that will continue to weigh on traditional brick-and-mortar businesses, and this threat is likely a significant factor in Federal Realty stock posting more muted gains as leading REITs have taken off this year.

It's reasonable to expect that a significant fraction of large malls will fold in the coming decades, and the e-commerce shift is one that Federal Realty will have to contend with, and keep in mind with its redevelopment projects. However, many of the company's properties are located in desirable neighborhoods and urban areas that will likely see more favorable dynamics for large commercial centers. Federal Realty also owns residential properties and mixed-use properties that combine lodging, shopping, spa, and dining outlets.

The company has increased its payout each year for 51 years straight -- putting it among the elite ranks of the Dividend Kings, and making it the REIT with the longest record of consecutive annual payout growth. Federal Realty has also raised its dividend 50% over the last decade; that's not exactly rapid expansion, but it's still solid, normal for its industry, and enough to handily outpace inflation.