The company is selling into high demand for large truck classes.

In a scenario similar to its last sequential quarter, Navistar International (NAV) again benefited from buoyant sales of its heaviest trucks in its most recent reporting period. In fiscal second-quarter 2019 earnings issued Tuesday, commercial truck sales offset lower parts and global operations revenue, while financing income rose vigorously. Management raised the manufacturer's full-year earnings guidance, with one significant caveat, which we'll discuss below. Note that all comparative numbers in this article are presented against the prior-year quarter.

What happened with Navistar this quarter? 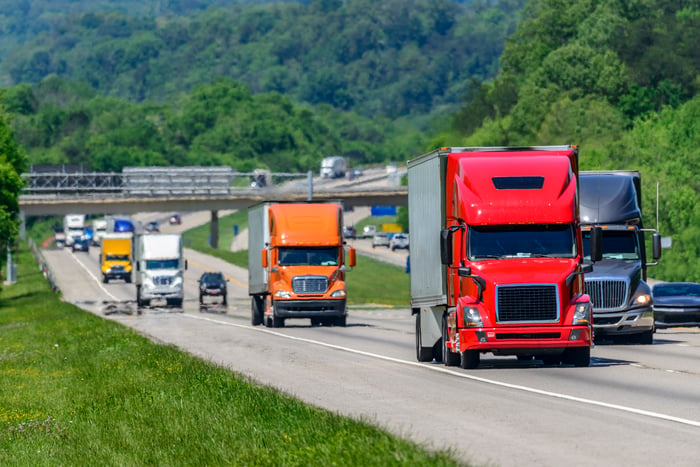 In Navistar's earnings press release, CEO Troy Clarke praised the company's achievements during the last three months while also discussing the back half of the year and beyond:

In the second half, we believe our growth in market share will translate to improved revenues and gross margins that will generate higher adjusted EBITDA margins than in the first half. Our marketplace progress, which has delivered our strongest backlog this decade, provides confidence that both 2019 and 2020 will be good years for Navistar.

Due to a strong environment for truck sales and its continued high manufacturing throughput, Navistar adjusted various outlook items for the remainder of the year. The company raised its revenue estimate to $11.25 billion-$11.75 billion, from a previous range of $10.75 billion-$11.25 billion. Adjusted EBITDA for fiscal 2019 has been bumped up to a band of $875 million-$925 million, against the earlier expectation of $850 million-$900 million.

While investors cheered these revisions and pushed Navistar shares up 9% during the trading session following the earnings release, shareholders should be aware of a significant caveat. Current estimates don't address the potential effect of threatened tariffs on goods incoming from Mexico into the U.S.

The first wave of tariffs, recently announced by the Trump administration, are due to take effect in just a few days and will potentially escalate further. According to Navistar's press release, when additional information on the threatened tariffs becomes available, "the [company's guidance] will be reassessed and, if necessary, adjusted accordingly."

Why Shares of Navistar Are Soaring Today
405%