The Chinese electric-car maker's recent results, a joint venture many are calling a government bailout, and cuts to its international presence have sent investors to the sidelines.

Shares of NIO (NIO -6.44%), one of China's leading electric-car makers, were down more than 10% in afternoon trading on Thursday, June 6. As of this writing near the close of business, shares have regained some of their losses but remain on track to close down about 7%.

Since going public on the New York Stock Exchange in 2018, NIO's shares have been very volatile. Twice they climbed more than 60% from the initial public offering (IPO) price, but also fell by double-digits on numerous occasions. Now, they're trading more than 77% below their all-time high and are down 58% since NIO started trading on the Big Board. 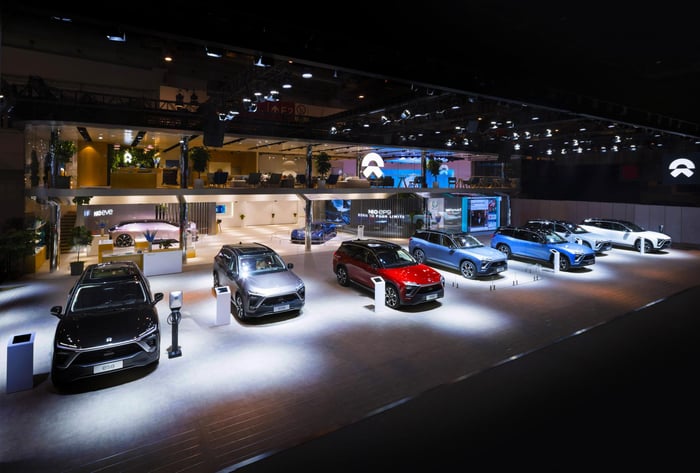 Electric Vehicles (EVs) have a bright future. NIO's role in that future is far from certain. Image source: NIO.

There isn't one single event investors can point at today to explain the sell-off -- no press releases or other material news coming from the company. However, positive rumors out of Tesla (TSLA 0.91%) could have something to do with it.

According to sources, Tesla is on track to deliver a record number of vehicles this month, returning to big growth after stumbling earlier this year. While Tesla's strong deliveries are primarily being highlighted in North America and not China, Tesla's expanded presence in China, including plans to offer a lower-priced Model 3 made in the country, is likely being viewed as a serious threat to NIO.

Nio continues to face a number of headwinds, as was noted following its first-quarter earnings report in late May. Moreover, the company has recently gotten in bed with the Chinese government in what many industry observers are calling a "bailout" in its joint venture with state automaker GAC. At the same time, NIO recently shelved its plans to start selling cars in the U.S. in 2020 citing ongoing trade friction between the two countries, as well as uncertainty around distribution.

On one hand, NIO's backing by the Chinese government is good in that it supports the upstart electric-auto maker as it attempts to reach critical mass. That's likely to prove good for the EV market and for EV buyers, as well as the environment, over the long term.

But for investors, it's far less clear what NIO's future will look like. The company continues to burn through a lot of capital, and while it does have new models coming to market soon -- which will hopefully spur sales growth again -- there remains substantial and growing competition from companies like Tesla, BYD, and others.

Five years from now, today's share price might look like a bargain, but there's far too much uncertainty (read:risk) that NIO must navigate before it can prove a viable investment. I think investors would do best to wait this one out for now.