One of the electrical-component manufacturer's key industries is slowing down.

Shares of Littelfuse (LFUS -0.16%) fell 18.8% during the month of May, according to data provided by S&P Global Market Intelligence. The move erased the stock's gains for the year. As of the end of April, shares had been up 17.7% in 2019.

Littelfuse, which manufactures fuses, circuit breakers, and other electrical circuit protection components, had been growing like gangbusters, reporting double-digit income growth for most of 2018. Revenue was growing fast, too: in Q3 2018, for example, the company's revenue was up 38% over the prior-year quarter. 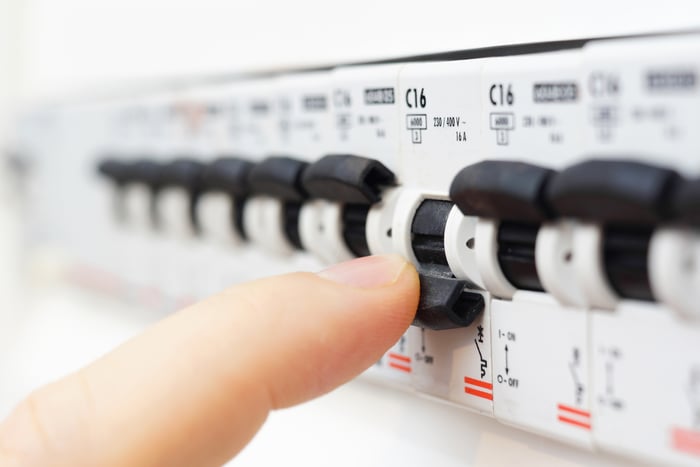 Littelfuse's stock underperformed in May, thanks to a rough earnings report. Image source: Getty Images.

But organic revenue growth has badly slowed over the past year. Quarterly revenue was up 11% year over year in Q2 2018, 8% in Q3 2018, and just 4% in Q4 2018. Littelfuse reported earnings from Q1 2019 on May 1, and organic revenue actually declined by 2.7%. The company also posted weak guidance for Q2. Although earnings growth continued -- and the company had forecast the revenue decline on the prior-quarter's earnings call -- nervous investors still fled the stock.

Because Littelfuse primarily manufactures components that are used in larger devices and equipment like appliances and automobiles, it tends to be a cyclical business that's dependent on how well other industries are doing. Management blames the current slowdown on high-channel inventories and a slowdown in the Chinese automotive-manufacturing sector. Indeed, the company's automotive unit was hit the hardest in the latest quarter, with revenue down 10% year over year.

Littelfuse is a cyclical company, and it's currently hitting a downturn in the cycle. Management expects to see overall improvement by Q3 2019, but it's unclear where the global auto market is headed, not to mention an appliance market that's already been hit by U.S. tariffs and a global construction market that also may be cooling.

It might be tempting to jump into Littelfuse now, as it trades at a discount to its April prices, but investors may want to hold off and see where these industries are headed before picking up shares. If weakness in Littelfuse's end markets continues, there may be more downside to the stock than upside right now.