While most investors are focused on its response to the 737 MAX crashes, the aerospace giant's other planes and operating units are quietly gaining altitude.

There's no way to avoid the fact that the issues around the 737 MAX will be key to determining the prospects of Boeing (BA 0.02%) for the foreseeable future. Indeed, CEO Dennis Muilenburg has made it clear that getting the aircraft back into service is the company's No. 1 priority. Therefore, Boeing stock should be avoided by anyone who doesn't believe that will happen in a timely fashion. That said, looking beyond the 737 MAX, Boeing is actually making good progress on its other key objectives in 2019.

The latest on the Boeing 737 MAX

Before we look at matters non-737 MAX, let's pause and digest the latest news regarding that aircraft. In the latter half of May, press reports appeared quoting sources "familiar with the matter" as saying that U.S. aviation officials believed a bird strike led to erroneous data being fed to the Maneuvering Characteristics Augmentation System (MCAS) prior to the Ethiopian Airlines crash. 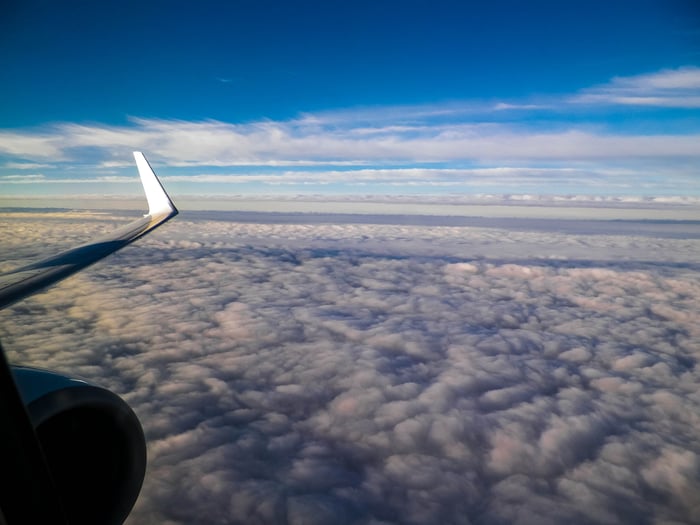 If the reports are accurate, and it turns out that a bird strike on the angle of attack (AOA) sensor occurred with the Ethiopian airlines crash then it would suggest that the problem doesn't lie with a failure in the MCAS software or some other issue related to the functioning of the sensor. To understand the importance of this let's refresh on what happened.

The two 737 MAX crashes were caused by a sequence of events that began when erroneous data from an AOA sensor caused its MCAS to incorrectly assess the plane to be at risk of stalling. In response, the MCAS lowered the plane's nose. When the pilots attempted to compensate, the software repeatedly overrode them, preventing them from halting its rapid descent. To avoid similar situations in the future, Boeing has updated the software to add additional layers of protection to the MCAS, limiting when and how it can act, preventing it from activating based on data from a single sensor, and making it easier for pilots to override.

If it turns out that the crashes can be traced back to simple physical damage to the AOA sensors -- bird strikes are an unavoidable part of flying -- and Boeing has improved how its MCAS deals with such situations, there's a good chance that the 737 MAX will be back in commercial service relatively soon.

The impact of the 737 MAX's troubles can already be seen in Boeing's first-quarter segment earnings. During the earnings call, CFO Greg Lewis noted that the company "booked approximately $1 billion of additional costs due to the adjustment to the production rate to 42 a month" on the 737 MAX. For reference, the company had previously planned for the plane to have a production rate of 52 a month in 2019.

However, Boeing made good progress in other areas. For example, it successfully ramped up the 787 production rate from 12 a month to 14, and is cutting its unit production costs on the planes. A recent conference, Muilenburg said that for the 787s, "the margin expansion is related to mix improvements with the 787-9 and 787-10. That will continue, that favorable mix is continuing to move in that direction." Moreover, he said, the company sees "another significant wide-body replacement wave coming early in the next decade, [and the] 787 and 777X are both well positioned for that."

Speaking of the 777X, Boeing has made some headway in its efforts to fill the production gap as it shifts away from the legacy 777 and toward the new 777X -- the first delivery of which is expected to happen in 2020. The company recently won 2 new orders for the 777 and 18 new orders on the 777X, and hopefully, more are to come at the Paris Air Show this summer.

Muilenburg has stated that his goal is for Boeing Global Services (BGS) to deliver $50 billion in revenue, and as the chart below shows, orders and revenue continue to progress at a healthy pace. Despite a 17% boost in revenue in the first quarter, BGS kept its backlog stable on a sequential basis at $21 billion thanks to $4 billion worth of orders.

As a reminder, Boeing's rolling BGS revenue is close to $18 billion, so this BGS backlog and its orders growth history suggests a lot more growth to come. 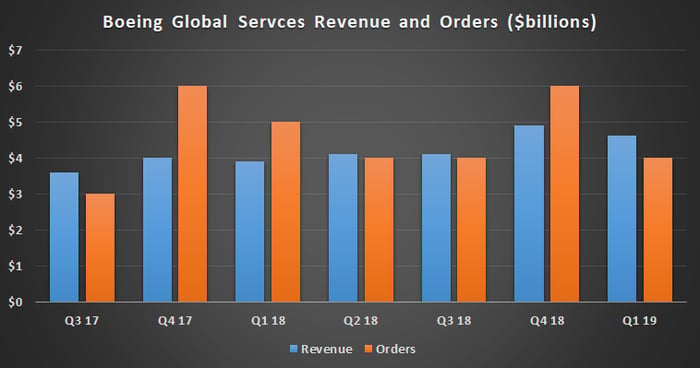 Investors can't afford to ignore the Boeing's 737 MAX issue -- it's having far too significant an impact on the company's bottom line.

On the other hand, if you feel confident about the future of the 737 MAX program, then the other parts of Boeing's business should encourage optimism over the stock. The company's other aircraft programs are on track, with particularly notable improvements for the 787. Its defense unit continues to grow, and BGS looks set for another strong year. Now, all Boeing has to do is get the 737 MAX flying again.