For this top supplier of farm equipment, there wasn't just one reason for the underperformance.

Shares of agricultural equipment manufacturer Deere & Co. (DE 2.12%) fell by 15.4% in May, according to data provided by S&P Global Market Intelligence. That pushed the stock into negative territory for the year, although it's since clawed its way back to just above the break-even point. The stock began sliding as the company's earnings report approached and then dropped sharply after it disappointed.

On May 17, Deere released its Q2 earnings report for FY 2019. Deere uses an unusual 52-week fiscal year that ends each quarter on the last Sunday of each reporting period, so this report covered the period from January 28 through April 28, 2019. 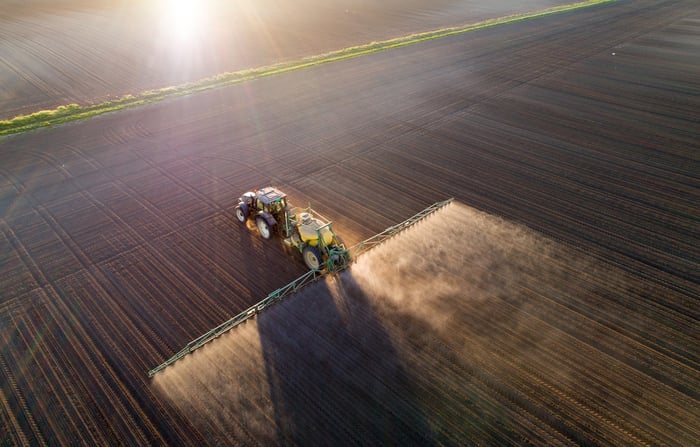 It may be a rough road ahead for top ag industry equipment maker Deere & Co. Image source: Getty Images.

Earnings were pretty dismal: Revenue only increased by 6% year over year, to $11.3 billion, but net income fell by 6%, to $1.1 billion. Worse, Deere cut its FY 2019 guidance for sales growth, now anticipating 5% growth as opposed to 7%, and also slashed its net income guidance by 8.3%, to $3.3 billion. Unhappy investors sold off the stock.

Deere's management blamed several factors outside of its control for the company's problems. Domestically, bad weather -- including heavy rains and flooding in the Midwest -- have many farmers delaying big equipment purchases. Overseas, an outbreak of African swine fever in China is expected to reduce that country's swine herds by an unprecedented 20%, drastically lowering demand for soybean meal, a key component in swine feed. That lower demand for soybean meal, coupled with the ongoing trade war with China that's already impacting soybean sales, is also having a negative impact on equipment sales.

Unfortunately, nobody knows exactly when any of these problems will be mitigated...or whether they'll get worse. While inclement weather is always a risk when investing in the agricultural sector, the issues surrounding soybeans could take much longer to resolve. That makes this a very risky time to put money into Deere stock, at least in the short term.