The first major contribution to Disney (DIS 2.21%) from the 20th Century Fox acquisition is a big flop. Dark Phoenix, the last chapter in the now 20-years-running X-Men franchise, had a meager showing on its opening weekend.

With more blockbuster-worthy competitors hot on its heels in the next few weeks, things are unlikely to get much better for the story of Jean Grey. Disney investors, if you don't know who this Marvel character is, no need to bother. Everything will be OK.

Production on Dark Phoenix did not go well. The movie actually finished filming two years ago but was subsequently subjected to reshoots and other post-production modifications. That's typically not a good sign (remember Solo: A Star Wars Story?). The release date was also moved several times -- in part because of the production drama, but also due to the subsequent takeover announcement by Disney. The last thing the two newlywed movie studios wanted was their feature-length films directly competing with each other. 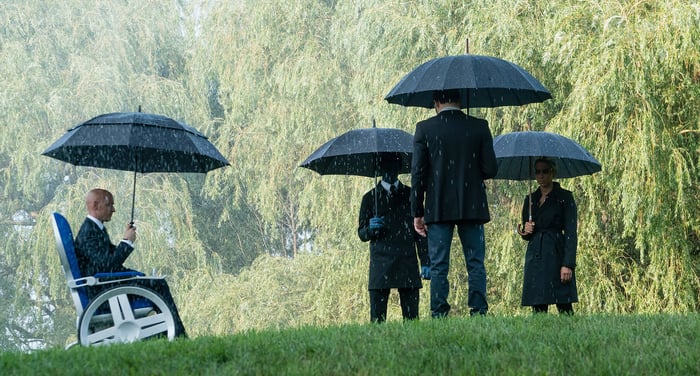 After all was said and done, Dark Phoenix is estimated to have cost well over $300 million to make and promote. That's a budget worthy of a major box-office hit. But it was hardly the reception the superhero flick received. As of Tuesday, the movie's Rotten Tomatoes score from critics is a dismal 23%, and it has a better-but-not-great 64% audience score.

After its first weekend on the silver screen, Dark Phoenix has made just shy of $33 million stateside and $104 million overseas for a grand total of $136.6 million in gross ticket sales, according to Box Office Mojo. For a more modestly budgeted film, that's a great haul; for a big-budget superhero event, it means red ink.

The good news is that the heavy lifting on Dark Phoenix was finished by Fox before the merger with Disney. Everyone knew the press going into opening weekend for the final iteration of this X-Men franchise wasn't great. It's likely the forecasters within Disney had already baked a lackluster performance into their guidance for the current quarter -- especially considering Men In Black: International and Toy Story 4 are getting released hot on the Phoenix's heels.

Disney has also hinted at a reboot. Perhaps some Disney/Marvel-magic can be done to breathe new life into the X-Men franchise. One thing's for sure: Marvel under Disney's patronage knows how to drum up business for a finale. Avengers: Endgame is near Avatar's all-time gross box office record and is currently sitting at $2.73 billion worldwide. There are over 20 films in the current Marvel Cinematic Universe, and clearly there is no sign of movie-goer fatigue.

Whether the X-Men get a makeover anytime soon or not, there's more silver lining: The last 20 years of X-Men movies can still contribute to the bottom line via Hulu (now majority owned by Disney) or via the upcoming streaming service Disney+, which launches this fall. Event-driven revenue from the box office will continue to be an important aspect of Disney's business -- the studio entertainment segment made $3.96 billion, or 13% of total revenue, during the first six months of the company's 2019 fiscal year -- but the streaming service is where the future lies. Once up and running, and with Hulu and ESPN+ likely riding sidecar, Disney+ could be a huge contributor to stable and predictable income. Just created this year, the direct-to-consumer segment brought in $1.87 billion in sales during the first six months of 2019, up 6% year over year before Disney+ even goes live.

20th Century Fox's first campaign carrying the Disney standard is by all counts a disappointment. There's no need for investors to hastily decry the merger yet, though.