The leading online provider of photofinishing products finally names a buyer, and it's not a pretty picture for investors who were holding out for more.

There are a lot of moving parts to still photography, and this week finds Shutterfly (SFLY) posing for its exit-strategy portrait. The provider of digital and traditional photofinishing products and services announced on Monday afternoon that it has accepted a buyout offer from funds managed by affiliates of Apollo Global Management (APO).

Wall Street may not seem impressed at first glance. Apollo will be cashing out Shutterfly investors at $51 a share, a mere 1.5% premium to where the shares closed on Monday. However, if we draw the starting line seven weeks earlier -- to April 23, when media reports initially surfaced detailing Apollo's interest in Shutterfly -- we would be looking at a more reasonable 31% premium to the buyout offer.

But if we grab that same stick of chalk and arbitrarily choose June 5 of last year -- the day when Shutterfly stock peaked as it briefly cracked the $100 ceiling -- we see a company cashing out its investors at a little more than half of where it was a year ago. This doesn't mean that the private-equity giant is taking Shutterfly investors for a ride here. If anyone else was willing to pay more than $51 a share for Shutterfly, that bidding card would've been raised by now. This is just a sad tale of Shutterfly biting off more than it could chew in an earlier rally that was ultimately too good to be true. 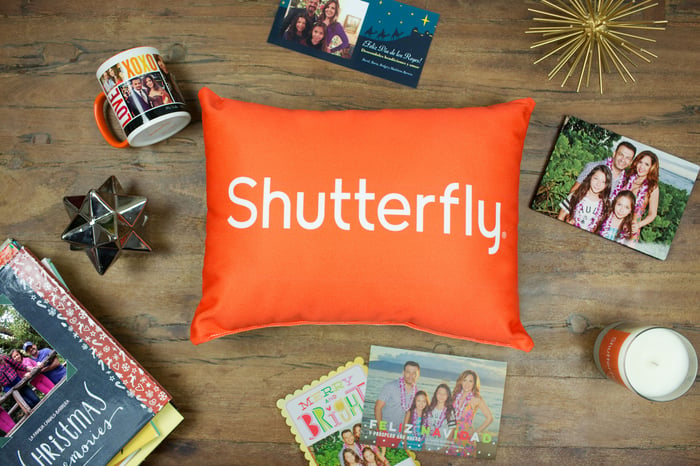 Shutterfly has been a pioneer in digital photo storage, prints processing, and image-customized merchandise for two decades, so it seemed odd at first when it announced in early 2018 that it was acquiring Lifetouch. However, it didn't take long for investors to reframe the purchase. Lifetouch is the leading provider of traditional school photos and related photography services, but every year it adds millions of new children -- or, more specifically, their parents -- to its rolls as it snaps yearbook sports pics or welcomes graduating seniors at its off-site studios for their cap-and-gown portraits.

Shutterfly was already getting a good deal for Lifetouch, paying just a third of its enterprise value for a purchase that would nearly double its annual revenue while contributing positive adjusted EBITDA. Investors got excited over the prospects of what Shutterfly could do as it pushed its new media products to Lifetouch customers. Lifetouch takes photos of 25 million students a year, covering 10 million households. A million new families enter the system as their firstborns hit kindergarten. The stock would go on to nearly double in the first four months after the deal was announced, but reality wasn't as kind.

By the end of 2018, Shutterfly was seeing weakness in its flagship consumer digital business, and the promised synergies were slow to develop. Shutterfly's board opened itself up to explore strategic alternatives, a move that eventually led to Apollo's winning bid this week at what is ultimately an uninspiring price.

Shutterfly investors will get roughly $1.74 billion in a deal that's valued at $2.7 billion after calculating its net debt position. The $51-a-share exit price is actually slightly less than where the stock was the day before the Lifetouch deal was announced, making this a round-trip to nowhere for investors over the past 16 months.

This won't be the end for Shutterfly. Apollo wouldn't be shelling out $2.7 billion to get this deal done -- and lumping Shutterfly together with Snapfish -- if it didn't think that it will be worth more in the future. However, for public investors, this is the end of the line, and it's not a very pretty picture.