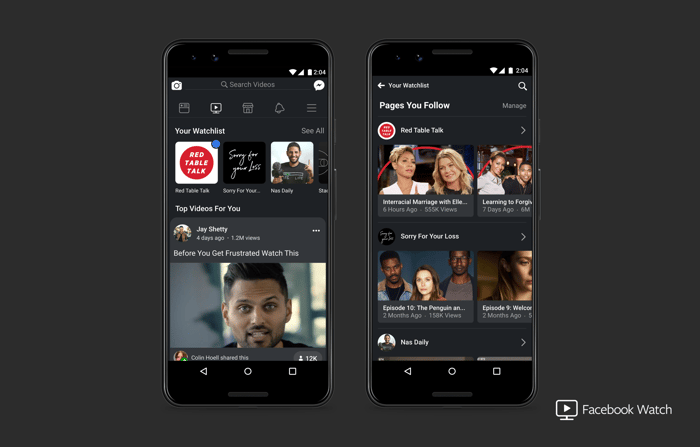 In a blog post this morning, Facebook provided some updates regarding the growth of Watch. The platform now has 720 million MAUs and 140 million DAUs, with both user metrics posting significant gains in a fairly short period of time. Engagement is also up, with DAUs spending an average of 26 minutes per day viewing content.

Facebook says it is testing new Watch features like "a way to find videos that are popular with friends," which sounds similar to YouTube's recommendation algorithms that regularly attract controversy for a variety of reasons including enabling the spread of misinformation -- a problem that Facebook also struggles with. Surely, nothing will go wrong.

Of course, in order for Watch to compete with YouTube, it needs to offer comparable monetization opportunities. Facebook says it is rolling out ad breaks (short mid-roll video ads) in Canada and will soon add support for five additional languages. The number of Pages using ad breaks has more than tripled over the past year, according to Facebook, with Pages bringing in over $1,000 in ad revenue jumping over eightfold.

Facebook's demand question has been answered

Facebook Watch is putting up some strong numbers, but it still has quite a way to go to catch up with YouTube. YouTube hit 2 billion MAUs last month and is aggressively expanding into the living room, thanks to ongoing adoption of set-top boxes. For example, streaming TV platform Roku says that Netflix and YouTube represent over 50% of all hours streamed. YouTube now streams over 250 million hours per day to TV screens, according to CEO Susan Wojcicki. Watch's gains in users and engagement is sure to only validate CEO Mark Zuckerberg's push into video.

"It's early, but one of the big questions around Watch that we had early on was to what is going to be people's demand to go to a separate tab to have an experience that's dedicated to interacting with people around a certain type of content," His Zuckness said on the April earnings call. "If you remember, the reason why we got to this strategy it was because people wanted to watch a lot of video, but we saw that passive consumption of video was displacing social interactions and News Feed."

It seems that big question has been answered.

Things May Finally Be Looking Up for Meta Stock
411%