Facebook shared an update on Watch, and the competition is on notice.

Facebook investors should be encouraged by the strong progress the company has made with its video platform over the last six months, and Twitter and Snap investors need to keep an eye on the fast-growing competitor. 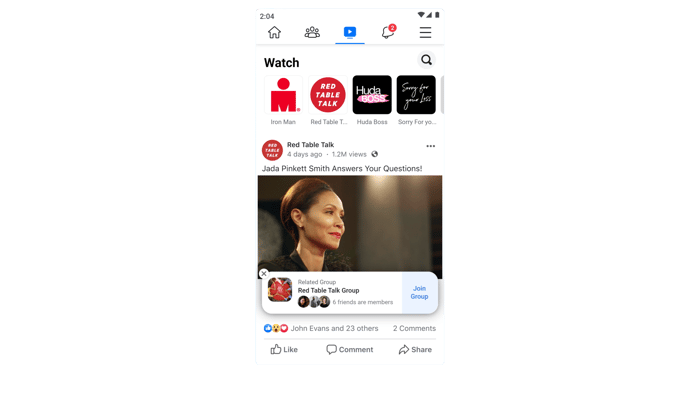 Along with its update on user metrics, Facebook also highlighted some of its Watch exclusives. The company reportedly laid out hundreds of millions of dollars to attract talent and produce original content for Watch, including Red Table Talk with Jada Pinkett Smith and Sorry For Your Loss with Elizabeth Olsen.

The company announced premieres for several new high-profile originals, including a reboot of MTV's Real World. It also announced it's bringing more sports content to the platform, with German and Australian partnerships offering highlights and commentary from various leagues.

Facebook's content investments are designed to bring more people to the video platform with the hopes they'll stick around to watch content created by independent publishers. To that end, the investments appear to be working. Not only is the average time spent per daily user up about 30% over the last six months, the number of Pages earning over $1,000 per month from Watch is up eightfold over the past year. Pages earning over $10,000 per month are up threefold. Since Pages share revenue with Facebook, that means Facebook is participating in those successes as well.

Twitter has focused on live-streaming events, mostly sports, to fuel engagement. The focus on video has helped grow revenue in recent quarters, and video ads now account for the majority of ad revenue for the company. Revenue increased 18% in the first quarter, but cost of revenue also increased 18% for the company. Management highlighted the increased spending on video content as a reason for the higher cost of revenue.

Snap is also spending on Snap Originals for its Discover section of Snapchat. Snap says it's seen excellent engagement with the original content. "The number of people watching Discover and their time spent watching content continue to grow," CEO Evan Spiegel said on the company's first-quarter earnings call. Snap has notably kept content and revenue-sharing costs under control while growing revenue, leading to gross margin expansion.

Facebook Watch is still a greater threat to Twitter and Snap than either company is to Facebook. Facebook's progress in increasing engagement over the last six months ought to encourage the company to keep investing. And that's bad news for Twitter and Snap.

Watch now has a user base comparable with both Twitter and Snapchat, and Facebook has a balance sheet that could completely lock out Twitter or Snap from any content it wants to pursue. Not to mention Facebook's ability to monetize that content is unparalleled by either smaller competitor and should make it more willing to spend. Considering the importance of video for Twitter and Snap, investors need to keep a close eye on Facebook Watch.