Dine Brands' (NYSE:DIN) IHOP restaurants are hoping their new burger promotion will be every bit as successful as last year's effort, which saw the pancake chain pretend to change its name to IHOb to underscore a new focus on burgers instead of pancakes (IHOP, of course, stands for International House of Pancakes).

While the IHOb branding was a major PR bonanza, there were also many who disliked it, and the new marketing campaign seeks to embrace the haters. The restaurant chain says it heard the internet's advice to "stay in their lane" and do what it does best, pancakes. So this year it is introducing a new line of Black Angus Steakburger "pancakes." 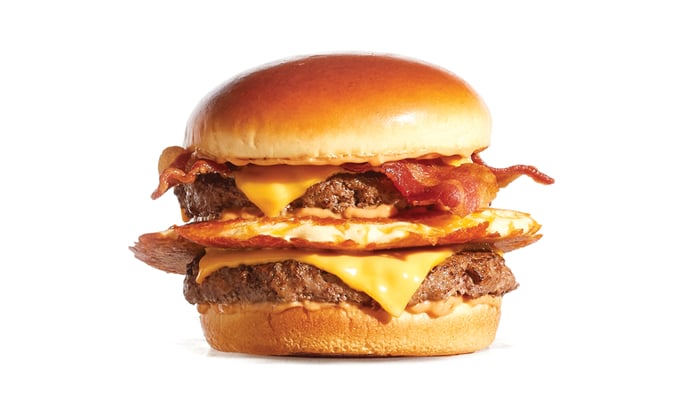 A different take on hotcakes

Dine Brands may just have another winning PR stunt on its hands. The new limited-time promotion offers three new items:

It's a bit of inspired marketing simply for the play on what a pancake is, but it also uses the concept of monetizing one's haters to great effect. Rather than apologizing and appeasing its critics, a response that often only encourages more bad behavior, the campaign turns the criticism on its head and uses the hate to make money.

Good, good...let the hate flow through you!

Obviously, by reintroducing the burger promotion IHOP really isn't "staying in its lane," but rather weaving across all the lanes to profit after last year's promotion was super successful.

In the first few weeks it ran, 20,000 media stories were published, it generated over 36 billion earned media impressions, and there were over 3.3 million tweets. Of course, IHOP's CMO Brad Haley also said some of those tweets "weren't very nice," and as part of the burger promotion, it addressed them.

IHOP created what it calls a "Bancake List" of the haters and is giving them a chance to get off the list and receive a gift if they tweet something nice about the chain's burgers.

It created a site where tweeters can check to see if they're on the list. If so, they can use a prewritten "apology tweet" that includes the hashtags #IHOPMadeMeSayThis, #IHOPBancakeList, and #Ad. If they're one of the first 2,000 people to do this by July 14, they will receive a $10 digital gift card.

Beyond the social media success Dine Brands enjoyed with last year's burger campaign, there was real financial reward as well.

IHOP president Darren Rebelez told analysts during last year's second-quarter earnings conference call that the promotional campaign, which lasted less than a month, caused burger sales to quadruple during the period and that dinner daypart sales surged 200 basis points. Moreover, burgers are still selling at twice the rate they were before the promotion. IHOP has now achieved five straight quarters of comparable store sales growth.

The lunch and dinner dayparts have always been an underutilized opportunity for the IHOP chain, and the burger promotion last year ended up flipping that script for the restaurant so that they became the strongest performers for the year.

While breakfast will always be the primary focus for IHOP -- it will indeed stay in its lane -- the burger promotions show how Dine Brands is using humor and social media to make an effective marketing campaign that boosts sales and its bottom line.