Please ensure Javascript is enabled for purposes of website accessibility
Log In Help Join The Motley Fool
Free Article Join Over 1 Million Premium Members And Get More In-Depth Stock Guidance and Research
By Danny Vena – Updated Jun 13, 2019 at 8:52AM

While it's already had a massive run, there is evidence to suggest that Roku's gains will continue on pace.

When any stock price rises more than 150% in a year, it's easy to wonder if it's jumped too far, too fast. If that increase is more than 240% in less than six months, investors might understandably think the stock is no longer a buy.

That latter scenario is exactly the case for streaming pioneer Roku (ROKU -0.22%) this year. Along with concerns about the increase, some investors are also avoiding the stock because the company remains unprofitable and sports a price-to-sales ratio of 14 for the trailing 12-month period, significantly higher than the 8.6 average valuation of its peers in the internet services and social media industry.

Yet, even in light of its lofty valuation and massive 2019 gains, there are at least three reasons to believe Roku might still be a buy. 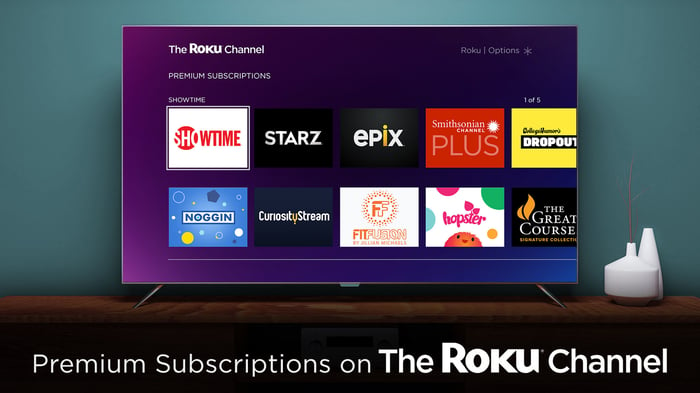 Roku has produced back-to-back quarters of stellar growth, helping put to rest fears of a slowdown that plagued the company last year. Roku grew revenue by 46% year over year in the fourth quarter, then followed that up by accelerating its growth to 51% in the first quarter, which is typically the company's softest season for sales growth. Platform revenue, which makes up the bulk of Roku's sales, is growing at an even faster clip, up 79% year over year.

Management expects the company's heady growth to continue. It signaled its confidence by raising Roku's full-year revenue forecast to $1.04 billion, representing growth of 40% year over year. The company regularly exceeds its own guidance, so the final results may be significantly better.

It isn't just Roku's revenue that's soaring. A number of underlying operational metrics are also driving sales. Roku's active accounts grew by 40% year over year in the first quarter, which marked the seventh consecutive quarter of account growth of at least 40%.

A growing user base and increased engagement have resulted in booming viewer metrics. Overall streaming hours grew to 8.9 billion in the first quarter, up 74% compared to the prior-year quarter. The average revenue per user is also climbing, most recently to $19.06 in Q1 (up 27% year over year).

Android, a product from Alphabet's Google, became the world's dominant smartphone operating system (OS) by Google licensing its technology to all comers. Roku has taken a page from Google's playbook by building an OS for connected TVs from the ground up and licensing it to a growing number of manufacturers. The company reported during the first quarter that 1 in 3 smart TVs sold in the U.S. contained Roku technology, making it the No. 1-selling smart TV OS in the country.

Roku has only just begun to partner with international television makers, looking to duplicate the strategy that has worked so successfully in the U.S. If the company is even moderately successful in its ongoing global expansion, that could offer another boost for results.

It's important to note that Roku ended 2018 on a sour note, with the stock losing more than half of its value, declining 40% for the year after gaining as much as 48% earlier in the year. At least a portion of Roku's blistering gains in 2019 can be attributed to gaining back what it lost. With a market cap of less than $12 billion, the stock's volatility will likely continue.

Still, a company that can produce this level of growth is certainly deserving of a higher multiple than its more slowly growing peers. If Roku continues to expand at this breakneck pace and you are an investor with a stomach for volatility, the current price could be a bargain.