Industrial distributor HD Supply Holdings' (HDS) first-quarter fiscal 2019 earnings revealed credible growth in its repair and construction categories. While the potential of import tariffs to affect the company's 2019 profit-and-loss statement is tangible, management believes that at most, HD Supply will experience some margin compression this year. In addition, the company still sees an expansion of its supply end markets in 2019.

Below, we'll hit headline numbers, dig into relevant details from the quarter, and discuss management's outlook earnings and tariffs. Note that all comparative numbers in this article are presented against the prior-year quarter.

What happened with HD Supply this quarter? 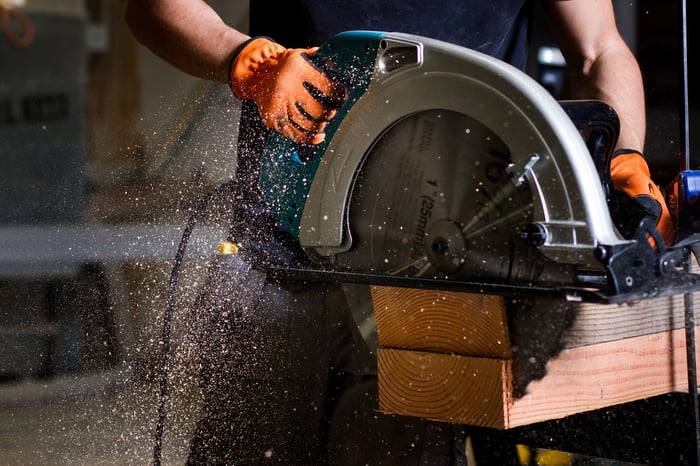 Investors have exercised caution around HD Supply's shares as of late due to concern over the impact of Section 301 tariffs (tariffs implemented by the Trump administration that center on alleged unfair practices by trading partners, chiefly China).

During the company's earnings conference call, CFO Evan Levitt noted that these tariffs have been increased from 10% to 25% on goods shipped after May 10, 2019. Levitt explained that it would take some time for the effect to work its way through the company's supply chain, and he provided the following additional context on the situation:

As we did with previous tariffs, we began working to offset the increased cost through vendor negotiations and productivity as soon as the tariffs were announced, although there was a shorter period between announcement and implementation than in previous roll-out. As a reminder, around three quarters of our Facilities Maintenance proprietary brands are sourced from China with somewhat less than 50% of those products included in the section 301 tariffs.

This accounts for less than 4% of total Company cost of goods sold. As market conditions allow, we intend to pass on the unavoidable cost increase from the rise in tariffs through price increase[s] but may be unable to pass along enough of a price increase to maintain prior year gross margin rates.

The anticipated impact will be that we [generate] the same or slightly more gross margin dollars than the prior year for each unit sold and our overall profitability is maintained, but there may be some gross margin rate compression on an annualized basis.

Despite the trade uncertainty, HD Supply still sees opportunities in its primary maintenance, repair, and operations (MRO) and specialty construction markets. The company anticipates total growth of its global addressable market of 2% to 3% in fiscal 2019.

Based on this opportunity, HD Supply projects fiscal second-quarter revenue of $1.62 billion to $1.67 billion. Net income is anticipated to range between $131 million and $142 million, and management expects diluted earnings per share (EPS) of $0.77 to $0.83. At the midpoint of this range, HD Supply will deliver earnings growth of nearly 14% against the $0.71 in EPS it notched in the second quarter of fiscal 2018.

Why Shares of HD Supply Are Up Today