Please ensure Javascript is enabled for purposes of website accessibility
Log In Help Join The Motley Fool
Free Article Join Over 1 Million Premium Members And Get More In-Depth Stock Guidance and Research
By Lou Whiteman - Jun 13, 2019 at 10:45AM

The company's chairman and CEO has submitted a buyout proposal.

Shares of DryShips (DRYS) traded up more than 23% on Thursday morning after the cargo ship operator said it has received a buyout proposal from an entity controlled by DryShips chairman and CEO George Economou. There's no deal yet, but the company's board has formed a special committee to consider the proposal.

The Athens, Greece-based company said it has received a nonbinding offer from SPII Holdings, which is controlled by Economou. It did not disclose the terms of the proposed deal. 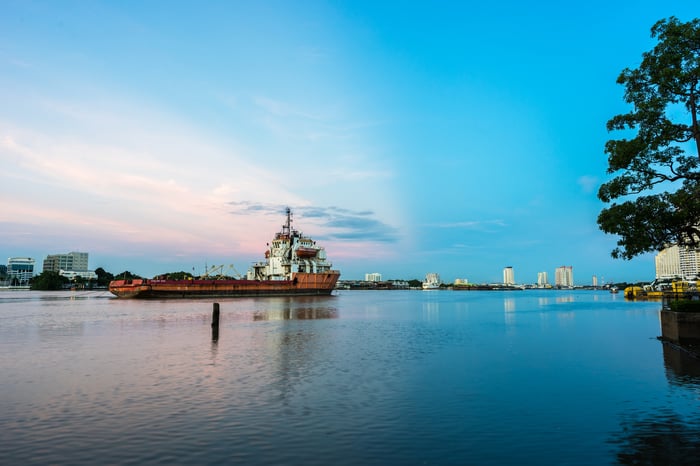 DryShips has been a volatile stock, tied to the highly cyclical shipping industry. The company, which operates a fleet of 32 dry bulk and crude carriers, was down more than 40% year to date prior to this disclosure on concerns about the impact of tariffs and trade wars on global shipping.

Given the recent downward pressure on the shares, and the uncertain outlook for the economy, it's no surprise that shareholders would cheer a buyout offer. But investors would be wise to not get ahead of themselves.

The SPII offer is nonbinding, and we don't yet know what Economou's group is willing to pay for DryShips. There's a lot that can go wrong between now and the potential consummation of a buyout. There is the risk that global trade could further deteriorate, or tensions could rise in the Middle East, eating into demand for DryShips' services and depressing its valuation.

Even after the Thursday bump, shares of DryShips still trade below where they were as recently as late April. There's good reason to be cautious about the potential deal.