When Universal Display (NASDAQ:OLED) established its new corporate venture subsidiary, UDC Ventures, last month, the first question that popped into my head as an investor was, "Why?"

It's an easy enough answer to find with a cursory read of the press release. According to the company, UDC Ventures "plans to invest in and partner with entrepreneurs, disruptive start-ups and innovative, emerging companies with an emphasis on technology platforms that have a strong proprietary position and significant growth potential."

To be fair, that's exactly the point of venture capitalism, though Universal Display says its sectors of interest include OLED technology and other organic electronics, displays, lighting, and materials science -- or essentially all the industries that stand firmly in its wheelhouse.

But when you dig past the surface-level discussion of UDC Ventures' stated purpose, I think there are three deeper reasons Universal Display -- even with its massively profitable, fast-growing flagship OLED materials and intellectual property licensing business -- decided to try its hand at venture capitalism. 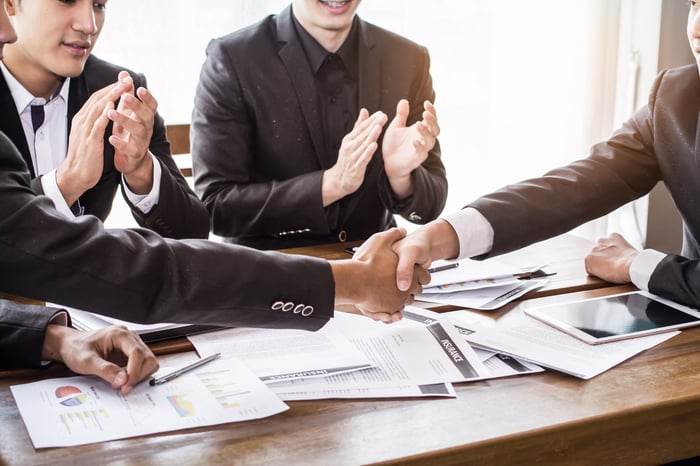 1. Putting all that cash to use

First and foremost, Universal Display's coffers are already overflowing; the company's balance sheet boasted nominal debt and $526.6 million -- or more than $11 per share -- in cash, cash equivalents, and short-term investments at the end of last quarter. And that pile of green is only getting bigger by the day as a growing number of unique OLED devices -- from paper-thin OLED televisions to foldable OLED phones -- hit the market, and components manufacturers begin to utilize the billions of dollars they've invested in recent years toward ramping up their OLED manufacturing capacity.

But in a relatively low-overhead business, Universal Display can only spend so much on research and development to continue advancing its proprietary technology. And since initiating its (admittedly modest) dividend in early 2017, the company has already tripled its payout from $0.03 per share initially to $0.10 per share as of the most recent quarter.

It makes sense, then, to put those excess resources to work and see what individuals and start-ups outside Universal Display's walls can do to advance the industry.

Universal Display has an ironclad grip on the OLED market with its comprehensive portfolio of more than 5,000 issued and pending patents worldwide. But bears have unsuccessfully argued for years that, as certain key PHOLED patents expire, Universal Display could see its lucrative licensing and materials revenue streams dry up if original equipment manufacturers opt to either produce their own materials or go with those made by another, cheaper source.

But Universal Display knows all too well it can't afford to ignore the potential rise of competing technologies as well. Take MicroLED, for example, a technology Apple has reportedly researched despite its own subsequent increased adoption of OLED (in the Apple Watch and higher-end iPhone models), and which Samsung has recently embraced for use in its large-screen TVs to compete with LG's leading OLED models.

Finally, Universal Display has proven in recent years that it's not afraid to make acquisitions when the opportunities arise. Almost exactly three years ago, for example, it spent $36 million to purchase longtime partner and contract research organization Adesis, then moved to nearly double Adesis' available workspace by acquiring a 47,500-square-foot research facility the following year.

We also can't forget UDC shelled out $105 million to acquire more than 1,200 OLED patents from Fujifilm in 2012, and paid 87 million euros (just over $98 million at current exchange rates) for 500 OLED issued and pending patents owned by BASF in mid-2016.

If one or more of UDC Ventures' investments turns out to yield a promising acquisition candidate -- whether it's the entire start-up business or the compelling intellectual property it creates -- I won't be the least bit surprised if they quickly move to bring it under Universal Display's enormous wings.