Market volatility in 2019 has created some interesting stock-buying opportunities, and vehicle technology company BorgWarner (BWA -0.14%), enterprise asset intelligence (don't worry I'll explain later) company Zebra Technologies (ZBRA 4.89%) and process automation, and climate technology company Emerson Electric (EMR -0.15%) are three of them. To be clear, they all face some short-range headwinds, but their valuations now should be low enough for investors to tolerate any near-term disappointments, and their long-term prospects look attractive.

Starting with valuation matters. As the chart below shows, all three are trading at reasonable forward P/E ratios, and as they're all good at converting earnings into free cash flow (FCF), they also trade at attractive price-to-FCF multiples. 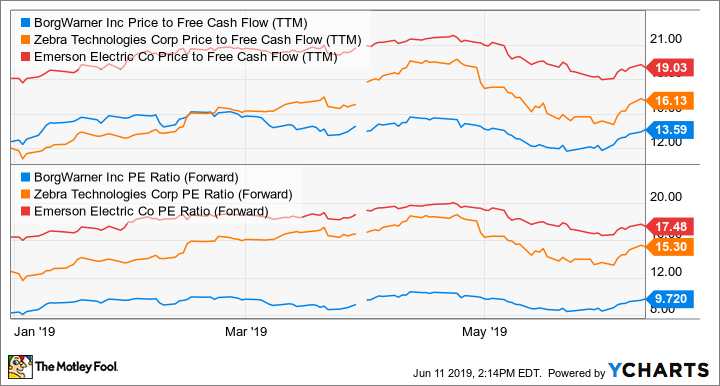 What about near-term headwinds?

Of the three, BorgWarner undoubtedly has the toughest hurdles to overcome. The market hasn't hesitated to sell off automotive-related stocks at the merest hint of a deterioration in the outlook for global light vehicle sales.

Indeed, BorgWarner expects production in its end markets to decline by 2% to 5% in 2019. However, the company has a good track record of outperforming its end markets, and consequently, management is forecasting organic sales for the year will land in a more optimistic range, from down 2.5% to up by 2%. 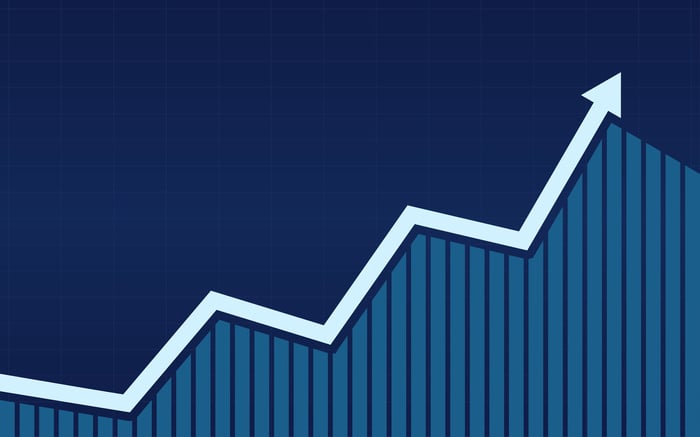 That said, that guidance range is still for contraction at the midpoint. What's more, BorgWarner's earnings declined more than might be expected in the first quarter. So what's so attractive about the stock?

The fact is that the automotive sector is cyclical, and it always has been, so the likelihood is that it will turn upward again. Moreover, BorgWarner is taking actions during the downturn intended to strengthen its competitive position as a parts supplier for a slew of hybrid/electric vehicles due in 2020. In fact, CEO Frederic Lissalde plans reduce annual structural costs by $40 million to $50 million (via restructuring activity that will cost $80 million to $100 million through the end of 2020) and then plow back the cost savings into R&D and new business development.

Analysts expect BorgWarner's EPS will return to its 2018 levels in 2020, which would mean a stock trading at around 9 times earnings, and with decent growth prospects thanks to a stabilizing light vehicle end market, plus the kicker of the company's improved positioning on hybrid/electric vehicle programs.

Things haven't quite turned out as expected for Emerson Electric in 2019. This was supposed to be the year when a rebound in process automation spending arrived, and orders in its commercial and residential solutions segment were forecast to begin growing after their China-led dip into negative territory in 2018.

Unfortunately, performance in both of those segments has been a bit weaker than expected, and when Emerson delivered its second-quarter earnings report in May, management was forced to cut its full-year underlying revenue growth guidance to a 4% to 5.5% range from a previous range of 4% to 7% amid talk of weakness in upstream oil and gas spending in North America. Factor in the recent dip in the price of oil, and the market has reason for concern. https://www.fool.com/investing/2019/06/07/why-emerson-electric-stock-fell-151-in-may.aspx

But here's the thing: Some of the issues holding back oil and gas industry spending -- notably, poor winter weather in the Bakken Field and a lack of takeaway capacity in the Permian Basin -- are likely to be resolved later in the year. In other words, there's a good chance that revenues have simply been pushed into the future. If that's the case, then Emerson Electric looks like a more attractive stock to buy now. 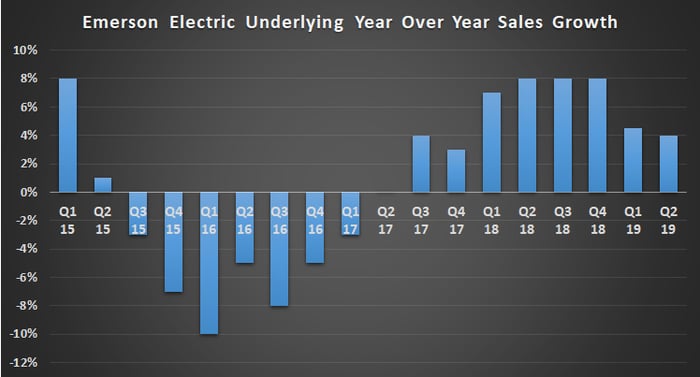 Barcode readers and printers, and handheld devices that capture data from manufacturing, logistics, and retail environments may not seem the sexiest of tech businesses. However, Zebra's solutions are an integral part of gathering the information that enables companies to implement their Internet of Things (IoT) strategies.

As such, they are used or e-commerce fulfillment, smart manufacturing, retail management and warehouse management. Without data capture in a live environment, there can be no data analytics or IoT operability, so Zebra is a key play on growth in intelligently managing assets.

The stock has been on a great run -- it's up 245% in the last three years -- so it shouldn't have been too much of a surprise that it took a bit of a pullback recently, particularly as Zebra imports a substantial fraction of its products from China. The company's recent results looked good, though, and the stock trades at an attractive valuation.

All told, BorgWarner and Emerson Electric look liable to deliver some near-term disappointments to shareholders, but at these valuations, it would take some pretty nasty surprises to prevent them from being good values in the long term. Investors should just keep an eye on global car sales and production figures (BorgWarner) and the price of oil (Emerson Electric).

In the case of Zebra, America's trade conflicts will be key, so listen carefully to what management says about the impact of tariffs on its costs in its next earnings report. Those risks aside, though, all three of these stocks look attractive for long-term investors.