The e-commerce giant's in-house game developer still has at least two titles in the pipeline.

Just as rival tech giants Apple (AAPL -3.00%) and Alphabet (GOOG -1.98%) (GOOGL -1.82%) subsidiary Google are pushing deeper into gaming with subscription services, Amazon (AMZN -1.57%) appears to be taking a small step back. The e-commerce giant's history in the gaming industry is longer than some may realize, dating back over a decade to its 2008 acquisition of game developer Reflexive Entertainment, which formed the backbone of Amazon Game Studios.

Amazon Game Studios is now reportedly getting hit with layoffs. 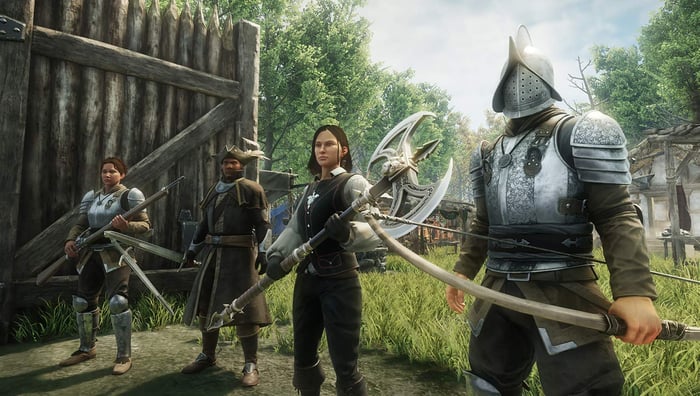 Some unlucky Amazon Game Studios employees are getting the axe. New World will be an online multiplayer role-playing game. Image source: Amazon.

Kotaku reports that Amazon's in-house studio has laid off "dozens of employees," with workers being told that they need to find new positions, potentially in other internal jobs at Amazon. If they are unable to find other positions within roughly two months, they will be laid off with severance packages.

In 2016 at TwitchCon, Amazon Game Studios had announced three new titles that it was working on: Crucible, New World (pictured above), and Breakaway. Amazon owns Twitch, the wildly popular game live-streaming platform, and the games were intended to integrate into the service. Breakaway was canceled back in 2017, but the company had been pushing forward with the other two games, as well as other unannounced projects. Some of those unannounced games have now also been canceled, according to the report.

An Amazon spokesperson confirmed the news to the outlet in a statement:

Amazon Game Studios is reorganizing some of our teams to allow us to prioritize development of New World, Crucible, and new unannounced projects we're excited to reveal in the future. These moves are the result of regular business planning cycles where we align resources to match evolving, long-range priorities. We're working closely with all employees affected by these changes to assist them in finding new roles within Amazon. Amazon is deeply committed to games and continues to invest heavily in Amazon Game Studios, Twitch, Twitch Prime, AWS, our retail businesses, and other areas within Amazon.

The gaming landscape is evolving rapidly, which presents a challenge, as many games take years to develop. Mobile gaming is now 20% larger than all other gaming formats combined in terms of consumer spending, according to a recent report by App Annie. That's why Apple is launching its Apple Arcade mobile gaming subscription service later this year, while Google is creating a cloud-based game-streaming platform called Stadia.

Amazon needs to keep up with the industry's changes, and this "reorganizing" might be a reflection of that.