Upwork (UPWK -5.30%) was a broken IPO at Wednesday's close. It was fixed a day later. The only difference in those 24 hours -- the event that likely spurred the 8% pop in the stock on Thursday that pushed the shares back above last year's $15 IPO price -- is that Fiverr International (FVRR -5.84%) went public in a wildly successful debut. Both companies operate online platforms to provide freelancers with opportunities for work.

Fiverr priced its IPO at $21. The online marketplace for odd jobs across 200 different digital-services categories opened at $26 on Thursday, and it continued to coast higher throughout its first day of trading. The stock ultimately closed near $40, up a blistering 90% for its debut. As another proxy for the gig economy, Upwork also moved nicely higher for the day.

Upwork investors won't mind riding Fiverr's coattails for a day. It was a hot debutante once, too. It opened at $23 in its first day on the market eight months ago. In March, it peaked at $25 -- 67% ahead of its early October IPO -- but it's been a market laggard ever since. Upwork stock has been trading in the teens through the past 10 weeks, and lately it's been weaving over and under its original $15 price tag. 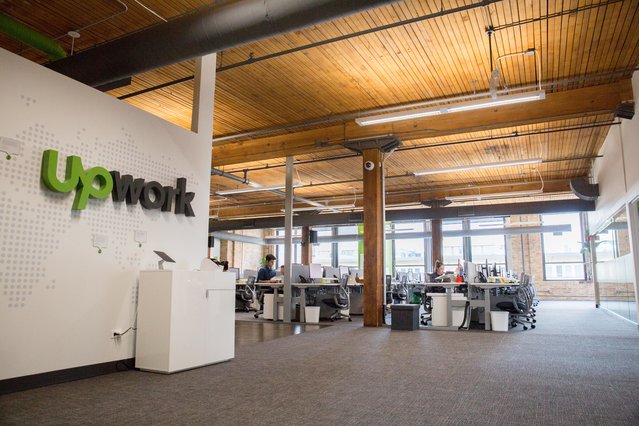 Fiverr and Upwork may be engines for the gig economy, but the models are fairly different when it comes to the buyer profile. Fiverr's appeal is largely for time-strapped consumers or skill-strapped professionals who need someone to perform a one-time digital task. Upwork is geared more toward small businesses that want to farm out work that may develop into ongoing contractor relationships.

Fiverr has evolved from its original model -- which, true to its name, involved various odd tasks that one would be willing to do for just five dollars. Pricing is now all over the map, and naturally the depth of the services provided has also expanded. The numbers still bear out the differences.

Upwork is much larger than Fiverr, dishing out $1.8 billion of work last year; buyers contracted out $293.5 million of jobs through Fiverr. Because Upwork relies on establishing ongoing working relationships after the initial connection is made, its fees decline on repeat jobs. Upwork's take rate worked out to 14.2% in its latest quarter, well below the 25.7% take rate at Fiverr.

In terms of growth, the smaller Fiverr gets the upper hand here. Revenue rose 45% at Fiverr last year, decelerating slightly to 42% through the first three months of 2019. Upwork's top-line results rose 23% last year, slowing to 16% in its latest quarter. Eyeing the other end of the statement, both companies are still posting losses on a reported basis, though after widening deficits in 2018, Fiverr and Upwork saw the red ink contract in the first quarter of this year.

When it comes to top-line valuations, Upwork is the bargain here. It may not seem cheap trading at six times trailing revenue, but Fiverr's multiple is substantially higher. There will be 31.8 million ordinary shares outstanding after underwriters exercise their option to buy additional shares -- and they will, given that the stock is catapulting well above its $21 IPO price. This tags Fiverr with a market cap of nearly $1.3 billion, or more than 15 times its trailing top-line results.

In short, Upwork investors will want to cheer Fiverr on at this point. If the market justifies nosebleed valuations for Fiverr, it will open the door for multiple expansion for Upwork shares. Fiverr fixed Upwork's broke IPO on Thursday, and the coattails are still there for the riding.

Why Upwork Stock Just Went Down Instead
413%