If you've never heard Canadian cannabis producer Aurora Cannabis (NASDAQ:ACB) and big biotech Gilead Sciences (NASDAQ:GILD) mentioned in the same sentence, this will be a first for you. You might not think that Aurora and Gilead have anything in common, but they do. Both companies are currently conducting clinical trials. And both companies have skeptics who doubt how well their stocks will perform over the long run.

Over the last couple of years, Aurora has been the clear winner when it comes to stock performance. It's a different story over the lifetimes of these two companies, though, with Gilead delivering much larger gains (albeit over a much longer period of time).

Which of these stocks is the better pick for long-term investors now? Here's how Aurora and Gilead compare. 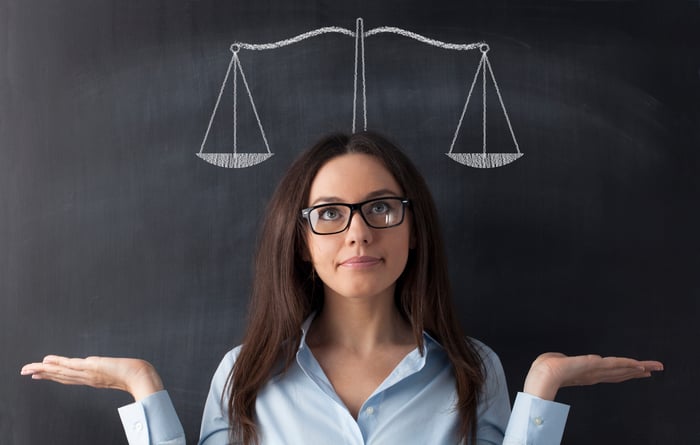 Pretty much everyone thinks that the cannabis market will be huge. But just how big could it be? Aurora executives like to talk about a global cannabis opportunity of around $150 billion. Canada makes up only 6% of that potential market. Aurora estimates that medical cannabis outside of Canada presents a potential market of more than $50 billion of the total, while the global consumer market could top $85 billion.

If we assume that these projections are reasonable, there's still a question of what kind of market share Aurora might be able to capture. The company claims a market share of around 20% in the Canadian adult-use recreational marijuana market. If Aurora could repeat that performance across the world, it could be on the way to annual sales of $30 billion.

Tilray (NASDAQ:TLRY) CFO Mark Castaneda recently predicted that three or four companies will split around 80% of the global cannabis market. Aurora claims the highest production capacity in the industry and is the current leader in international medical cannabis sales. It seems likely that Aurora would be one of those top companies if Castaneda is right.

However, I think it's safer to assume a more conservative market share for Aurora of somewhere between 5% and 15%. That's the range Constellation Brands (NYSE:STZ) used in estimating the potential for Canopy Growth (NASDAQ:CGC) before investing $4 billion in the cannabis producer. The midpoint of that range would give Aurora annual sales of $15 billion using the projection of a $150 billion global cannabis market. Even the low end of the range would mean ginormous growth potential for Aurora.

What about Gilead's growth prospects? The biotech's HIV drug Biktarvy could generate between $6 billion and $10 billion at peak compared to $1.2 billion last year. RBC analyst Brian Abrahams thinks that Gilead's early-stage HIV drug GS-6207 could be a game changer that's even bigger than Biktarvy.

Gilead's cell therapy Yescarta could become another blockbuster for the company. So could anti-inflammatory drug filgotinib, with Leerink projecting peak sales of $3.7 billion. Gilead is also actively developing drugs to treat nonalcoholic steatohepatitis (NASH), a market that some observers think could eventually be worth $35 billion.

It's easy to become excited about growth opportunities with numbers in the billions being thrown around. But both Aurora and Gilead face significant risks.

There are two little details for Aurora that are easy to overlook. First, the U.S. makes up a huge chunk of those big global cannabis market projections. Second, Aurora can't enter the U.S. cannabis market as long as marijuana is illegal at the federal level. Although support is growing for changing federal marijuana laws in the U.S., there are some political dynamics that could mean that won't happen as quickly as many hope it will.

It's also possible that the global opportunity won't be nearly as large as Aurora projects. The black market is still alive and well in many states that have legalized marijuana. There's also the chance that researchers could identify safety concerns that limit the growth of the cannabis industry.

One big risk for Gilead is that its pipeline candidates flop in clinical studies. The biotech has already experienced setbacks with its lead NASH candidate, selonsertib. Even if that isn't an issue, regulatory approvals could take longer than expected. Gilead has run into this issue, too, with the U.S. Food and Drug Administration (FDA) requiring a safety study for filgotinib before the biotech can file for U.S. approval.

Both Aurora and Gilead also face stiff competition. There's always a risk that other companies could simply beat Aurora and/or Gilead in the marketplace.

Investors should also consider the financial positions and valuations of these two stocks. Gilead has an advantage over Aurora in both areas.

Aurora isn't profitable yet. As a result, the company could have to issue more shares in the future to raise cash. The downside to this is that it causes dilution in the value of existing shares. In April, Aurora filed a shelf offering to be able to raise up to $750 million by issuing new securities.

Also, Aurora stock trades at an astronomical valuation that reflects expectations of tremendous growth. Any bumps in the road that hinder the company's progress in achieving that growth are likely to take a heavy toll on Aurora's share price.

Gilead, on the other hand, is highly profitable. It has a big cash stockpile of over $30 billion. The company pays a solid dividend that yields nearly 4%. And the stock is cheap, with Gilead's shares trading at less than 10 times expected earnings.

In my view, the choice of which of these two stocks is the better pick boils down to your investing style.

If you're an aggressive investor looking for ginormous growth, Aurora Cannabis is worth your consideration. Even if some of the most optimistic projections for the global cannabis market don't pan out, the stock could have plenty of room to run over the long term.

Gilead is probably a better choice for more conservative investors. The biotech is a cash cow. It offers a mouth-watering dividend. And with a little luck, Gilead could return to solid growth over the next few years.