Please ensure Javascript is enabled for purposes of website accessibility
Free Article Join Over 1 Million Premium Members And Get More In-Depth Stock Guidance and Research
By Rick Munarriz - Jun 17, 2019 at 8:00AM

Fiverr is a hot debutante, bucking the market's current opinion of gig-economy stocks Uber, Lyft, and Upwork. But that may not last long.

We're living in a gig economy, where apps and other online platforms are giving folks a way to earn some money on the side delivering food, ghostwriting a blog post, or lending a hand with graphic design. The bad news for investors in these companies is that the IPOs over the past year of Upwork ( UPWK -4.78% ), Lyft ( LYFT -4.08% ), and more recently Uber ( UBER -5.96% ) haven't exactly panned out. One of those stocks is barely trading above its IPO price, and the other two are currently underwater.

Fiverr ( FVRR -4.55% ) seems to have broken that mold -- at least through its first two days of trading. The online marketplace for digital odd jobs has soared 50% since going public at $21 on Thursday morning. The stock cooled off on Friday after a 90% pop a day earlier, but it's still the only market beater among the new wave of gig-economy stocks. After ho-hum receptions to three of the best-known champions of the gig economy, Wall Street finally has a winner -- for now. 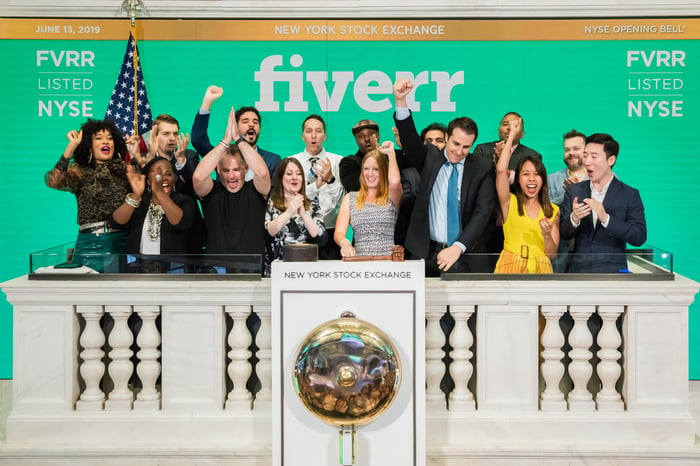 I got Fiverr on it

It may seem odd to see the smallest of the four players thrive. After all, Fiverr's $82.5 million in trailing revenue is less than a third of fellow freelance platform operator Upwork at $263.1 million. The two leading ridesharing services are considerably larger than that, as Uber and Lyft command trailing top-line results of $11.8 billion and $2.5 billion, respectively. Put another way, it takes less than three days for Uber to ring up what Fiverr will be collecting over the course of the year.

Fiverr isn't growing the fastest, though. Sure, with revenue climbing 45% last year and 42% through the first three months of 2019, it's no slouch. And Fiverr is growing faster than Upwork, with just a 16% top-line gain in the first quarter ,and Uber, which decelerated to a 20% increase in the same reporting period. But all three gig-economy players are still well behind Lyft, with its first-quarter revenue surge of 95%.

A logical explanation for Fiverr's success is that it had a more compelling starting line. Even on a fully oversubscribed basis, last week's debutante went public with a market cap of $668 million. Upwork hit the market at $1.5 billion, and the market debuts for Uber and Lyft valued those companies in the tens of billions.

None of the four companies is currently profitable, so there's no point in even attempting an earnings-based valuation. However, if we eye the other end of the income statement, we see the market premiums are surprisingly steady. Fiverr, Upwork, Uber, and Lyft are fetching between six and nine times trailing revenue.

A cautionary note is probably in order. As great as it is to see Fiverr trading 50% above its IPO price after just two days of trading, the three earlier IPOs also had their moments early on. Upwork peaked when it traded 67% above its debut price five months after it hit the market. Lyft and Uber are broken IPOs, trading below their initial prices, but it wasn't always that way: Lyft was fetching 23% more than its $72 IPO price tag minutes into its market debut. Uber hasn't been as fortunate, stumbling out of the gate. However, it was trading 2% above its $45 IPO price when it peaked earlier this month.

The moral of the story is that Fiverr may be the belle of the gig-economy ball, but it hasn't been the only one. Upwork, Lyft, and Uber also seemed to be the exceptions to the rule at one point. Fiverr still has a lot to prove.