Two recession-resistant dividend stocks face off for your investment.

We're over 10 years into the current bull market, and while no one can predict when the next recession will occur, many investors, especially those nearing retirement, might be looking toward relatively "safe" dividend-paying stocks that will hold up in an economic downturn. Two such large low-beta names are Verizon Communications (VZ 0.23%) and PepsiCo (PEP -0.68%).

Verizon is the nation's largest consumer mobile communications service provider, and it's often cited as having the best network. It operates in a U.S. oligopoly, alongside competitors AT&T (NYSE: T), T-Mobile (NASDAQ: TMUS), and Sprint (NYSE: S). Verizon also has smaller operations in wireline broadband and cable through its Fios segment and a small digital media arm called Oath, made up of past acquisitions Yahoo! and AOL. Still, Verizon's main profit center is overwhelmingly its consumer mobile services.

Meanwhile, PepsiCo is one of the world's largest packaged-food conglomerates. Though it's best known for its namesake soft drink, PepsiCo is much more diversified, to the extent that it garners a plurality of its operating profit from its Frito-Lay snack subsidiary. In addition, Pepsi has been aggressively innovating its drink portfolio away from sodas. It recently brought a new sparkling-water brand called Bubly to market, and it extended that market reach by buying SodaStream, an Israeli-based producer of home carbonated beverage machines, last August for $3.2 billion. 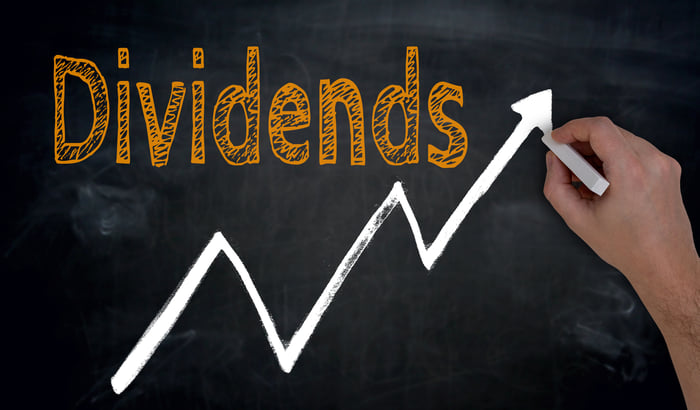 People usually buy large, stable, and relatively low-growth conglomerates like these two companies for safety and their dividends, so let's look at each company's payout: 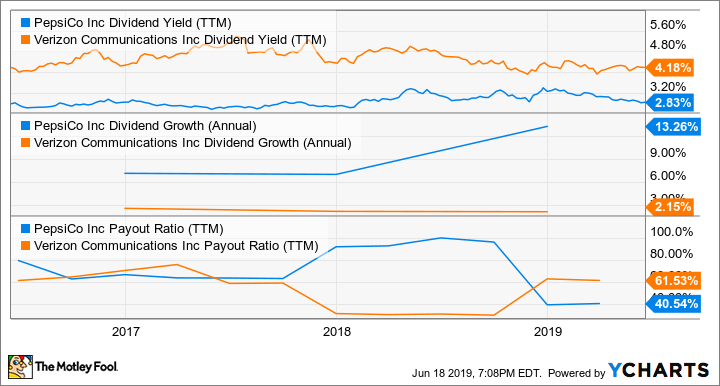 Buying Verizon will get you a much bigger 4.2% annual payout, whereas PepsiCo's dividend yield stands at a lower, albeit decent, 2.8%. That said, Pepsi has traditionally grown its payout at a higher rate, last year boosting its dividend by 13.2%, compared with just 2.2% dividend growth for Verizon. PepsiCo also has more room to continue raising its dividend, with a payout ratio just north of 40%, as opposed to Verizon's 61.5%.

Therefore, those looking for more dividends today may look toward Verizon, whereas those with a longer-term horizon and who would like more capital appreciation might opt for PepsiCo.

Both PepsiCo and Verizon are currently struggling for growth, but Verizon more so. New CEO Hans Vestburg, who took over the company in August 2018, set Verizon on a course of cost-cuts and writedowns – an attempt to retrench and refocus the company on its core wireless operations.

Last quarter, Verizon grew its overall revenue by 1.1% and adjusted earnings per share by 2.6%. However, its most important consumer retail segment exhibited higher growth, with subscribers up 1.5% year over year, revenue up 3.7%, and adjusted EBITDA up 2.7%.

While Pepsi's growth looks similarly lackluster, Pepsi took a large hit from foreign currency headwinds, as it's much more of an overseas player than Verizon. So while the company reported only 2.6% revenue growth, currency and acquisition-adjusted "organic" revenue growth was a much better 5.2%, and "core organic" operating profit grew 10%.

While currency was a headwind last quarter, international markets are a potential growth engine for Pepsi, as these markets are less penetrated than the mature U.S. market. Last quarter, PepsiCo's Latin America, European, and Asian segments grew 10%, 8%, and 10%, respectively, adjusted for currency and acquisitions. Therefore, it appears Pepsi might have the better growth prospects.

On the other hand, Verizon is investing heavily in 5G networks, which will power many future applications and could very well lead to pricing growth for the telecom giant in the future. Nevertheless, the impact and timing of 5G growth is still unclear at this point and in fact may underperform expectations. So while Verizon may seem like a more exciting technology play, it still appears Pepsi has an easier path to growth, both organically, through bolt-on acquisitions like SodaStream, and through international markets.

It's a bit difficult to compare Pepsi and Verizon's valuations, as Pepsi traditionally garners a much higher consumer-staples multiple and currently trades at a high 24 times forward earnings. In contrast, Verizon's low forward P/E ratio of around 12 is indicative of its low-growth, capital-intensive business. So while Verizon is the "cheaper" of the two stocks, that has always been the case, and it hasn't stopped Pepsi from outperforming Verizon over the past three years. 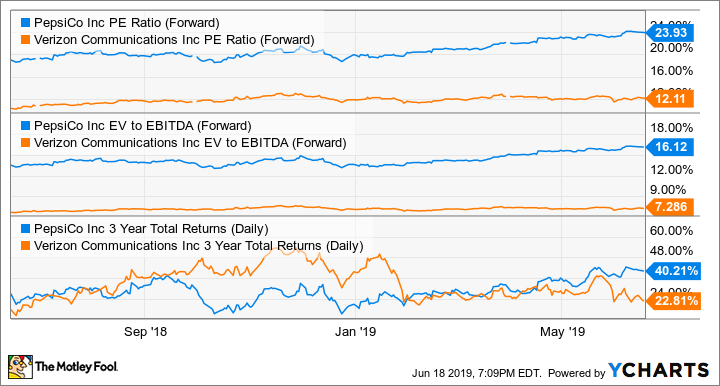 With its low growth but higher payout, Verizon is akin to a fixed-income equivalent, whereas Pepsi offers at least a modicum of growth and price appreciation. Therefore, unless you need the extra 140 basis points of yield, PepsiCo would be my pick.