Please ensure Javascript is enabled for purposes of website accessibility
Free Article Join Over 1 Million Premium Members And Get More In-Depth Stock Guidance and Research
By Keith Speights - Jun 21, 2019 at 8:00AM

This technology is intriguing and could change how cannabis and CBD are bought and sold. But are there any great investing opportunities?

Automated teller machines (ATMs) revolutionized the banking industry. Customers were able to withdraw or deposit money anytime they wanted. Waiting times in lines inside the bank were cut drastically. And banks made more money as their operational efficiencies increased.

Now a somewhat similar technology holds the potential to disrupt the cannabis industry. Fully automated cannabis kiosks use robotic arms and even artificial intelligence (AI) to enable customers to purchase cannabis and cannabidiol (CBD) products without interacting with a human.

There should be tremendous potential for this technology, with 33 U.S. states having legalized medical cannabis, 11 with legal adult-use recreational marijuana markets (including Illinois, which plans to launch its legal recreational pot market in 2020), and hemp CBD now legal at the federal level in the U.S. But can investors profit from the rise of the "pot-bots"? 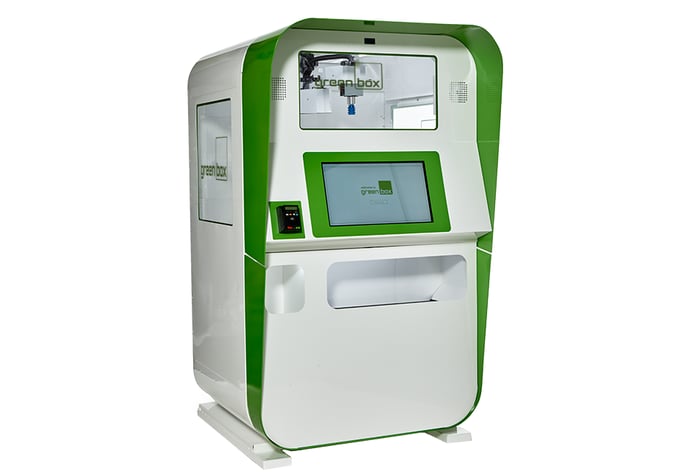 Why the technology is so appealing

One cannabis kiosk that's been available for a while already uses military-grade biometrics to authenticate customers by scanning their finger veins to ensure they're of a legal age to purchase cannabis products. Customers use a touchscreen display to select from a variety of products. Once a customer has chosen the cannabis products that he or she wants to purchase, payment can be made using cash, coins, or a credit card. If there's a problem (such as running out of a particular cannabis product), the kiosk alerts the appropriate staff.

A newer type of cannabis kiosk that launched earlier this year has even more bells and whistles. It uses facial recognition to authenticate customers. The system also uses a touchscreen interface that allows customers to select multiple cannabis products in one transaction. Customers can get detailed information on the differences between products to help them make their purchase decisions. The kiosk even uses AI to make customized recommendations based on the customer's buying patterns in a similar way to what Amazon.com does.

Once the cannabis products are selected, a robotic arm retrieves and dispenses the items. The customer even gets to watch the robot at work through shatterproof glass. Payment can be made using credit cards, debit cards, Apple Pay, or Android Pay.

While all of this makes shopping for cannabis or CBD products easy and convenient for customers, the companies that operate the cannabis dispensaries win, too. Just as banks did with ATMs, cannabis retailers improve their operational efficiencies and can tremendously boost their revenue per square foot.

Key players in the market

Several companies offer cannabis kiosks. And while there are similarities between the companies' technologies, there are also key differences.

GreenSTOP takes a different approach with its Smart Dispensary. Customers can preorder cannabis products using smartphone apps and pick up the products at the kiosk later.

Grasshopper's cannabis kiosks authenticate customers by scanning their ID cards. Frank Mayer and Associates' kiosks support only self-ordering -- after a customer places an order for cannabis products, the kiosk prints a ticket that they can bring to the counter of the dispensary to check out.

As promising as this technology is for the cannabis retail industry, investors don't have many options to profit from the potential growth in the use of cannabis kiosks. Of the five companies mentioned that sell cannabis kiosks, only one is publicly traded.

That one outlier is American Green. The company made less than $300,000 in revenue in its last reported quarter and lost over $1 million. American Green is a penny stock with a very low market cap. That's not the kind of stock that most investors would want to buy.

Another investing angle is to go with the stock of a company that supplies key technology for cannabis kiosks. One possibility is IBM ( IBM 1.03% ). The technology giant acquired Datacap in 2010. Datacap supplies the payment processing technology used in Greenbox Robotics' systems. The problem, though, is that any cannabis technology sales for IBM amount to only a drop in the bucket for the company.

What about investing in public companies that could benefit from using "pot-bots"? Curaleaf ( CURLF 0.11% ) announced in May that it's acquiring the Select brand and operations from Cura Partners. Select used Greenbox Robotics' marinabox kiosk in an exhibit at the SXSW conference and festival in Austin, Texas, earlier this year. Again, however, it's still way too early for the technology to make any dent on Curaleaf's prospects.

The bottom line is that, at least for now, there aren't any great alternatives to invest in what could be a disruptive technology for the cannabis industry. Investors will have to look elsewhere for opportunities to profit from cannabis. The good news is that there are quite a few of those opportunities available.