The truck maker's stock looks like a good value as long as you're willing to take a long-term view.

If you ever want to know the difference between a long- and short-term investment perspective, just open up a conversation about trucking stocks. The earnings of stocks like truck makers PACCAR are highly volatile as they depend on the cyclicality of truck sales and production, and short-term investors will constantly fret about the near-term trends in truck sales data. A long-term investor, however, will understand the cyclicality and focus on the underlying development of the business. Let's take a look at what you need to know from both perspectives before deciding to buy PACCAR stock.

As you can see in the following chart, U.S. heavy-truck sales are highly cyclical and so investing in the industry can be very tricky. Furthermore, in the topsy-turvy world of cyclical investing, it often happens that valuations are at the highest when truck sales are bottoming and at their lowest just as truck sales are peaking. 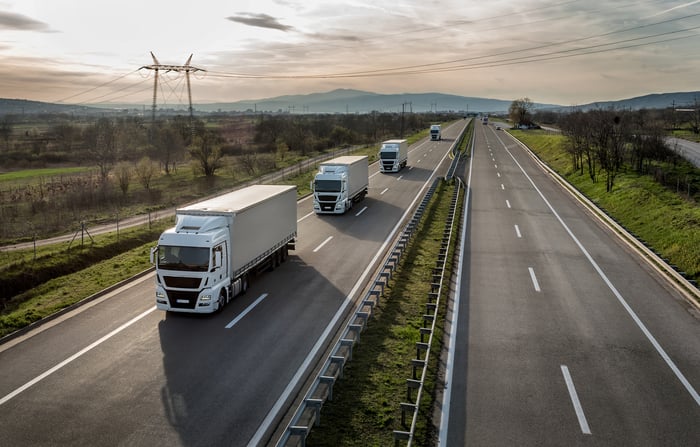 This is because investors are pricing in the dramatic improvement in earnings when the cycle turns upwards (they bid up the stock in anticipation) and sell off the stock when earnings are about to decline in line with falling truck sales. Truck engine maker Cummins -- a supplier to PACCAR and Navistar -- is included in order to demonstrate industry fundamentals 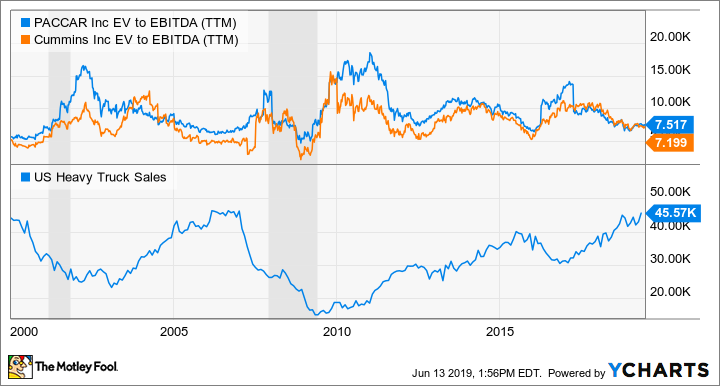 In this sense, it becomes very important to play a kind of guessing game over when truck sales hit a peak or a trough and every subtle adjustment in guidance is followed. Thus, the fact that all three trucking companies above have raised their forecast for industry sales and production through 2019 is a large part of the reason why the stocks are up around 22% (Cummins and PACCAR) and 32% (Navistar) so far this year.

Class 8 trucks are defined by the Department of Transport as heavy duty single-trailer trucks with three or four axles.

That said, a peak will surely come and most investors have focused on the outlook for industrial production in the U.S. and internationally. With most market commentators expecting U.S. economic growth and industrial production growth to slow in the next couple of years, it's likely that truck sales/production will fall at some point.

As we've seen above, short-term investors might want to anticipate the peak and then bail out, and that's their prerogative, but what about the long view over a stock like PACCAR?

One way to do this would be to normalize PACCAR's growth rate on its long-term trend line -- this helps to avoid pricing the stock in during the peak or trough periods of sales, after which you might apply the average margin during the last cycle in order to calculate what the underlying trend-line sales and earnings actually are. 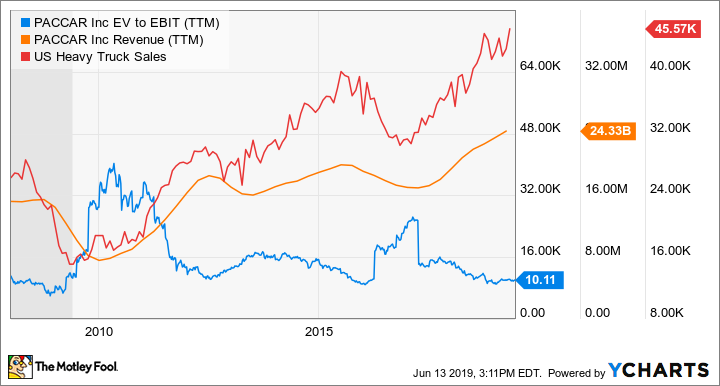 Based on previous calculations, the long-term revenue growth rate is 3.3% per annum -- this looks reasonable when compared with nominal US GDP growth in the last decade. Projecting forward and using the last trough in 2013 as a base means that trend line sales for PACCAR in 2019 are around $20.8 billion -- compare this with the market forecast for $23.6 billion and remember that we are not using this figure as it probably represents a peak.

Applying the 11% earnings before interest and taxes (EBIT) margin to the $20.8 billion figure gives a trend-line EBIT of $2.29 billion. With the current enterprise value (market cap plus net debt) at around $30.5 billion, it implies a theoretical EV/EBIT multiple of around 13.3 times.

Is PACCAR a good value?

Putting all this together, the theoretical EV/EBIT multiple of 13.3 times -- recall that is an attempt to normalize its earnings across the cycle -- implies that PACCAR is a good value. The way to think about the 13.3 times multiple is that it's the valuation with the cyclical highs and lows stripped out of it. In other words, it's comparable to what a consumer staple or a defensive healthcare stock -- whose earnings are far less cyclical -- might trade at.

Given that some of those companies trade at high teens EV/EBIT multiples right now then PACCAR looks good value for investors who want to take a long-view and also believe in the future of the trucking industry.

Why Shares of Navistar Are Soaring Today
397%