The ridesharing companies will have to hike fares to arrest slowing growth and mounting losses.

The much-hyped IPO machine of Lyft (LYFT 4.50%) and Uber Technologies (UBER 4.39%) got off to a stuttering start as investors took note of the red flags these companies were waving before going public. The good thing is that stocks of both ridesharing specialists are finally trading above the prices at which they made their debuts. But don't expect them to keep climbing, because they are caught in a double whammy.

Lyft and Uber's IPO filings revealed that they are in deep losses, while the latter went on to make it clear that it may not be able to achieve profitability. But that's not going to cut it on Wall Street, where stock prices and earnings performances matter the most. Investors and analysts will want answers as to how Lyft and Uber plan to get profitable, and there's one obvious answer to this question: higher fares. 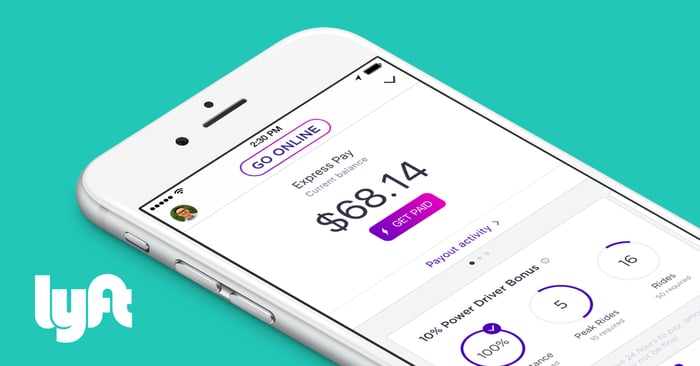 When the money runs out and going public is a good way to kind of -- obviously they can access capital but now they've got to report and they've got to be responsible. And lots of people are looking at this and saying, "Yeah the party could in fact be over."

Maney's words are right on point given the losses Lyft's and Uber's IPO filings revealed. Lyft incurred a loss of $911 million last year, a significant jump from the 2017 loss of $688 million. The company's 2016 loss was $682 million.

Lyft has already warned investors that its losses will increase in the future thanks to international expansion and subsidized rides to boost ridership. The company brought some relief to investors when it reported a slightly smaller adjusted loss in its first quarter as a public company.

But the outlook clearly told us why the company could think of hiking fares. Lyft expects top-line growth of 59% to 60% in the second quarter as compared to the prior-year period. That seems great at first, but you shouldn't forget that the company's revenue jumped a whopping 95% during the first quarter.

What's more, investors won't like the full-year outlook either, since the company expects its adjusted EBITDA loss to fall between $1.15 billion and $1.175 billion. That would be a big jump from the year-ago period's figure of $943.5 million.

On the other hand, Uber's IPO filing revealed a loss of nearly $2 billion last year, and its first-quarter results indicate that things won't be improving anytime soon. Uber delivered an operating loss of just over $1 billion in the first quarter of 2019 as compared to $478 million in the year-ago period. Don't be surprised if these losses keep on climbing. According to the company's S-1 filing:

We have incurred significant losses since inception, including in the United States and other major markets. We expect our operating expenses to increase significantly in the foreseeable future, and we may not achieve profitability.

But that's not how Wall Street works. Once revenue growth starts slowing down and losses balloon further, Lyft and Uber will have to find a way to show profitability to save their stock prices from crashing. Raising fares is one way to do that, because such a move will boost Lyft's and Uber's top lines and help arrest losses.

Be ready for an expensive ride

Uber and Lyft customers have already been struck with fare hikes this year thanks to a minimum-wage law for drivers, which is expected to raise an average driver's pay by $9,600 annually so that they are not underpaid.

This poses another threat for Uber's and Lyft's bottom lines: The two companies will have to contend with driver unions across the globe wherever they think of starting operations. Any further increases in driver wages will most likely be passed on to customers in due course, leading to fare hikes.

In fact, Uber has been hiking fares regularly to pull in more revenue. For instance, the company raised its fares by 10% in the Indian market in 2017, followed by a 15% hike last year, according to research firm RedSeer Consulting. What's more, The Guardian reports that the ridesharing companies are not passing on the benefits of surge passing to drivers, in what seems like an underhand attempt to increase revenue.

This isn't surprising, since Uber's IPO filing revealed that the company has witnessed a big slowdown in revenue growth. The company's top line was up 42% in 2018 after a much more impressive increase of 106% the prior year.

The company's first-quarter results showed that revenue increased by just 20%.

Now that both Uber and Lyft are public, it won't be surprising to see them come under more pressure to deliver consistent revenue growth and reduce losses. This is why riders need to be ready for bigger holes in their wallets. The likes of Lyft and Uber will likely have to resort to fare hikes to satisfy Wall Street's demands; otherwise, their stock prices could take a hit on account of slowing growth and higher losses.