Two big names in their respective industries top analyst projections, while Target sets its sights on a monster rival. 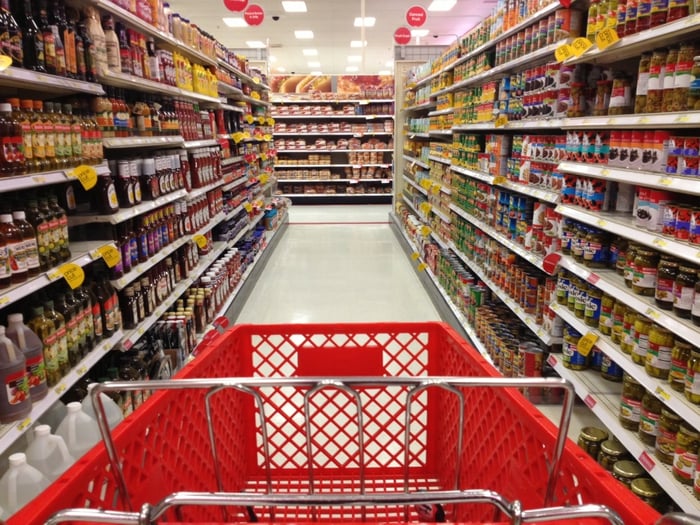 Flash memory specialist Micron Technology (MU -0.72%) is one of the most actively traded stocks tonight, plus one of the market's big gainers.

It's not hard to see why. The company's Q3 2019 results, posted after market close, handily beat analyst estimates and calmed some investor nerves. For the quarter, Micron's revenue was $4.79 billion, a 39% year-over-year decline. The company's non-GAAP (adjusted) net profit saw a steeper fall, by 69% to just under $1.20 billion ($1.05 per share).

However, since Micron is facing a host of challenges -- weak prices for the types of memory it produces, the relationship with pariah Chinese tech giant Huawei, among other headaches -- the market was expecting worse. On average, analysts were projecting a top line of $4.69 billion and only $0.79 in per-share adjusted net profit.

Micron also proffered guidance for its current Q4. The company is anticipating revenue of $4.3 billion to $4.7 billion, with adjusted per-share earnings coming in at $0.38 to $0.52. The latter range is well below analyst estimates of $0.61.

Regardless, investors seem happy the company has done better than many anticipated. Micron's shares are currently up almost 8% from their closing price earlier today.

FedEx Q4 results are fine, but the future is fuzzy

Turning the page on the Aftermarket Earnings Report logbook, we have FedEx (FDX 0.93%). Like Micron, the logistics giant reported its latest quarterly results after the shuttering of the stock market.

That top-line number was essentially in line with the average analyst estimate, while the earnings figure exceeded projections. Prognosticators were anticipating only $4.85.

Despite the bottom-line beat, investors aren't rushing into FedEx stock at Micron-ish levels. It's up only marginally in post-market trading.

Perhaps one reason for this is the company's inability to provide meaningful guidance for fiscal 2020. It said this was due to difficulties estimating the financial impact of a company retirement plan. It added that it expected higher revenue and operating profit in its FedEx Ground and FedEx Freight units, although it did not get more specific.

This evening Target (TGT 1.26%) announced a new initiative called Target Deal Days. This July 15 and 16, the sprawling retailer will offer "thousands" of discounts and deals to shoppers. Pointedly, the company said that membership in the company's Target Circle loyalty program will not be required to take advantage of these come-ons.

If the timing of Target Deal Days sounds familiar to you Amazon.com (AMZN 0.25%) shoppers, it should. July 15 also happens to comprise Amazon's Prime Day, which is to be extended to July 16 this year, doubling the existing Prime Day. Similarly, Amazon rolls out a dizzying number of deals on its wares during that self-created retail holiday.

The key difference between Target Deal Days and Amazon Prime Day(s) is that the latter requires membership in Amazon Prime, the online retailer's popular loyalty program.

Target said that holders of its REDCard debit and credit cards would receive the standard 5% discount with those means of payment during Target Deal Days.

Investors seem to be meeting this news with a shrug in after-hours action -- Target stock is up only marginally, as is Amazon's. Yet it's a sensible, if reactive, move by Target to steal some of Amazon's summer thunder, and it'll produce an intense (albeit brief) battle for American consumer dollars.

Amazon Calls a Truce With FedEx

3 Stocks for the Booming E-Commerce Market

3 Stocks to Watch Next Week: Adobe Systems, FedEx, and CarMax