There's still room for growth in the business -- but in the stock price? Not so fast.

Shares of Grubhub (GRUB), still the leader in the market for on-demand delivery of takeout food, have struggled in recent months -- down 29% over the past year in a market that is up 8%.

That could be about to change, however, and one analyst is shifting from a neutral to a positive stance on Grubhub in anticipation of the stock's outperformance. Here's what you need to know. 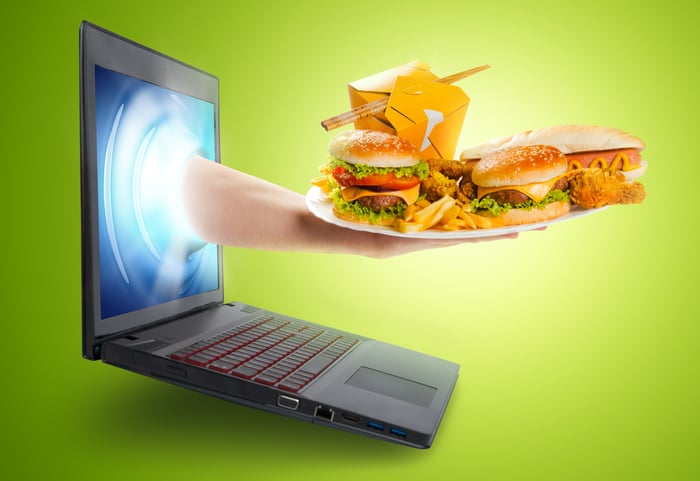 This morning, Citigroup announced it is upgrading Grubhub from neutral to buy, with a new $91 price target that implies there's a more-than-20% profit to be earned from the stock.

Why? Well, according to Yahoo! Finance, most bankers believe Grubhub is set to grow its earnings at about 25% annually over the next five years. Initially skeptical of that estimate, Citi now believes that if the company succeeds in growing its gross food sales (GFS) at a 20% annualized rate, then this will generate delivery network "efficiencies" by permitting drivers to transport food from multiple outlets on their delivery runs.

If that happens, according to Citi, then those other analysts' consensus forecasts will be "less at risk," and Grubhub will be better able to hit the targets Wall Street has set for it. At the same time, StreetInsider.com tells us that Citi is seeing "robust" and even accelerating strength in the market for food delivery. Between them, these two trends have convinced Citi to raise its own forecasts for the company.

Hoping these birds of a feather will flock together (to Grubhub)

So what is it that's making Citigroup so confident that Grubhub will grow GFS at 20% -- aside from the general strength of the food delivery market, that is, which also benefits Grubhub competitors such as UberEats and DoorDash?

As the analyst explains, "We recently came across data suggesting that GrubHub may be in early tests with MCD, SBUX and other large chains, which could drive ... potentially new diner and GFS growth over time." In addition to all the extra business the company would gain from servicing delivery sales from these restaurants, the added volume should generate efficiencies for drivers servicing multiple orders on their runs.

Furthermore, Citi says Grubhub has instituted a new "formula" for how it pays drivers servicing such "batched orders" (multiple deliveries made on a single run) that could boost its profit margin.

Pulling all these predictions together and tying them up with a bow, Citi opines that once market participants get wind of these developments, "investor interest" could surge, and as a result, investors should be willing to pay a higher multiple (to earnings) to own Grubhub stock.

And this, in a nutshell, is what probably really what is making Citi optimistic about Grubhub: The combination of earnings growth (the E in the P/E formula) being turbocharged by investors willing to pay a higher multiple on those earnings, resulting in a much higher price for the stock.

Still, the question remains how much of a multiple it's reasonable to expect Grubhub to attain?

Assume Citi is right -- about the other analysts being right -- that Grubhub can grow its earnings at 25% per year over the long term. This still leaves shares selling for a multiple of more than 56 times trailing free cash flow, and 128 times trailing earnings. Both of these multiples, it appears to me, are rather high for a 25% grower like Grubhub.

Don't get me wrong: I still think Grubhub is a great company providing a valuable service. And yes, it's cheaper than it once was. It's just that even after its recent relapse, its stock price has more than tripled over the past three years.

I personally think most of the profits in Grubhub stock have already been made -- and there's little room left for shares to go up from here.

Grubhub's Stock Could Still Soar Higher Before It Gets Acquired
397%